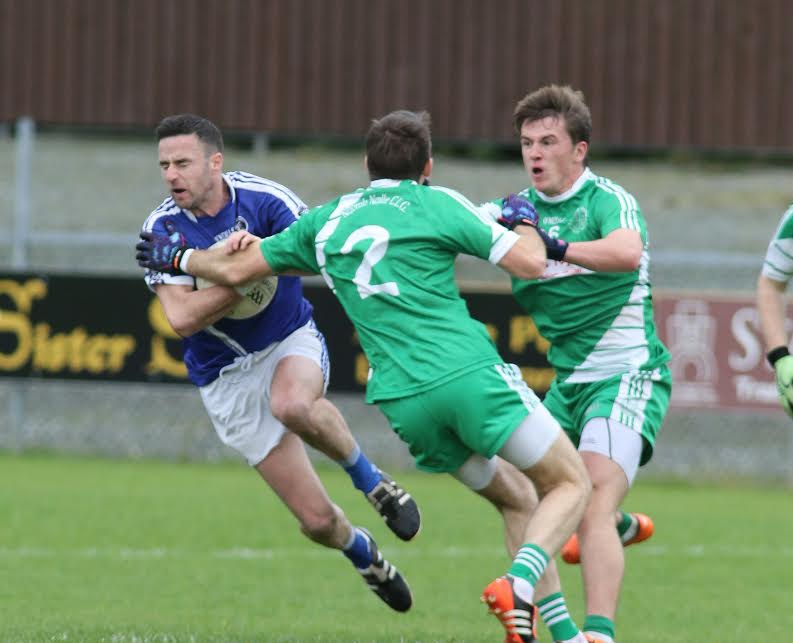 Edward Kane’s injury time point earned St Naul’s a replay as the Mountcharles men came back from the brink to deny Gaeil Fhánada in the first Intermediate semi-final.

For Gaeil Fhánada, it will surely have felt like a defeat as they let a seven-point leap erode away and the teams will have to do it all again with the replay likely to take place next weekend.

St Naul’s might even have won it but, having been to the pin of their collar for much of the contest, they’ll gladly go another day.

It was a strong second-half from an energised St Naul’s.

The impressive Brian McVeigh led the way for Gaeil Fhánada, the Portsalon man rising to the occasion with six splendid points, but they were left dejected as their advantage finally fell. 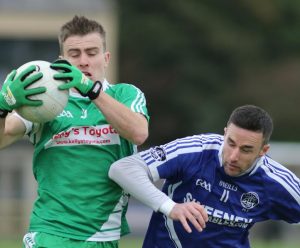 It was a real game of two halves with Gaeil Fhánada having a seven-point lead at the height of their dominance, but John McNulty’s half-time team talk worked wonders for St Naul’s, who were a different proposition against a tiring Gaeil Fhánada as the clock ticked through a tense second half.

When McVeigh, with seven minutes remaining, was uncharacteristically wide with a free, the seeds of doubt were growing and it wasn’t long before St Naul’s were level.

Eoghan Carr restored the Gaeil Fhánada lead once more but, despite kicking three wides in those nervous last few minutes, St Naul’s secured another bite at the cherry when Kane stroked over.

The sides shared four early frees before McVeigh got the ball rolling from a free that ignited the Gaeil Fhánada fuse.

Jimmy Coyle arched over magnificently and a soaring effort by Michael Sweeney – whose display with surely have caught the watching eyes of Declan Bonner and Paul McGonigle – from out on the right-hand side, had them in a position of strength with three points in as many minutes. 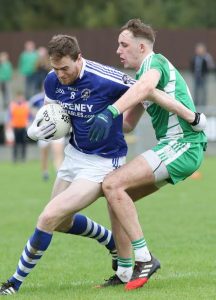 McVeigh made a difficult free, off the ground and about 40 metres from goal, look routine, as he sailed his kick beautifully between the sticks.

Stephen Griffin got St Naul’s off the mark in the 12th minute, but Gaeil Fhánada reeled off another four-in-a-row.

McVeigh effortlessly strode into St Naul’s territory and floated over and the imposing figure of Sweeney powered on two, both having an equal measure of composure and intent.

McVeigh burned Brendan McCole to stretch the lead further, but Gaeil Fhánada were spared somewhat as Sweeney, already booked for a foul on Stuart Johnston moments earlier, escaped the ultimate sanction for a hit on Barry Griffin in the final minute of the opening half.

St Naul’s, who had pipped Glenfin in a low-scoring quarter-final, were almost out of the game before they were in it.

Griffin, though, did deliver a reminder of his prowess with a fine point from an acute angle on the left-hand side, but Gaeil Fhánada were six in front, 0-8 to 0-2, at the short whistle. 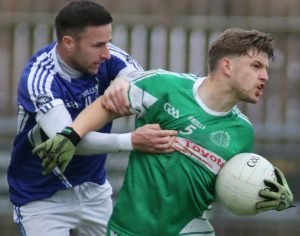 St Naul’s showed much better on the resumption and, with Stephen Griffin and Peadar Mogan pointing the way, the Mountcharles men were back to within three points by the 41st minute.

Indeed, they might have been closer, but Cathal Lowther had a goal chalked off as referee James Connors blew for a foul on Griffin, rather than give an advantage that ought to have resulted in a goal. While Griffin appeared to have been fouled for a penalty, a free in was the result and Griffin tapped it over.

When Griffin was fed by John Rose in the 49th minute – when the margin was three points – the former Donegal panellist was denied by a fine save from Gaeil Fhánada goalkeeper Brendan Friel.

Soon, though, Gaeil Fhánada were reeled in – a game that was in stark contrast to a semi-final two years ago when Gaeil Fhánada themselves rose from the dead to force a draw against Naomh Colmcille.