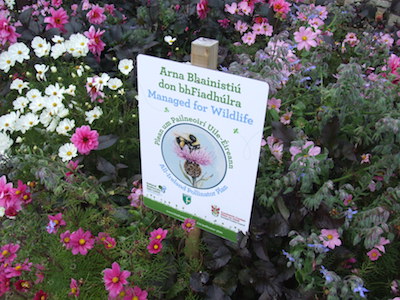 The winners were announced at the National Tidy Towns Awards in The Helix, Dublin City University today.

Joseph Gallagher, County Donegal Heritage Officer, explained “The focus of the award is on biodiversity and the crucial role that the declining population of Irish bees play in the pollination of our plants, trees and vegetables. The award encourages local groups to implement pollinator-friendly actions in their towns and villages.

“The award contributes to the achievement of the All-Ireland Pollinator Plan. Among the measures implemented by Buncrana Tidy Towns were selective mowing, the planting of pollinator-friendly plants, the installation of bee boxes/hotels, the erection of signage highlighting areas managed for biodiversity and the delivery of public talks on wildlife.”

There was a great response this year with 70 applications nationwide from 24 counties; a 20% increase on the number of entries from last year.

The standard of the applications was very high.

Like the other regional award winners, Buncrana Tidy Towns will collect a €1,000 prize.

There is an annual prize of a national winner and four regional award winners in two categories and other winners included Maynooth, Carrigaline, Clonmel, Askeaton, Ballycanew and Ballintubber. Geashill, County Offaly won one of the regional prizes and the overall national prize.