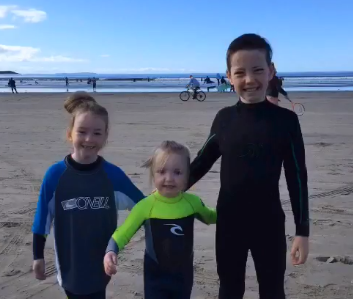 Noah Clinton has taken to YouTube to share his fantastic experience at this year’s Liquid Therapy AS Open.

Noah, who has autism, is a huge fan of Liquid Therapy and has been attending classes for the past 3-4 years.

Liquid Therapy provides a supported environment that allows individuals of all abilities to experience the fun and benefits of water therapy.

Established in 2011, they provide young people with the opportunity to experience surfing, who may have difficulties in mainstream classes.

The award-winning foundation has its base in Donegal’s surfing hub, Bundoran, and it runs solely off of donations.

On the 17th of September, they hosted a surfing festival to finish off the surfing season on a high.

Noah Clinton (9) from Manorcunningham, was one of the participants at the AS Open, and video blogged his fantastic day.

Noah and his sisters Amelia (7) and Olivia (3) all have autism, and enjoy the one-on-one sessions with Liquid Therapy volunteers.

Their mum, Clara, told Donegal Daily that this year’s AS Open was an incredible experience for the whole family.

“Families from across Ireland came to Rossnowlagh to attend the AS Open, it was open to anyone who had taken part in Liquid Therapy sessions throughout the summer.

“It was a great day out for everyone, and all of the children got a medal at the end.”

The Liquid Therapy classes are run by volunteers and Clara says that the lessons are invaluable.

“All three of the children enjoy it, and it gives me peace of mind to know that the sessions are one-on-one.

“It can be hard to send them to things that won’t be one-on-one incase they get lost in the crowd, so it’s great to know there is someone looking after them.”

Noah and Amelia have been taking part in surfing lessons for the last 3 or 4 summers, with little sister Olivia giving it a shot this summer!

“Olivia had her first go at Liquid Therapy, and it went really well!”

“The water does something for them, it’s always been a kind of therapy for them, ever since they were babies. They’re in their element when they’re in the water. Noah absolutely loves it and goes as far in as he can and jumps over the waves. It’s a very calming activity and allows them to get involved.

“I’m very proud and delighted with them all, it was so nice to see smiles on all of their faces.”

“Tom Losey is fantastic, he does everything and organises every bit of it. He’s a really great guy. The lessons are all free and they work from donations. Everything is provided such as the wetsuits and surfboards.”

Noah’s fantastic filmmaking skills came in handy during the day, as he video blogged the entire event.

Noah has been running his own YouTube Channel for a little over a year, with the screen name ‘Firetwomp 69’ and puts a lot of work into his many fantastic videos.

To learn more about Liquid Therapy, you can visit www.liquidtherapy.ie