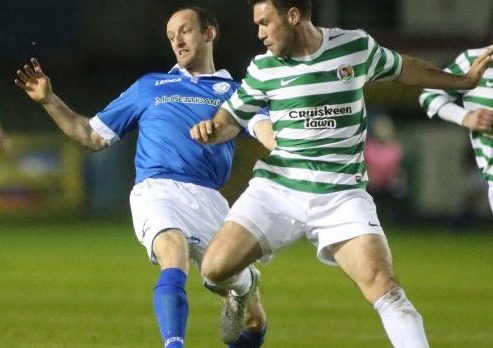 Ulster Senior League: Cockhill’s McDermott aiming to get back to his best

Malachy McDermott has missed the last 15 months, but the Cockhill Celtic ace is aiming to get back to his best again.

Cockhill have been the dominant force with five USL League and Cup doubles in a row and this Sunday Gavin Cullen’s men begin their search for an unprecedented sixth successive Four Lanterns Ulster Senior League crown.

Cockhill head for Ramelton to face Swilly Rovers; a repeat of the game that saw them clinch the title last season when Jimmy Bradley’s goal secured a narrow 1-0 win.

McDermott – the 2013 FAI Intermediate Player of the Year – was an uncomfortable and reluctant spectator last season but last Friday returned to full training for the first time since rupturing his anterior cruciate ligament last July.

“I’ll be there for the Swilly game, hopefully in the squad, but there will be no 90 minutes in me yet,” McDermott says.

“For now, I’ll just be down and be a part of the squad. Training last week went well, but the injury is still in the back of the head yet.

“It’s a confidence thing, I think. I do want to get back in as quick as I can. I could find myself holding back a bit. I did a couple of sessions, one with (John) McElroy and one with Garhban (Friel), but I’ve a wee bit to go yet.”

It was in a Junior A Football Championship game against Downings in July 2016 when, as he explains himself, his knee got overloaded.

He says: “It was nothing to do with twisting, it was hyper-extension and it popped out the back. I tackled a man and in came another man; it was just pure weight overload.

“I went down, got up and it wasn’t too bad. Or that’s what I thought, anyway.”

Initial scans in Letterkenny told him he had swelling and bruising, but that his ligaments were ‘intact’. But a visit to Ray Moran and the Santry Sports Clinic confirmed his worst fears: He would need an ACL rebuild.

“It’s different to coming back from an ankle injury.

“It’s hard watching. I got to a few games last season and I probably should have been back earlier for pre-season, but I was back at the Gaelic for a while and concentrating on that.”

Cockhill collected another League and League Cup double, but McDermott sat in his chair at the Ulster Senior League’s presentation function.

That presentation night was memorable for McDermott for another reason, however as he was named at centre-back on the USL ‘Eleven30’ team – a team to commemorate 30 full seasons of the USL. Following Gerry Gill’s signing for Greencastle, McDermott is the only member of the ‘Eleven30’ selection still playing in the USL.

He says: “That was a great honour to be named on that team. It was something too that meant I wanted to stay in the USL. People be asking away if I’d not just go and play in the Inishowen League, but it’s too early to do that. I still want to get back at it in the USL.”

How Cockhill have kept on keeping on is one of the mysteries to the rest of the USL, but the thirst still hasn’t been quenched after all their silverware.

McDermott says: “It’s just been pure professionalism. Donal (O’Brien) first brought that to us and Gavin has taken it on again in terms of how we set up and working on different aspects of the game. We discuss what we do and we practice it at training. We always have the bulk of our players out and that’s a massive difference.

“There’s no better training or preparation than coming up against the likes of Jimmy Bradley. It’s proper good temp and not just an aul passing drill. It’s all about working on our game. You can’t do that with 10 or 11 players, but we get every man coming out most of the time.”

McDermott knows well that Cockhill will face a stern test of their grip on the Four Lanterns USL title this time around, although Cockhill have strengthened considerably themselves.

He says: “You can sense that there is more of a push on now. Fanad and Bonagee have made big signings with Tony McNamee and Michael Funston. That is a sure sign that teams are going for it and then you obviously have Letterkenny who took in (Sean) McCarron, a class act.

“You hear of big signings like that and you know it’s going to be a tough battle.”

The remaining game in the Donegal News Ulster Senior League Cup, Group A, between Cockhill Celtic and Derry City Reserves, was postponed from this weekend and a new date for the game will be arranged in due course.

Ulster Senior League: Cockhill’s McDermott aiming to get back to his best was last modified: September 26th, 2017 by Stephen Maguire