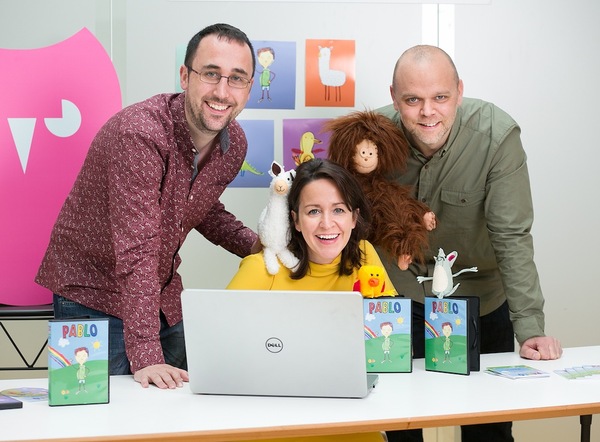 A children’s production spearheaded by Letterkenny woman Grainne McGuinness will bring autism into a new focus on TV from next week.

Children in Ireland and the UK can tune in to learn about Pablo in the first ever programme to have an entire core cast who are on the autism spectrum.

Pablo explores the world through the eyes of a 5-year-old boy with autism and has been praised as a ground-breaking production by Belfast-based company Paper Owl Films.

Grainne McGuinness is the Creative Director at Paper Owl Films, who led the creation and production of the cartoons which launch on RTEjr and CBeebies next Monday, October 2nd at 9am.

Paper Owl Films is headquartered in Belfast and was established as Indee Productions in 2012 by Grainne McGuinness, alongside her husband Stephen Petticrew and business partner Gavin Halpin (also from Letterkenny).

Pablo is named after the genius artist Pablo Picasso, reflecting the creative mind of the central character.

The 52 episode series tells the story of a five-year-old boy on the autism spectrum who uses his creativity – and magic crayons – to invent an imaginary Art World filled with animal characters which help him make sense of social situations and process confusing or anxious thoughts and feelings.

Pablo is not based on experts’ accounts of autism, but on the real life experiences of people with autism. With up to 1 in 100 children being diagnosed with autism in Ireland, the programme brings the disorder to a mainstream audience and to young people in a fun and educational way.

Schoolboy Jake Williamson, aged 11, voices the central character. The show is based in Northern Ireland and contains many local young people as voice actors.

Grainne was inspired by her nephew Lucas, 11, to create the show. She saw Lucas, who has Asperger’s, having difficulties in his early years and having regular meltdowns.

“I was looking at a situation when he was playing with his cousins and thinking wouldn’t it be great if the kids around him understood a bit more about what his perspective on the world was.

“I just thought, ‘wouldn’t it be great to have a TV show that would do that’ and so that’s what Pablo is,” Gráinne told Belfast Live.

Grainne said: “Every child will love Pablo. He’s funny and smart and has a terrific imagination which takes him on wonderfully colourful adventures, which young audiences will want to share. He also sees the world differently, and thinks and processes things differently.”

“The series celebrates that difference, inviting viewers to see the world through the eyes of a child with autism, and to be enthralled and entertained by the view. The hope is to begin a new, more optimistic conversation about autism.”

The cast and crew of Pablo

Pauline MacNamara, Executive Producer with RTÉJr said: “RTÉjr has been pleased to support and champion Pablo from development stage. It has been a long journey and we’re very excited to bring it to our viewers. Paper Owl’s, and in particular, Grainne’s commitment to enabling people with autism to tell their stories and to bring an understanding of their perspective to all has been as steely as it has been impressive.”

Animation services were provided by Kavaleer Productions in Dublin.

A second series was commissioned by CBeebies in November 2016, a year ahead of delivery, which is a first for the children’s channel. BBC has also commissioned Paper Owl Films to make: eight short films featuring Real World ‘Pablos’ – children with autism talking about their daily lives; four visual-effects films which reconstruct the everyday experiences of a pre-schooler from an autistic perspective, and six mini-games, featuring Pablo and his imaginary animal friends.