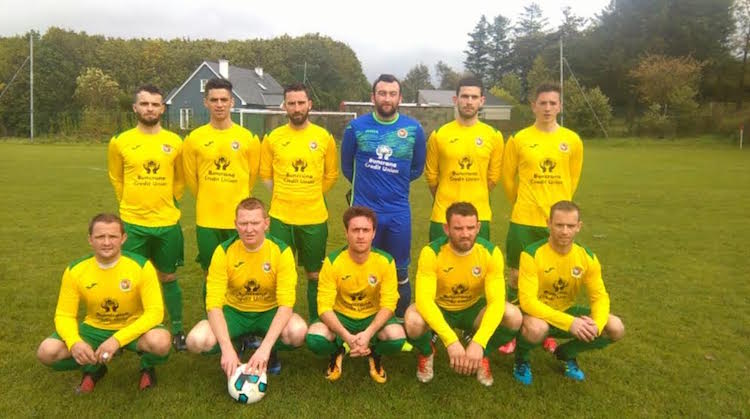 For Laurence Toland, it was a perfect homecoming as the Ramelton man helped himself to to a hat-trick and the sight of one of their own in such rich form will have felt like a dagger through the heart of the Swilly faithful.

Toland scored twice in a first half where Cockhill cemented the notion that their fingers won’t be prised easily off the handles of the League trophy.

Gavin Cullen’s team were four-up at the break, Toland’s double following Ryan Varma’s opener and a Garbhan Friel penalty. With Toland, Mark Coyle and Mark Moran registering in the second half, Cockhill had plenty to spare.

Cockhill took the lead when Varma beat Friel at his near post after Swilly failed to clear their lines form a corner. Against a side of Cockhill’s venom, defending this generously has fatal consequences and the lead goal was a jolt for the home side.

They did, though, come within a lick of paint from equalising immediately but Ryan McDaid hit the crossbar after he found himself with only Cockhill ‘keeper Gavin Cullen to beat.

Toland had been lively in their early moments; denied by Friel and then rounding the Swilly netminder, but settling for a corner.

Swilly had justifiable cause to contest the award, but David Adetuyi’s contact was enough to prevent a goalscoring opportunity for Ronan Doherty and Michael Connolly pointed to the spot. 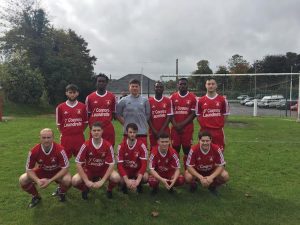 Toland struck twice in the five minutes before half-time, turning home Derek Doherty’s cross at the near post and his second was a wonderful strike, a first time hit from 20 yards that flew past the helpless Friel.

Garbhan Friel had spotted Toland lurking, his ball across the area was inviting and Toland had already  the target in his crosshairs by the time he was arching his back and sending a sweetly-struck effort to the back of the net.

The ordeal, indeed, might have been worse had William O’Connor managed to hit the target when Friel could only palm away Ronan Doherty’s dangerous free kick, while Jimmy Bradley headed wide when he connected with another set piece soon after.

Seven minutes into the second half, Ronan Doherty crossed and Toland slid home his third before being replaced by Paul McKinney.

Cockhill’s strength in depth was paraded at will here. Toland was replaced by Paul McKinney after his third goal and, with Lee McCarron, Moran and Coyle, along with former FAI Intermediate Player of the Year and USL ‘Eleven30’ midfielder Malachy McDermott coming off the bench, the talents available to Cullen and Cockhill are certainly considerable.

Coyle, who was on Finn Harps’ books last season, bagged the sixth as he wonderfully steered home after Friel made the play and, with time almost up, Moran slid beyond the advancing Friel to twist the knife a little bit further.

Back in January, Swilly sent ripples of shock through the USL when they defeated Cockhill – handing them a first League defeat in some 72 games in the process – but a repeat upset never looked on here, even if Gerry Crossan’s inexperienced charges battled for as long as they could.