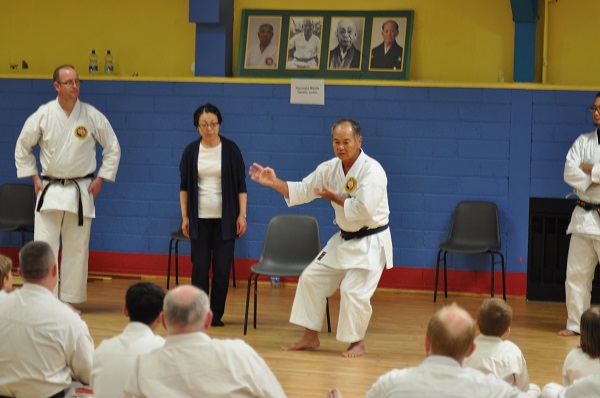 A local karate dojo recently hosted a prestigious and historic karate and kobudo event in Donegal.

The event was hosted by Okinawa Shogen-Ryu Karate-Do Ireland and headed by Michael Quinn 5 th Dan who hosted 3 Okinawan teachers for a 10 day period.

This was the first time an Okinawan karate event of this scale was attempted in Ireland, and it proved to be a highly successful one.

Large numbers of karate students from all around Ireland attended to train with Kiyomasa Maeda in a 3 day open seminar, including a number of senior Shotokan instructors and their students, plus a good number of Shobayashi, Matusbayashi and other styles. The event also seen karate people travelling from Canada and the USA.

Kiyomasa Maeda is the highest ranked karate teacher to have ever visited Ireland. His visit drew a lot of interest, and additionally from martial arts students with an interest in training in Yamane Ryu kobudo (weapons) in which Maeda, Sensei holds a 9 th Dan rank.

Michael Quinn is a direct student of Maeda, and he travels on an annual basis to train at the main dojo in Itoman, Okinawa, Japan. Michael teaches out of the Makoto Shogen-Ryu Karate Dojo which is based between Letterkenny and Ballybofey both adult and children’s karate classes.

During the 10 days that the Okinawan teachers spent here, it provided lots of learning opportunities for both Michael and his students.

There were several classes daily in the Makoto Karate Dojo in both karate and kobudo, and all students got a chance to have their kata and techniques checked. All of the students, both adults and children also the chance to speak with the Okinawan teachers. The teachers all stayed in Michael’s house, and this provided additional opportunities to ask questions and get a more in-depth insight and knowledge about karate.

Following on from this seminar, plans are already well underway for another seminar in Ireland in the near future.

Billy Reynolds who taught Shotokan in a Drogheda based dojo was so impressed with the Shogen-Ryu system that he has made the decision to transition to from Shotokan to Shogen-Ryu, and has formally asked Michael to be his teacher.

There are also a number of other clubs in Ireland and around Europe who are in the process of moving to the Shogen-Ryu system under the guidance of Michael and negotiations are well underway.

Following the seminar has been a very busy period for Michael. He has been requested to teach a number of seminars both in Ireland and around Europe.

He has also had a number of clubs who are currently training in sports karate regularly attend his dojo to train in the life protections applications which is the original purpose of Okinawan karate. His dojo is open to anyone who has a genuine interest in learning either Okinawan karate or kobudo regardless of their current style or system.

Rank testing also took place for some of the local students, and this was overseen by the Okinawan teachers in the Makoto Karate Dojo.

Michael is the most senior instructor on Okinawan karate in Ireland to both train directly with an Okinawan teacher, and also to take the grading examinations and to grade on Okinawa.