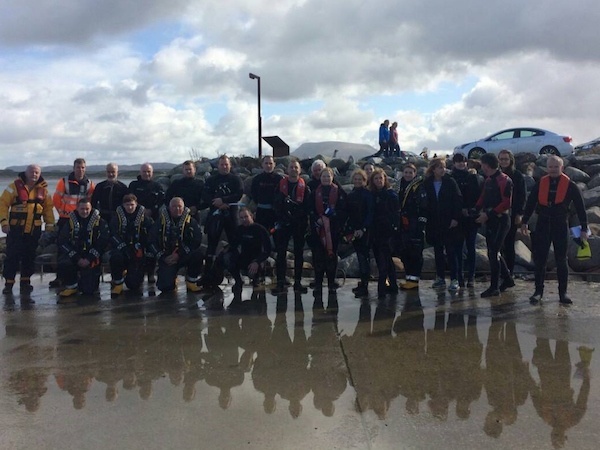 On Saturday morning Sheephaven divers conducted their annual fin swim in memory of former club member John McGarvey, who passed away some years ago.

Until recently the fin swim was from Burtonport to Arranmore, with occasional variations by swimming to Gola Island.

Initially, the plan this year was to return to the Arranmore route, but poor weather conditions late last week ruled that out on safety considerations.

Once again the event was led by Hugo Mc Fadden and the event was supported by club safety boats, while the Coastguard provided a reassuring watch nearby.

As in the past the Mc Garvey family were present to see the swimmers off from the pier in Magheroarty and welcome them ashore over an hour later when they reached the pier on Inishbofin Island.

Sheephaven divers have finned out to Inishbofin in the past and were very impressed by the pristine waters and unspoilt nature of the island.

It was the same again this year, with crystal clear waters throughout the swim, but in particular for last section of the journey as they got closer to the island, while the day was blessed with a welcome break in the recent poor weather with a few hours of glorious sunshine.

Finally a big thank you to the owners of Coll’s pub in Magheroarty, who donated the refreshments, for which everyone involved, was very much appreciative off.

How my unwanted dog got me through...

Countdown is on to ‘Get your Car...