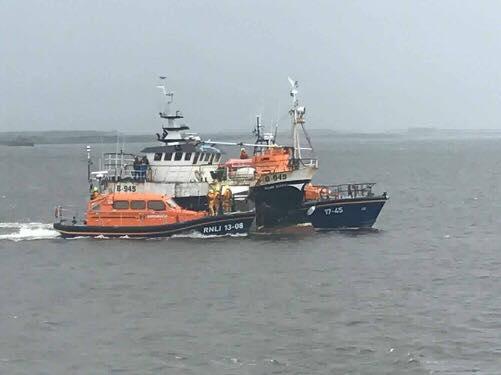 Six fishermen have been safely rescued after a lengthy 15 hour mission in rough seas off Malin Head.

A fishing vessel was successfully towed into Greencastle yesterday after a long challenging effort from volunteers of the Portrush Lifeboat Service, with support from Lough Swilly RNLI.

A 15m fishing vessel suffered engine failure approximately 10 miles north of Malin Head on Sunday night. The Portrush RNLI launched their all-weather lifeboat under Coxswain Mark Mitchell and with six crew members onboard, and made its way to the scene in stormy conditions.

The weather was overcast with showers and moderate seas as the boat launched but conditions progressed to a force 8 south westerly gale as the lifeboat approached Malin Head.

The lifeboat arrived on scene at 00.45am and the crew assessed that the six fishermen were safe and well before working with them to establish a towline.

With a tow set up, the lifeboat proceeded to take the fishing vessel into Lough Swilly. However, with deteriorating weather conditions and with both the tide and wind against them, a decision was made to tow the boat into Greencastle.

During what was a slow tow, the lifeboat was assisted by Lough Swilly RNLI’s all-weather lifeboat which launched at 8am and assisted in bringing the fishing boat into Greencastle and putting the boat on its moorings.

The Portrush crew arrived back at their station at approximately 1.15pm on Monday.

Speaking following the call out, Keith Gilmore, Portrush RNLI Lifeboat Operations Manager said: ‘This has been a long and challenging call out for our volunteers in what were rough weather conditions but they were delighted to have been of assistance to the six fishermen who we would like to commend for doing the right thing and raising the alarm when their boat sustained engine failure.

‘This call out is a fine example of volunteers showing their willingness to forgo a night’s sleep and the comfort of a warm bed and some food and using their skill and experience to face challenging weather conditions to help bring others to safety.’