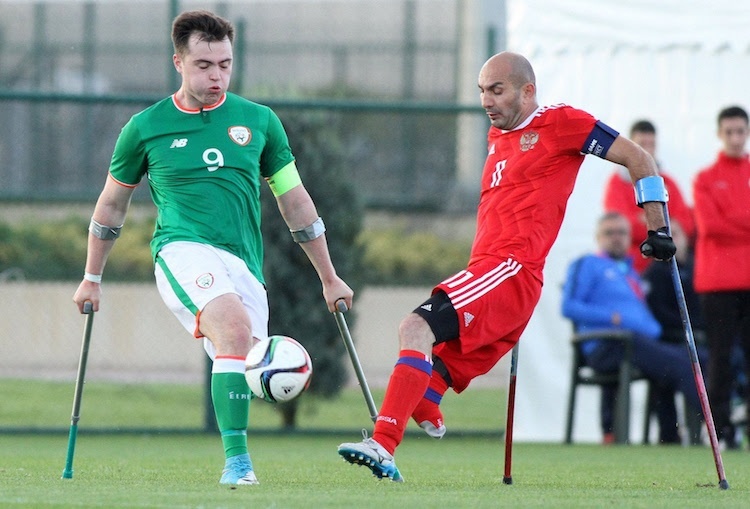 James Boyle played a captain’s role with a goal and an assist as the Irish Amputee Football Team defeated Greece 4-0 to reach the quarter-finals of the EAFF European Championships in Turkey.

The Dungloe man – pictured above against Russia – is captaining the Irish side and led the way with a goal after just 40 seconds as Ireland claimed a big win in Riva.

Boyle also set up a goal for Christy McElligott, who netted another goal with Kevin O’Rourke also on the mark.

Earlier in the week, Ireland lost 2-0 to Russia and yesterday they were narrowly beaten 1-0 by England.

Boyle’s goal today was his 13th Irish goal in his 32nd appearance.

“We have put a lot of hard work into this and we’re seeing the rewards now.

“We were unlucky against Russia and England, but there’s nothing we can do now about those games. The main thing is that we’re through to the quarter-finals.”

The Letterkenny Institute of Technology student – who was born with fibular hemimelia, a birth defect where the fibula bone is missing – had his left leg amputated when he was just six years old.