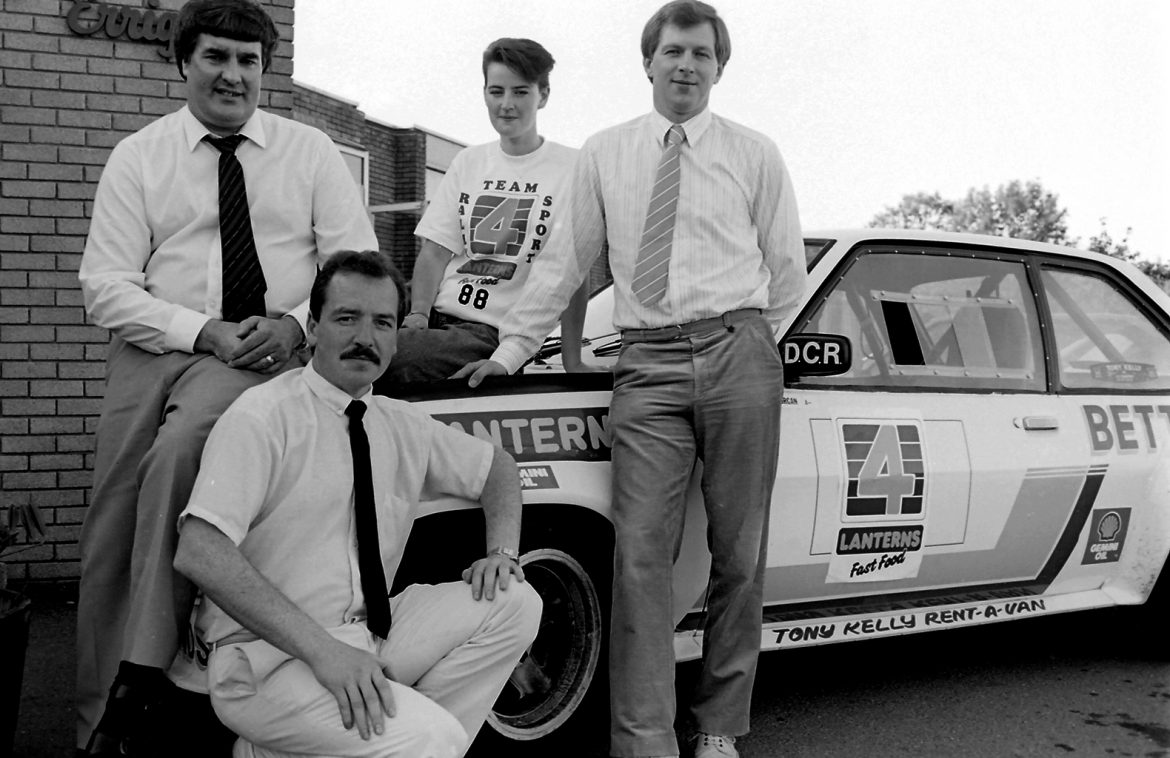 There is something very raw looking at this plain white Opel Ascona 400 in this small workshop at the back of a motor factors here in Magherafelt this evening in Co. Derry.

It’s a Thursday and it’s way past the deadline for this motoring column and Mario the sign designer is still not happy with the heat in his workshop as he starts to put the lettering on an Opel Ascona 400 for Donagh Kelly who will drive this iconic looking car this weekend on the Harvest Rally based at the Shandon Hotel. 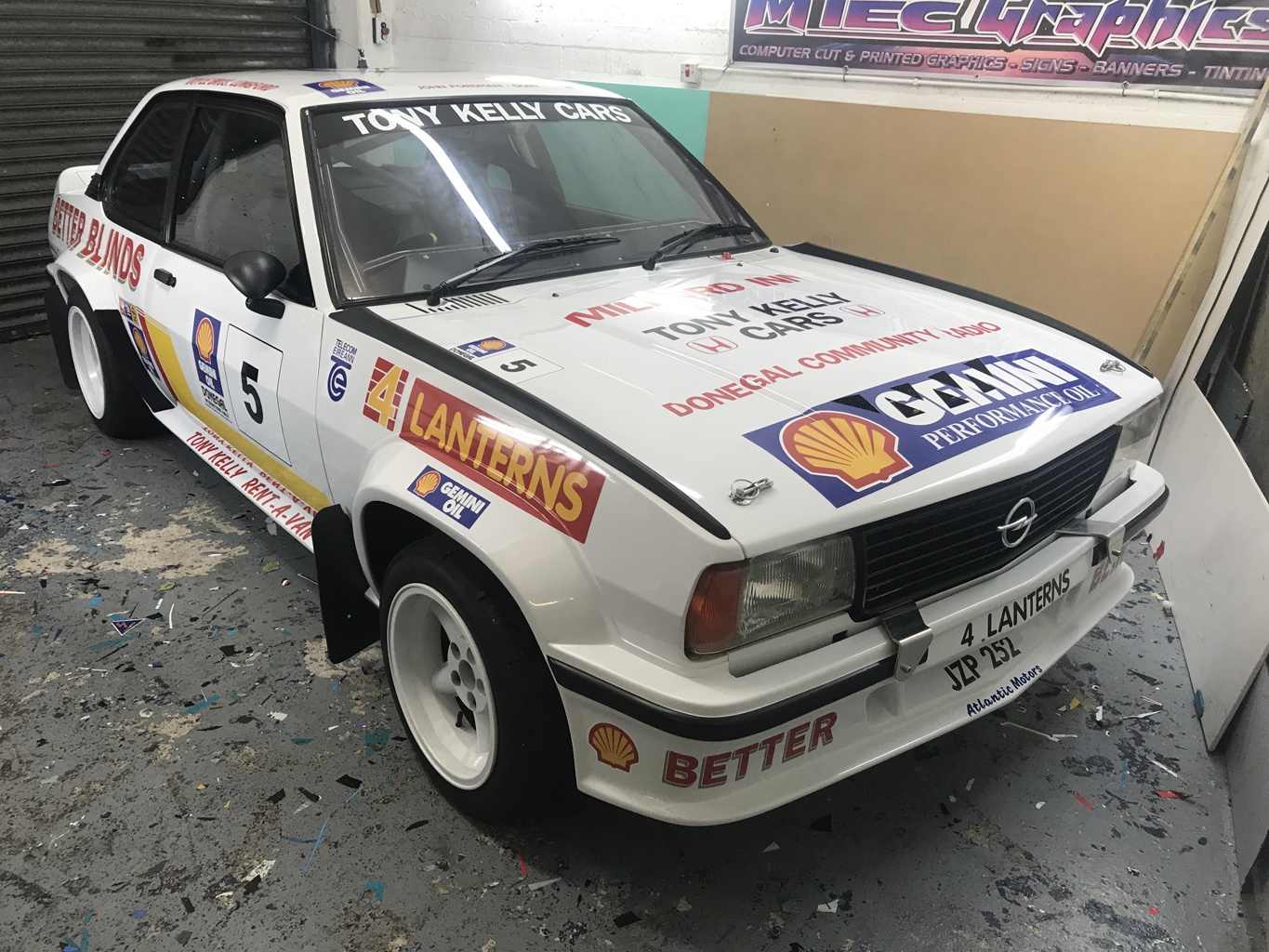 A recreation of James Cullen’s Opel Ascona 400 by Donagh Kelly pictured as the final touches are put on to it for the Donegal Harvest Rally this weekend. Photo Brian McDaid

About two weeks ago I got an early morning call from Donagh Kelly to see if I had any old photos of James Cullen’s old Opel Ascona. He was trying to recreate one of the greatest memories in Donegal rallying by a local driver, James Cullen for the 1988 Tarmac Championship.

Meanwhile in Magherafelt Barney Mitchell, in his Mtec Graphics room is printing out the names of some of the companies that supported James Cullen in them great years. Some of which are no longer with us.

The year 1988 was one of the first big attempts by James Cullen to win his home event. Back in the days, it was sign writer like Barry Mackey and John Baird who painted the sponsors on by hand.

All through this day in Margherafelt, two friends, no longer with us are running through my head as we wait on this car to get finished.

Ellen Morgan
There will never be another Ellen Morgan, I still can hear the way Ellen pronounced Donegal when she was interviewed for television. She was such a lady and one of the greatest ambassadors for both the Donegal International Rally and for James Cullen. Ellen was part of a crew that experienced a lot of nearlys on their way to a double win of the Donegal International Rally. 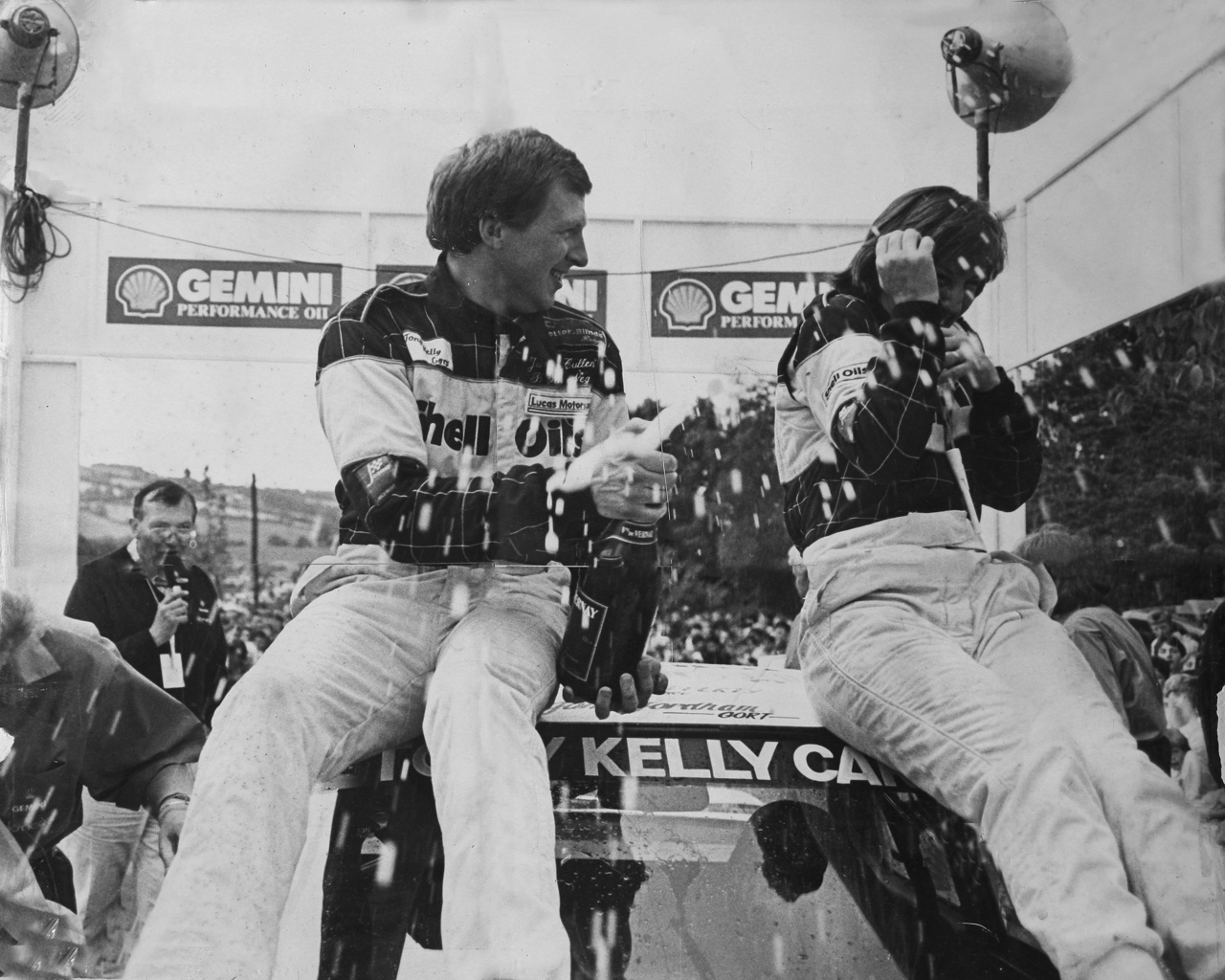 James Cullen and the Late Ellen Morgan celebrate one of their two wins in the Donegal International Rally. Photo Brian McDaid

But in 1988 it was second overall on both the Galway and the Donegal International Rally to the late Mark Lovell in his work Sierra Cosworth in two of the greatest battles of that era. James Cullen brought his battered Ascona so close to the more advanced Turbo Sierra of Mark Lovell that year.

Frank Grimes
He is the second person I am thinking of and how proud Frank Grimes would have been watching the Four Lanterns going on the bodywork of the white Ascona this afternoon. Frank was another person who had so much belief in the ability of Letterkenny man James Cullen throughout his career. 1988 was one of the big years. And at the start of that season back in 1988 Frank sent me out to get a picture of James Cullen’s new Ascona which he got a print of for all the outlets of the Four Lanterns. 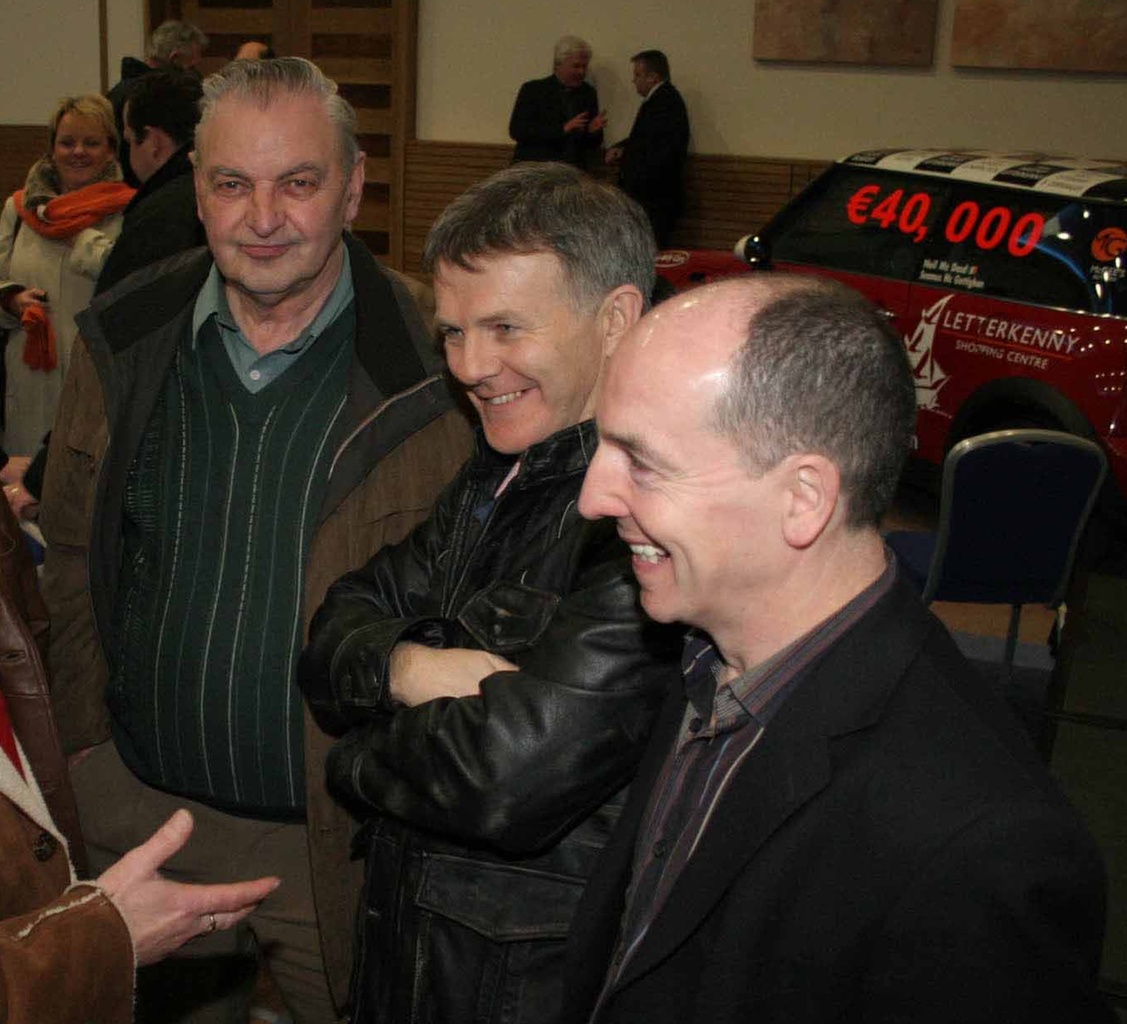 Sponsors down though the year the Late Frank Grimes with Tony Kelly with Rory Kennedy who was one of his priest navigators. Photo Brin McDaid

Not unlike today we were running away behind by the time the car was ready for the photographs. We had a junction up Glencar not far from James Cullen’s home where the photos were taken. The whole town seemed to know about our photoshoot that night and all the cars parked at the junction made it look like a real special stage. We even had a stand-in double wear Ellen Morgan’s helmet that night to make the photo look more realistic. 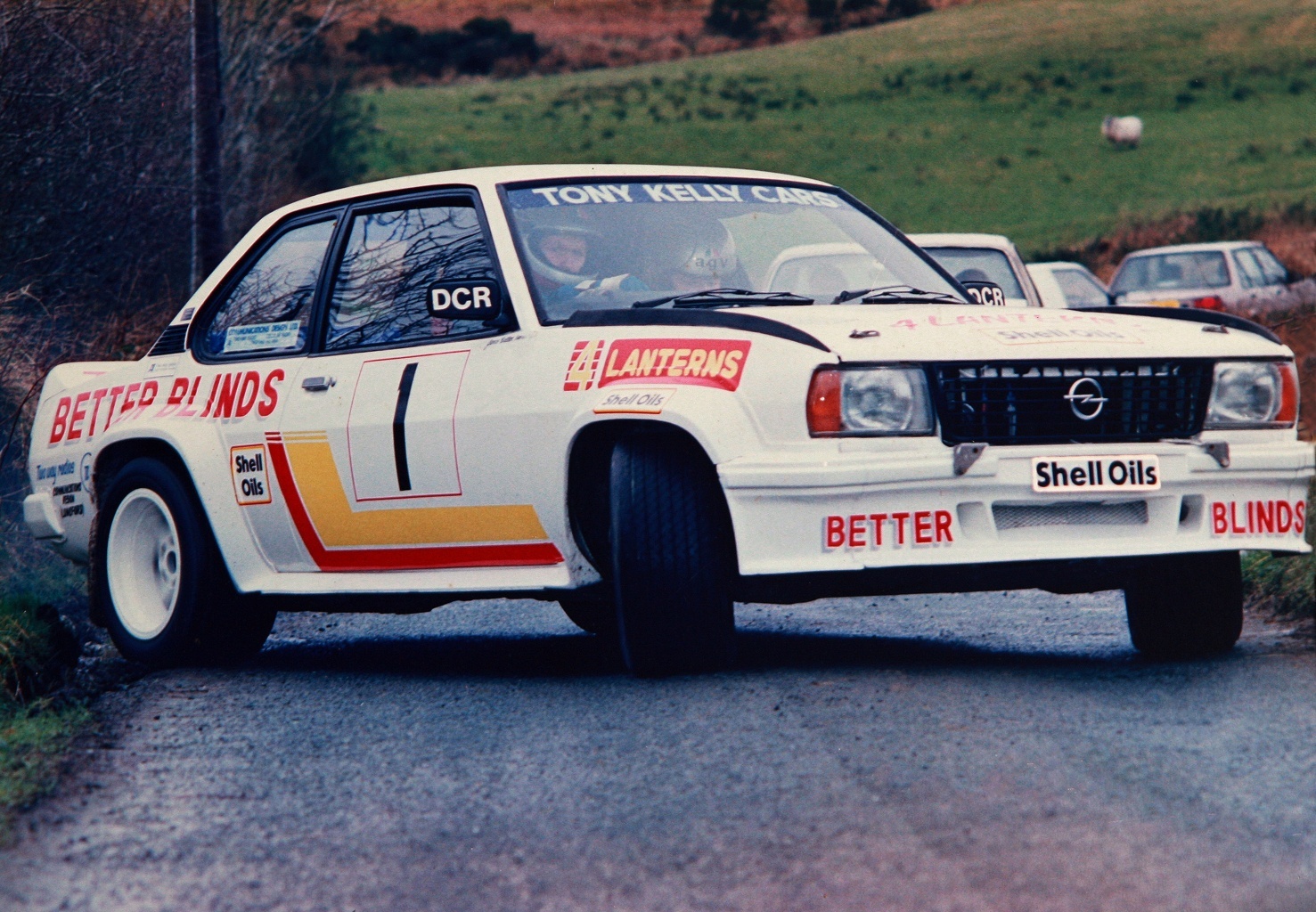 A view of James Cullen Ascona 400 in 1988 at the start of one of his best rallying seasons.. Photo Brian McDaid

Frank Grimes was one of those people who steered James Cullen in the background with much needed financial support through the Four Lanterns Takeaways. He also encouraged others to come on board with much-needed sponsorship for James Cullen in his rallying.

’round the roundabout
The story goes when this Opel Ascona first became available to James Cullen his brother George who also was a sponsor through his company Better Blinds, went up to collect the car. George thought he might drive it home or part of the way anyway. At a certain roundabout on a day not unlike this one the surface was wet on the way round and the Ascona started to drift out a little, George kept her at it and on the way out of the junction he was stopped by an R.U.C. officer.

The officer said to George, “that’s the worst bit of driving ever I seen.” George, who was never stuck for an answer, looked back at the roundabout then looked at the officer and said, “jez officer I thought I didn’t do too bad!” 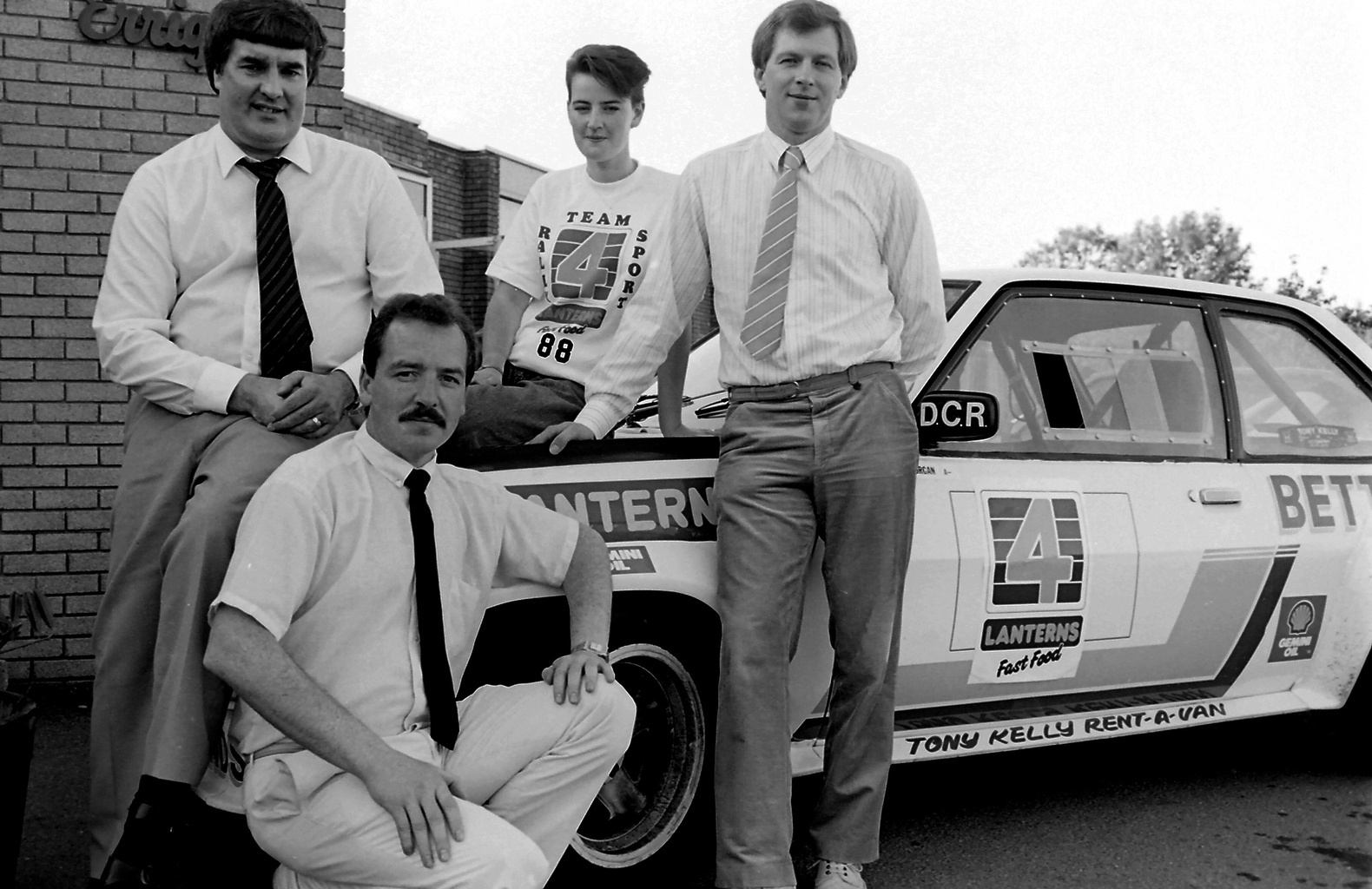 Getting ready for the 1988 Donegal International Rally. included is James Cullen who had a great battle with Mark Lovell on the event. included at the press conference were local sponsors including Tony Kelly representing Tony Kelly Cars Edel Grimes representing The Four Lanterns and Bobby McDaid representing DCR (Donegal Community Radio) Picture By Brian McDaid

Donagh Kelly
Donagh Kelly’s Ascona is now taking shape in the colours and sign writing of that great rally car of 30 years ago. Donegal Community Radio is going on to the two wing mirrors and onto the bonnet, The Milford Inn one of James Cullen’s first sponsors is there as well as Tony Kelly Cars.

Shell was the sponsor for the Donegal International Rally in 1988 and also came on board with James Cullen for his rally.

Joe Cullen
James Cullen’s brother Joe was the man, back in the day that went with James to sponsors and presented a package with the hope that sponsors would come on board as financial backers. Sitting in a sign writers workshop today I think of all the rally cars that James Cullen rallied and all the sponsors like Tony Kelly that helped him in any way in his rally career.

Donagh Kelly is a fan of James Cullen and of Vincent Bonnar, who both competed in this Opel Ascona that Donagh is recreating for this weekend. 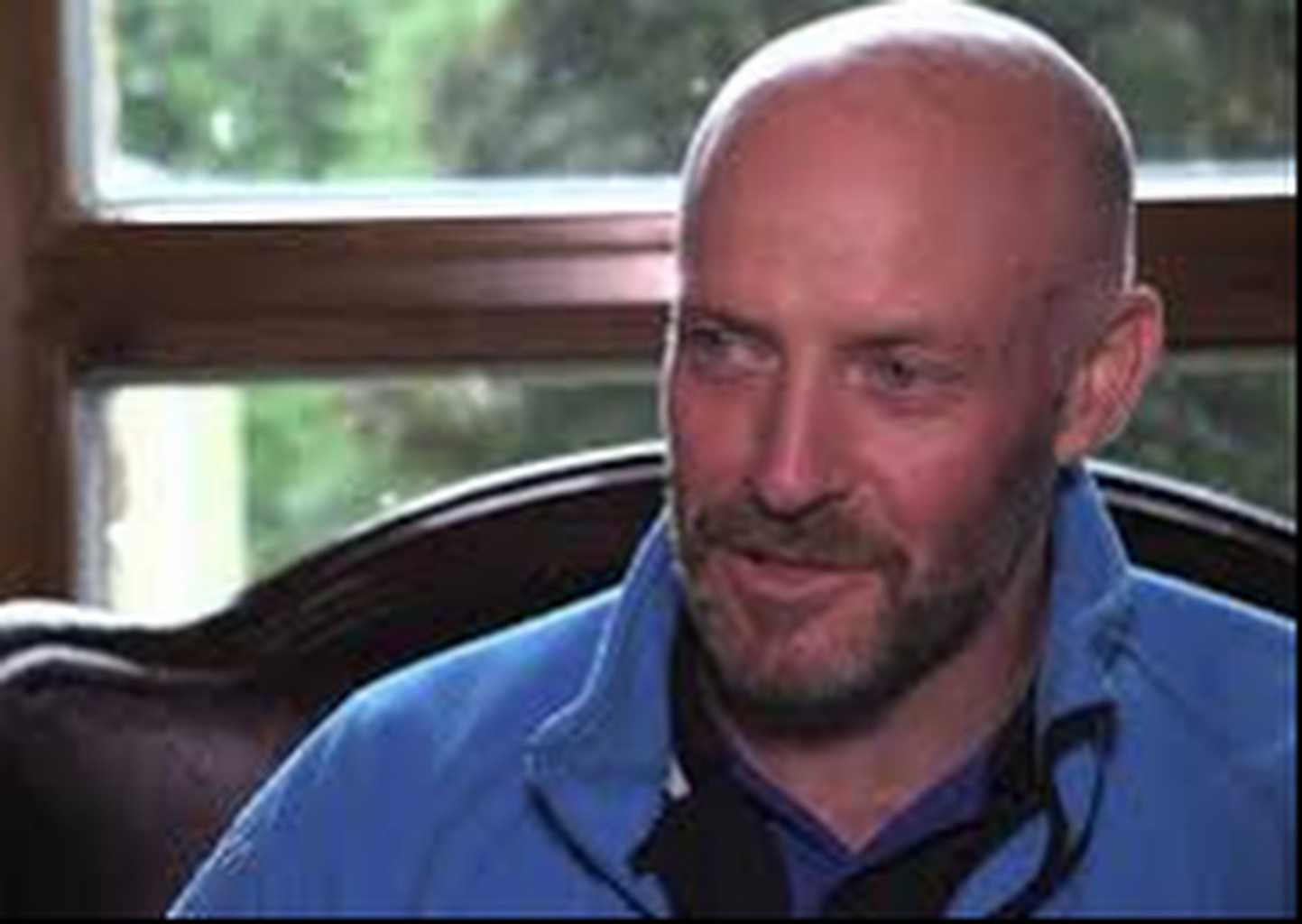 Donagh Kelly who is looking forward to the Harvest Rally this weekend as he brings one of the great rallying memories to life with a replica of James Cullen’s Opel Ascona. Photo Brian McDaid

Local drivers like these both need to be remembered for their achievements all them years ago. This weekend the hills will be alive with that unforgettable bark of an Opel Ascona 400 at full tilt as Donagh Kelly puts the car through it paces.