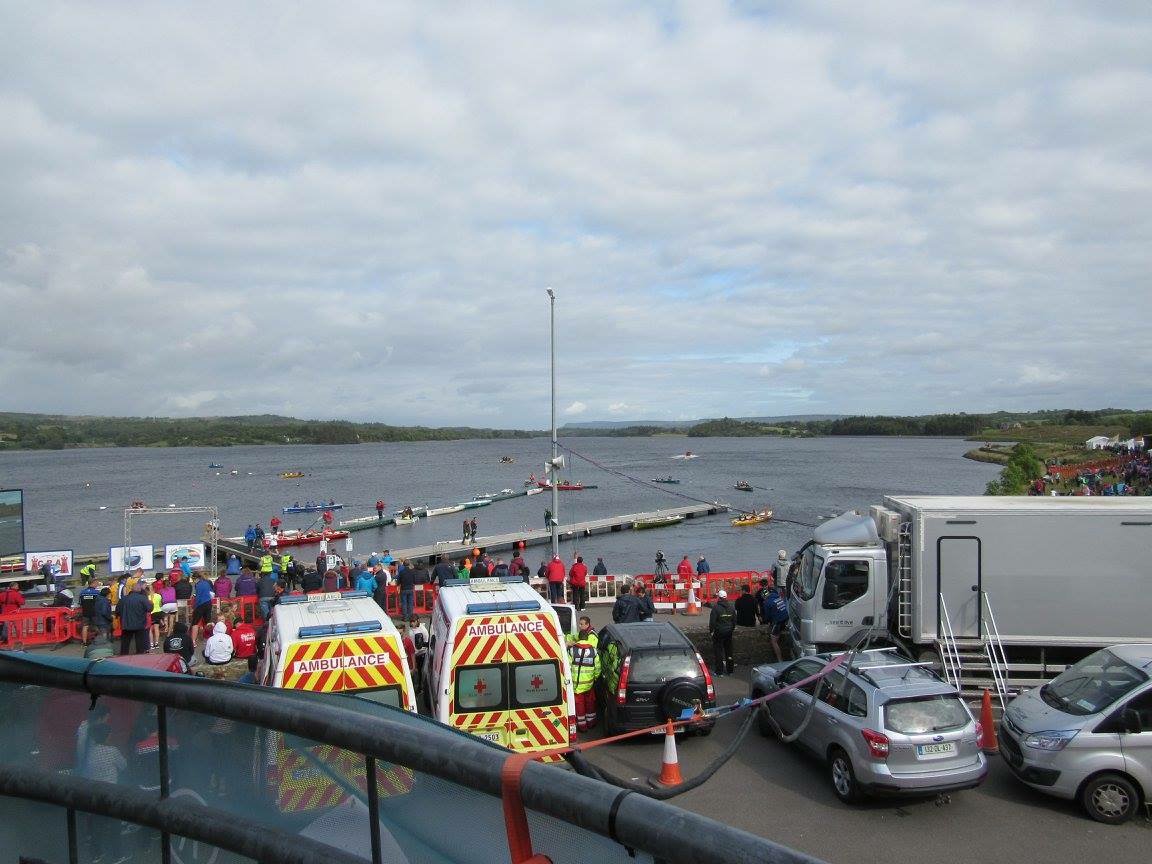 Irish Red Cross volunteers saved a man’s life when he suffered a heart attack at the National Rowing Championships in Ballyshannon.

The Donegal Area of the Irish Red Cross successfully intervened in a cardiac arrest at the National Coastal Rowing Championships in Ballyshannon on 19 August. The Veteran Men’s Heat had just begun when a team supporter came to the ambulance and alerted volunteers to a situation in a team boat; she thought something had gone “horribly wrong”. It transpired one of the competitors had collapsed in his boat and had gone into cardiac arrest.

The IRC volunteers had been booked to provide Event First Aid cover at the event and there were two ambulances on duty and four crew members – Patrick McGonagle (EMT), Ciaran Gibson (EFR), Sarah Meagher (EFR) and Feargal Taitt (EMT).

Feargal and Ciaran accompanied Donegal Bay Rowing Club personnel in a safety boat out to the scene of the heart attack. When approaching the team boat, the crew became aware the patient was unconscious. The patient’s teammates were shouting that he was turning blue. As soon as Feargal and Ciaran set their eyes on the patient they instructed the patient’s teammates to commence chest compressions and guided them through the procedure.

As this was unfolding, back on shore Sarah and Patrick had been preparing the ambulance and had it as close to the scene as possible by the time the patient made it back to the pontoon.

The patient was quickly removed from the boat onto the deck and Feargal and Ciaran sprung into action by continuing CPR while also attaching a defibrillator. One shock was delivered from the defibrillator and CPR was recommenced. Ciaran provided the chest compressions while Feargal, with the help of one of the safety boat members, administered oxygen via the bag valve mask.

The whole event was being watched by over 2,000 people but the added stress of such a large crowd watching did not deter the Red Cross crew who were supported on the pontoon by an off-duty advanced paramedic, event doctor and a number of bystanders. Within a few minutes the patient was reassessed and was noted to have a pulse and laboured breathing.

The National Ambulance Service arrived on the pontoon just as the patient had a return of spontaneous circulation and the Red Cross crew handed over care to the advanced paramedic.

The patient was transferred by the National Ambulance Service while Patrick McGonagle travelled with him at the request of the AP in case the patient should deteriorate again en route.

The crew left behind continued to gather information on the patient from teammates including date of birth, past medical history and current medications. This was then relayed on to Patrick (en route to hospital) so that a full and comprehensive history could be given to the receiving ED team at Sligo University Hospital.

The Red Cross crew then went back to providing another five hours of duty cover for the remainder of the event that day.

In terms of the outcome for the patient, he was sitting up talking the next day and looking to get back to watch the rest of the rowing championships.

Frankie O’Donnell is a Paramedic Supervisor in Donegal Town Ambulance Station and was very complimentary about the work of the Red Cross volunteers; “the professionalism and skill levels demonstrated were exemplary. The quality of the CPR was excellent and their overall contribution played a huge role in a very successful outcome for the patient.”

Seamus Maguire, Chairperson of Donegal Rowing Club said: “Without their prompt action and professionalism, the patient’s outcome may have been a very different one, today that patient is alive and well thanks to their swift intervention.”

The Irish Red Cross crew members were a key link in the chain of survival in this situation and are being recognised for their achievement with all four being awarded the Irish Red Cross Medal of Merit for meritorious service at an incident.

This award will be bestowed at a presentation evening in An Grianán Hotel in Burt, Co Donegal on 27 October.

Chief Whip and Minister of State at the Department of Culture with responsibility for Gaeilge, Gaeltacht and the Islands, Joe McHugh, will be in attendance on the night.

This type of presentation ceremony usually takes place in Dublin but on this occasion, it is being brought to Donegal as an act of solidarity with the victims of the recent flooding.

Congratulations to all involved.