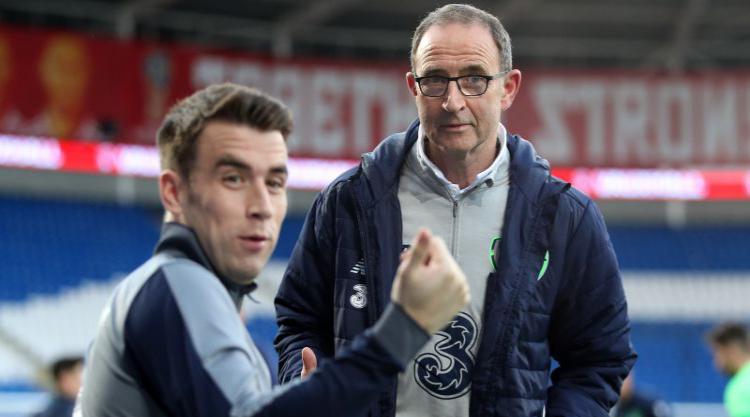 Republic of Ireland manager Martin O’Neill has urged his players to hand Seamus Coleman a World Cup spot to look forward to as the Killybegs man gets closer to a return.

Ireland face Wales tonight in Cardiff knowing that a win will seal a place in the play-offs next month.

There had been all sorts of permutations in the last week but, following Scotland’s 2-2 draw in Slovenia yesterday evening, Ireland now know that a win in Wales means they’re guaranteed a play-off berth.

Irish boss O’Neill insists that Coleman – who is with the Irish squad despite being injured – will be to the front of the players’ thoughts.

Coleman hasn’t played since suffering a horror double leg break in the 0-0 draw with Wales at the Aviva Stadium in March and O’Neill downplayed any notion that the game offered a chance for ‘revenge’.

“I don’t know about revenge, but certainly I think the view among the players is that if Russia was available to us and we could make it there, I would think Seamus would be very much at the forefronts of our minds,” O’Neill said.

“He has obviously been a class player, a world-class player and he’s been essential for us. We have missed him and it would be nice to go there.

“He is making a good recovery now, but I think that when he’s ready, he will get back to the form he showed both for club and country, and it would be nice if by the time he is back that he has got something to cheer on the international level.”