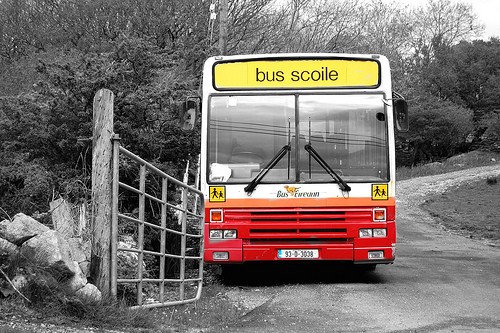 School children across Donegal could be without school transport on Monday after Bus Eireann warned it will pull services if Hurricane Ophelia arrives.

The bus provider has contacted parents saying that if Met Eireann increases its weather warning to Code Red their buses will not operate.

The system was first introduced last year and this could be the first time it comes into operation.

Thousands of parents were sent emails last night giving them a pre-warning in the event that the weather deteriorates over the weekend.

The statement from Bus Eireann warns “As a precaution against severe weather and in the interest of child safety, Bus Eireann introduced a policy applicable to all school transport services that it provides under the Transport of Education and Skills School Transport Scheme – for all Met Eireann Status Red weather events.

“This means that when a Red alert is issued by Met Eireann for the area in which you live – or to an area which your child/ren are traveling to on a school bus – the services will not operate.

“A status Red weather warning automatically means all school transport services provided by Bus Eireann under the School Transport Schemes are cancelled – in the affected areas – while the warning is in effect.”

If the operator decides to pull the services, then thousands of children will be left without transport to and from school.

Many other private operators also ferry children to school each day but a late cancellation by Bus Eireann means that it will be too late to replace bus services.

The mass cancellation could plunge parents into chaos with no back-up transport plan.

However, Bus Eireann warns that if they do pull their services on Monday, it is up to the individual schools to decide if the school should close or not.

“Guidance on school closure – provided by the Department of Education and Skills and contained in the Government’s Winter Ready publication – includes specific guidance where there is a Status Red alert relating to strong winds and storm conditions,” adds the statement.

Food bank re-established for those in need...

Confirmed: Buncrana to get permanent ambulance base