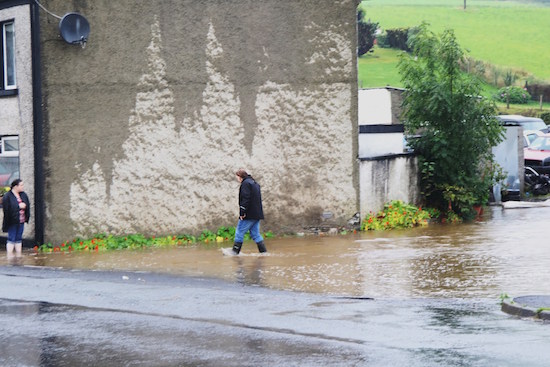 “If Inishowen is flooded again, we’ll be more prepared”

In light of this afternoon’s rainfall warning from Met Éireann, people in Inishowen have highlighted their concern over the region’s ability to deal with tomorrow’s downpour.

A status orange wind warning and a status orange rainfall warning has been issued for Donegal, with gusts between 110 and 130km/h to batter the county tomorrow.

“Inishowen was devastated by flooding in August, and people now are understandably concerned that the same will happen again,” Cllr Jack Murray told Donegal Daily.

“I’d be hopeful that if something similar does occur, the lessons learnt from the last incident will be taken on board and we will be able to deal with the problem.

“At the time of the August floods County Council staff acted fantastically and where possible tried to prevent the flood. They reacted terrifically and went above and beyond the call of duty.

“I’d hope that should something similar happen again, we’d be more prepared.

“We have a code orange here, but I’d still urge people to take the necessary precautions.

“We saw how bad they can be, and we should take every measure possible to prevent any damage.”

Met Eireann warns that upwards for 40 mm of rain will fall in the county tomorrow, and could cause some localised flooding.

During the flash flooding in August however, 77.2 mm of rain fell – over one third of the station’s monthly total.

Cllr Murray says that although most of the damage from the August floods have been dealt with, the massive clean up and restoration process is ongoing.

“Most issues have been addressed, but there has been significant gaps that have appeared since. Grants to sport clubs are nowhere near what is needed, and some have received no grants at all.

“Swan park, a much-loved local amenity, will cost around €1 million to bring back. This money is still forthcoming.

“Despite these gaps there has been nothing from the Department to address this. Those gaps are still there and there is frustration in the local community because of that.”

Cllr Murray adds that most of the families who were displaced during the floods continue to reside in temporary accommodation.

On the peninsula, most of the roads affected by the floods are now open, however none of the bridges are permanently restored, with temporary bridges being relied upon.

Sandbags are available in the area if they are needed and can be sourced through Donegal County Council.

People are being asked to check in on older members of their communities ahead of tomorrow’s storm, and the Irish Coast Guard are asking people to exercise “extreme caution” as severe winds and stormy conditions will strike all coasts.