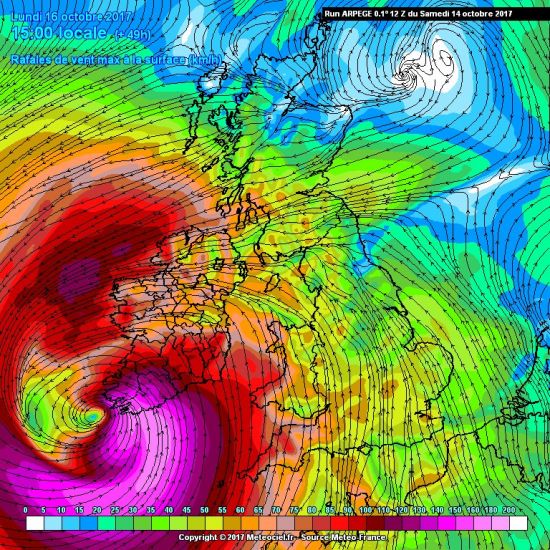 Ireland braces for Hurricane Ophelia, most severe cyclone in 50 years

Ireland is beginning to brace itself for Hurricane Ophelia, the worst storm to hit our shores since Hurricane Debbie in 1961.

Met Eireann has warned that this is the strongest hurricane to form in the Atlantic Ocean since records began.

Met Eireann told the Irish Independent that Ophelia can be compared to Hurricane Debbie, which struck Ireland 66 years ago, killing fifteen people and causing severe destruction

Minister for Foreign Affairs Simon Coveney says: “Anybody not taking storm Ophelia seriously should think again – I don’t remember ever seeing a forecast for the south coast quite like this.”

The National Emergency Co-ordination Group will meet today to discuss preparations to cope with Hurricane Ophelia. Officials from a number of Government departments as well as emergency services and the Defence Forces will meet to discuss co-ordination for the event.

Met Eireann has issued their most severe weather warning ahead of Hurricane Ophelia’s arrival, in which people are advised to “take action to protect themselves and/or their property”.

The warning is in place for counties Galway, Mayo, Clare, Cork and Kerry from 9am on Monday until 3am on Tuesday.

In a statement, Met Eireann says: “Hurricane Ophelia is expected to be near the southwest tip of Ireland by Monday morning.

“From there it looks set to track northwards close to the Atlantic Seaboard at a fast pace to be roughly situated 100-200km northwest of County Donegal by midnight on Monday.

“Met Éireann forecasters have been monitoring this situation closely all week. We have been liaising with our international colleagues, especially at the UK Met Office, and as we are now in the 48 hour window, with access to our high resolution models, we have decided to issue specific warnings.

“The warnings will be updated as required.”