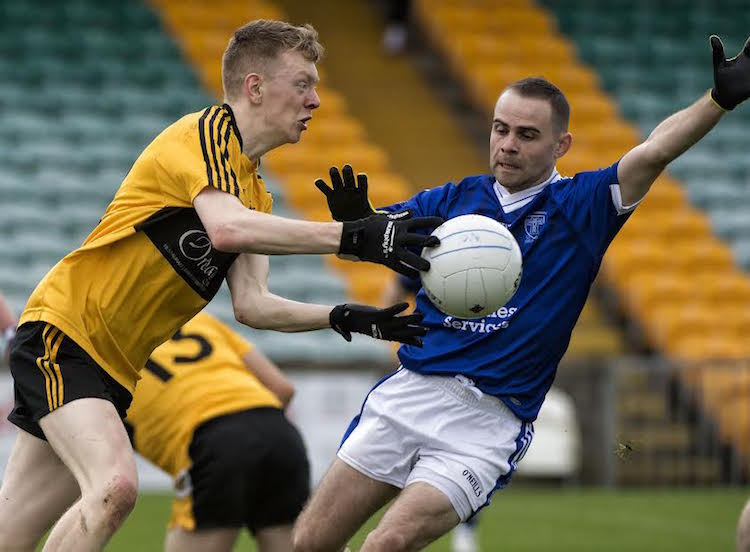 Naomh Conaill came from seven points down against St Eunan’s to win their first-ever Donegal Senior B Championship title.

They looked down and out when St Eunan’s went seven up in the early moments of the second half, but a stunning comeback was completed as they outscored their opponents 1-8 to 1-3 in part two.

Naomh Conaill led for the first time when Paul McGuinness curled over 11 minutes from the end.

St Eunan’s were five to the good when Oisin Carr netted their second goal early in the second half.

It looked ominous for the men in blue and white, but Naomh Conaill hit 1-5 on the spin, including a goal by Shane McDevitt, to move into the driving seat.

During the Naomh Conaill purple patch, Tony Byrne – who went into nets having played the first half at midfield – made a brilliant save to thwart Sean Halvey and keep Eunan’s at bay.

A neat move, involving David O’Herlihy and Martin, was polished off by sub Aaron Deeney to make it a one-point game heading for the last four minutes.

Naomh Conaill introduced their captain, Joe Kennedy, for the last few minutes and he punched over after a Daragh Gallagher free was touched onto the crossbar, before landing a second point with only his second touch of the leather to seal the win.

Five years ago, Gallagher was Man of the Match in a SFC final Naomh Conaill lost to St Eunan’s.

That afternoon, it was Mick Martin who captained the black and amber to the Dr Maguire.

Here, the two lined out on opposite sides and after Gallagher, from a 20-metre free that would usually be his bread and butter, shot off the upright, Martin put Eunan’s ahead, his shot going over off the fingertips of James Boyle.

Martin was the Eunan’s full-back in that 2012 final. He was stationed on the edge of the square here again, but this time with the number 14 on his back.

With three minutes to go in the first half, Sharkey’s dropping ball hung for Martin to rise and bat home for a goal that helped put the Letterkenny men into a three-point interval lead.

Until Martin’s goal, play had see-sawed with the sides level three times.

Whelan had Eunan’s in front again when he popped over after Boyle clawed away from a palmed effort by the stretching Eddie Blake, fed by a cross-goal pass by corner-back John Foley.

Gallagher, from a free on the stand side around 35 metres from goal, dropped short into Conor Harley’s hands and St Eunan’s went two ahead through Daniel Gillespie and Whelan with Martin’s goal giving them breathing space at the short whistle.

Former Donegal senior panellist Gallagher got married earlier this year and is now living in Grange, County Sligo, but has been togging out for the Naomh Conaill second string, with fellow former Dr Maguire winners Cathal Ellis, Stephen Molloy and Seamus Ellis also in tow for Seamus O’Malley’s men.

Gallagher pointed a free just before the break to cut the deficit, Eunan’s 1-5 to 0-5 ahead at the break.

Just four minutes into the second half, St Eunan’s looked to be on their way when Carr rolled into the bottom corner after taking a pass in a tight area from Kevin Kealy.

Carr managed to find the space to tuck beyond Byrne.

The Naomh Conaill response was instant as McDevitt blasted past Harley at the other end and the Glenties flag-bearers were within a point when Gallagher landed a wonder point from wide on the right in the 43rd minute.

It was just the tonic and spurred them to an historic win.