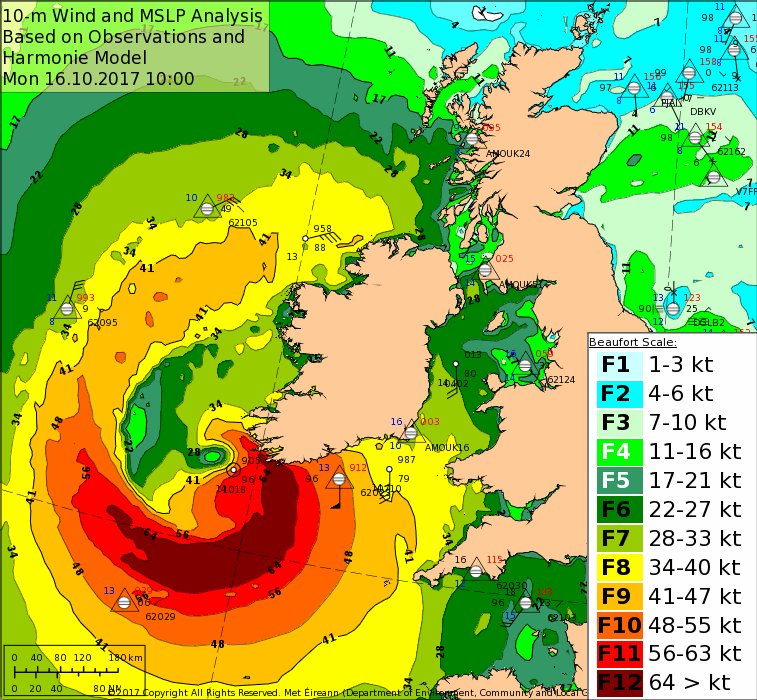 Irish meteorologist Gerry Murphy has said the north west of Ireland is not expected to face the worst of the severe weather of Hurricane Ophelia.

Ex-Hurricane Ophelia is forecast to track up over western parts of Ireland during daytime today bringing violent and destructive gusts. People are advised to stay indoors, avoid travel and take necessary precautions. There will be heavy rain, local flooding and a potential risk to life. The latest forecast shows the storm moving over Donegal in the late afternoon.

Mr Murphy of Met Eireann spoke on RTE Radio One to say the morning and early afternoon are the key times for the south of the country, where gusts have reached 150 km/hr.

The storm will move upwards through the afternoon, he said, and while every county is at risk, the southern areas, Clare coast and Galway Bay are expected to get the strongest westerly winds.

“The north west is not expected to bear the brunt of as strong winds as further south,” Mr Murphy said.

Very strong southerly winds are expected across the midlands this afternoon.

“Given the fact that the midlands are not be used to winds of that strength, there is the potential to cause damage,” he said.

Giving a projection of how long the storm will last, he said the winds are expected to ease quickly once the storm has moved up past the north west.

“Each area will experience very strong winds for three hours,” he said.

North west not expected to bear the brunt of Storm Ophelia – forecasters was last modified: October 16th, 2017 by Rachel McLaughlin