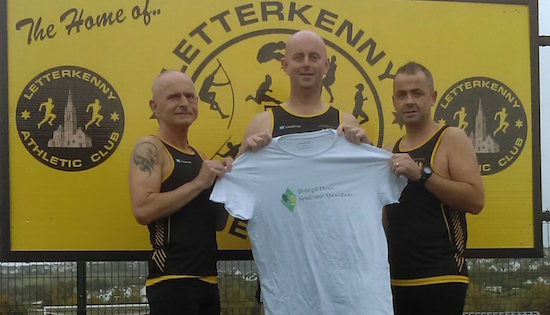 Three Letterkenny Athletic Club members will run this year’s Dublin City Marathon in aid of the Donegal Down Syndrome Association.

Barry Mackey, Paul McMonagle and Gerard Mullen, are tapering their training following months of preparation for the event which takes place on Sunday, October 29th.

Paul ran the Dublin Marathon for Meningitis Ireland in 2010. His close friend, Donal McBride, died suddenly from meningitis the previous year and Paul undertook to run the 26.2 mile distance in Donal’s memory.

Paul explained the background to his latest fundraising venture.

“We were out for one of our long runs earlier in the summer and I suggested we should try to raise a few euro for a local charity and decided on the Donegal Down Syndrome Association. They are a great organisation who do trojan work and we are glad to be helping their cause in a small way,” he commented.

His club mates, Gerard and Barry, were only too delighted to row in behind him and agreed to help raise funds for the local group.

“I think it’s nice to have a charity to run for and promote when doing the marathon,” said Gerard, who completed the Belfast Marathon in 2006.

“We’ve had a good response to date. People have been extremely generous and we are grateful to all who have contributed,” he added.

Those sentiments were echoed by Barry.

“When asked by my club mates to help raise money towards such a worthy charity as Down Syndrome in conjunction with the Dublin City Marathon, I was more than delighted to do so.

“It’s nice to know while competing in such a great event that other people will be benefiting too. I would like to thank all the people who supported me and my club mates for what is such a worthy cause,” commented Barry, whose first marathon was in Dublin last year.

The trio have trained long and hard for Sunday week and all going well, the three are hoping to return with personal best times. All three LAC men had solid runs in the Danny McDaid 15K in July. Gerard and Paul had strong performances in the Donegal Half Marathon in August, while Barry posted a personal best of 90 minutes in the Paris Half Marathon in September. All three will be accepting donations until next weekend.

The Donegal Down Syndrome Association offers a range of activities, including swimming, yoga, drama, music classes and art classes. September 2018 will see the start of an intense literary programme for the young adults.

The Donegal Down Syndrome Association provides funds for members to have private speech and language classes if the service they are receiving is not adequate. It also aims to provide any service or activity that can help its members live a full and enjoyable life.

Letterkenny lads hoping to get over the ‘wall’ for a great cause was last modified: October 19th, 2017 by Stephen Maguire
Facebook0Tweet0LinkedIn0Print0
Tags:
donegalLetterkenny ACMarathon