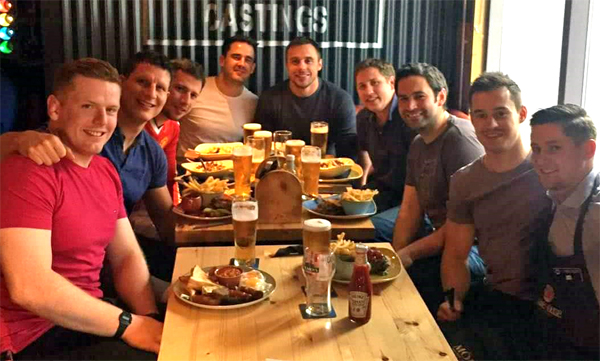 Warehouse Bar + Kitchen in Letterkenny had some very familiar faces in on Saturday, 14th October.

Rugby International Tommy Bowe and a few of his Ulster teammates popped into the venue for lunch and decided to stay the night. There was much excitement among locals as they partied alongside the top sports stars.

The award-winning Warehouse team were delighted to welcome the special guests:

“Bowe was guest chef in “The Restaurant” a few years ago, so we were honoured to have him spend the day and sample some of our dishes with his team mates,” a spokesperson said.

Bowe, originally from Monaghan now lives in Belfast with his wife Lucy and daughter Emma. Since returning to the pitch after his ankle injury, Bowe is working on his clothing and shoe line as well as a Sports For Schools project with Subway.

Warehouse quickly become a top destination for fans once this photo went online!