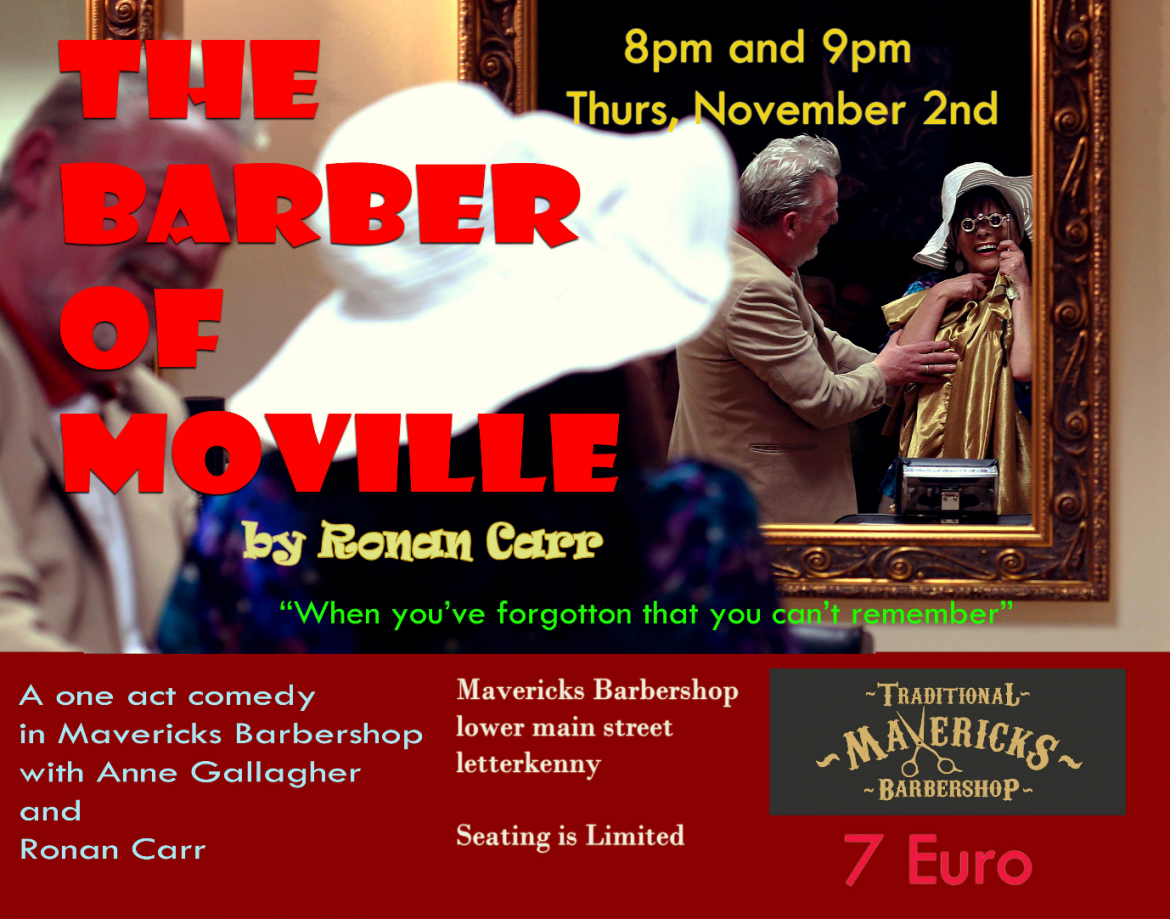 Mavericks would like to announce that we will proudly be the venue for a local theatrical play “The Barber Of Moville” by Ronan Carr.

Being a site-specific play, it will take place in our shop Mavericks Traditional Barbershop.

The play is about two barbers, a husband and wife, Dominick and Molly, who are preparing to close up their shop to go on one final trip to see the opera. Molly is suffering from severe memory loss and is struggling to remember why she wants to take this trip.

The play has been preformed in various locations including Dublin and Derry. People’s reactions to the play have been amazing and encouraged the group to take the piece to a wider audience. The play is a comedy, with many funny moments, but it is also a poignant portrayal of a marriage that is ending through no fault of the couple involved.

The play stars Anne Gallagher and Ronan Carr. Anne has recently appeared in the warmly received “Waving Not Drowning, the Mental Health Road Show”. She has a wealth of stage experience in Dublin and the northwest.

Ronan is an experienced stage and screen actor. He has written and acted in radio plays for RTE, most recently “To Sean with Love” with Owen Roe and Ali White.

Although the word dementia isn’t mentioned in the play, and we are not attempting a realistic portrayal of the disease, that theme seems to really resonate with audiences and the play has certainly encouraged post-show discussions about the illness.

In Mavericks we feel strongly about all aspects of mental health and illness and feel proud to be part of something that not only is creating awareness but has the ambition of aiding local dementia charities to raise money through ticket sales.

Mavericks is only providing the location for this wonderful event but we strongly recommend anyone to come and enjoy this fantastic play is a unique setting!

The Barber of Moville will take place on November 2nd
Two performances at 8 and 9 pm.
Show lasts approx. 55 mins.
Seating is limited and is on a first come first served basis.