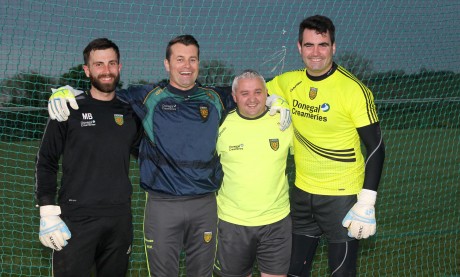 written by Staff Writer October 21, 2017
Facebook0Tweet0LinkedIn0Print0
The Donegal GAA community is in mourning with the sad news that Pat Shovelin has passed.
Donegal County Committee would like to express our sympathy to Pat’s family, friends, work colleagues and CLG Ard an Ratha.
The CLG Ard an Ratha clubman (41) had bravely battled against a rare but aggressive form of cancer for the past year.
Pat was one of Gaelic games’ most popular figures in the North West – ever since he first came to wider prominence under Jim McGuinness’ successful tenure with Donegal seniors and U21s where he played a significant part in their provincial and, of course, All-Ireland success.
Pat’s ability as a goalkeeping coach was obvious. But his personality and kindness eclipsed all of that. He was special. He was a genuine soul that will never be forgotten. His ability to remain positive and productive right up until the last number of weeks is an example to us all.
Even towards the end of last season, when illness began to take a real grip, Pat remained part of the U21 set-up under Declan Bonner as the side delivered Ulster success. Captain Eoghan Ban Gallagher made sure that Pat was up alongside him as he claimed the provincial prize. It was a beautiful gesture.
But it was a powerful one too. Pat had battled bravely to make sure he was present that night and Ban and his teammates were never going to deny him the opportunity to bask in the taste of success once again that glorious evening in Armagh.
What the win also did – and Pat was quick to point this one out – was make him, in his own words “Donegal’s most successful ever football coach”! He now had a fourth Ulster crown to go along with the previous three senior ones he’d won under McGuinness! And as a result, his collection now eclipsed even that of the great Glenties man! 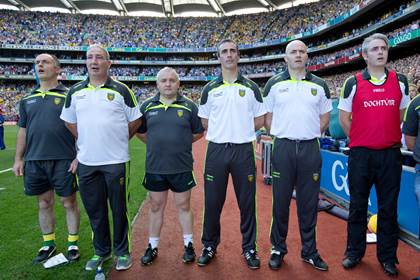 It was a brilliantly witty quip. And it was another example of Pat’s ability to make light of his illness. Indeed, when the candidates to replace Rory Gallagher were recently announced Pat jokingly wondered why he, with such a record, wasn’t on the shortlist!
What is for certain however, is that Declan Bonner would have had Pat back on board in 2018 as he looks to take Donegal football back to the top of the mountain.
Asked to share a few thoughts and words this evening by Donegal GAA, Eoghan Ban Gallagher said this. “It’s absolutely devastating. We’re all heartbroken. Pat was such a great person. We’d such a great evening after that U21 final win. It meant so much to us all. I’d like to offer all the lads’ (U21’s) condolences to his wife Chrissie and their two children Ethan, Tom and Pat’s wider family and friends.
***
Donegal CCC have postponed both Ardara games which were scheduled to take place on tomorrow (Sunday) and request all Club’s to hold a minutes silence at tomorrows game.
Donegal GAA pay tribute to the late Pat Shovelin – one of life’s real gentlemen was last modified: October 21st, 2017 by Staff Writer
Facebook0Tweet0LinkedIn0Print0
Tags:
donegalPat Shovelin