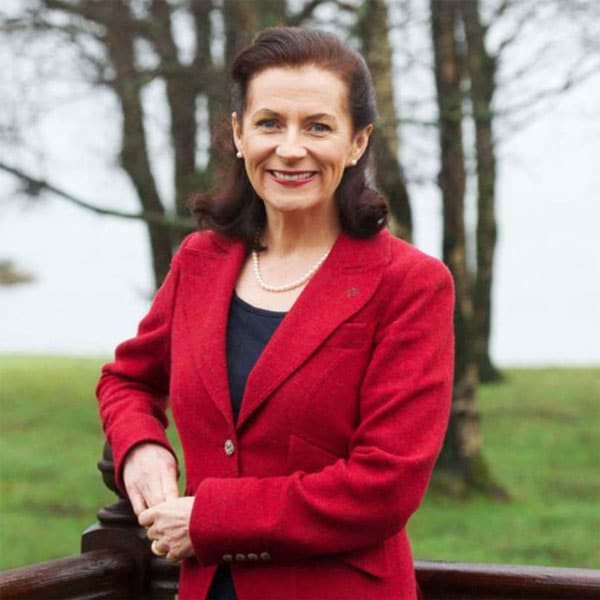 Ballintra woman Deirdre has been nominated for the IMAGE Businesswoman of the Year Awards 2017 in the Entrepreneur category.

The co-owner of the multi-award-winning Harvey’s Point Hotel, Deirdre has seen the retreat transform from a 20-bedroom hotel to the lavish, enchanting destination it has become today.

“My role has evolved over a period of 28 years, from being an employee working as a receptionist, to duty management to general management. During this time, the business has grown substantially from a 20-bedroom hotel with a forty-seat restaurant to a 75-bedroom hotel with three busy food outlets and a conference centre,” Deirdre told Donegal Woman.

“I genuinely love working with people and it gives me great pleasure to share my passion for the hospitality industry with others. Together we [the staff] have created a unique culture of caring for each other as a team and caring for our customers.

“I am overjoyed and overwhelmed, firstly to be nominated and most importantly, by the amazing good wishes from people throughout Ireland. The nomination greatly assists me in my work to make the voice of women heard in rural Ireland and of course it’s such a great opportunity for me to promote our beloved Donegal.”

Known for her high energy levels, sunny disposition, and positivity, Deirdre’s leadership skills are second to none due to her ability to empower her team and lead by example.

Seen as a role model by her colleagues, Deirdre says she gets a great sense of pride and satisfaction to play her part in encouraging the next generation of business leaders.

She has taken this beyond the grounds of Harvey’s Point Hotel, being elected the President of Donegal Women in Business Network, a member of ‘Going for Growth’, and volunteer Lead Entrepreneur in the pilot programme ‘ACORNS’ which is an initiative to support aspiring female entrepreneurs in rural locations throughout the country.

“I believe in the power of sharing knowledge, specifically whereby women can help other women to reach their goals and live their dreams. Being elected President of the Donegal Women in Business Network earlier this year is a wonderful opportunity for me to play my part in making the voice of women in business heard in our community and our country.”

A big fan of Irish clothing brands such as Magee of Donegal, Marion Murphy Cooney, and Heidi Higgins, Deirdre also inspires in the fashion department with her smart, tailored business attire!

Due to her remarkable work ethic, Deirdre has accumulated an impressive list of prestigious titles.

In 2009, she was awarded Fellowship of the Irish Hospitality Insititute and was given the title Hotel Manager of the Year in 2010. In 2015, she was selected as a member of the National Tourism Leadership group before being appointed as a Lead Volunteer in the ACORNS Programme.

Last year she was delighted to be crowned Donegal Person of the Year, and earlier this year took the reigns as President of the Donegal Women in Business Network.

Just last month, champagne was popped at Harvey’s Point following the upgrade of its AA rating from four black stars to a coveted four red stars, making it the only hotel in the North West to receive this highly respected industry accolade, another feather in Harvey’s Point’s already exquisitely decorated cap.

It has not all been smooth sailing at the idyllic Lough Eske hotel, however. During the credit crunch, Donegal businesses were struck by the fall in tourism. By demonstrating unwavering determination and strategizing effectively, Harvey’s Point Hotel weathered the hardships of the recession.

“As a family run business, the recession years were challenging in terms of maintaining investment in the property, with limited cash flow and no access to funding. There were also difficulties competing with NAMA hotels that were heavily discounting, while not having the same pressure that we had to service our debts and stay afloat on our own merit.

“Our strategy during the recession was to remain focused on high standards of hotel keeping and hospitality, to look for new ways to delight our discerning guests, to offer added value instead of dropping rates to an unsustainable level, to maintain control over costs and most importantly to innovate in terms of new products such as the recently opened Lodge @ Harvey’s Point and the Garden Suite Conference Centre.

“Location was once a challenge due to our being off the beaten track and the perception that Donegal was so far away from Dublin. However, this has since become an opportunity, as we market brand Harvey’s Point as a relaxing, luxury getaway resort.”

Following this, she has thrown herself into providing top-quality customer care and focusing on making Harvey’s Point Hotel Ireland’s number one retreat.

“In recent years, I have been concentrating on sales and marketing with responsibility for leading the overall strategic direction of the company.

“At every opportunity, I enjoy being on the shop floor welcoming guests, while overseeing that standards are being met and customer expectations are being exceeded. It is my objective to ensure that all our activities are aligned with our Vision, which is to be recognized as one of the leading hotels in Ireland, delivering world-class hotel-keeping, blended with authentic Irish hospitality.

So what are the plans for the future? She hopes to continue to promote Donegal as a destination for leisure and business tourism in collaboration with Tourism Ireland, Failte Ireland and Donegal Tourism. Continuing to build on the Harvey’s Point brand is at the heart of these plans, as well as going for top industry awards.

On a personal note, Deirdre’s plans for the next twelve months include speaking at public events and striving towards hitting the perfect balance of work and home life.

Deirdre hopes that by sharing her business story, particularly with women from rural areas, she could empower other women to strive for success – whether it’s a business idea at the kitchen table or in the boardroom.