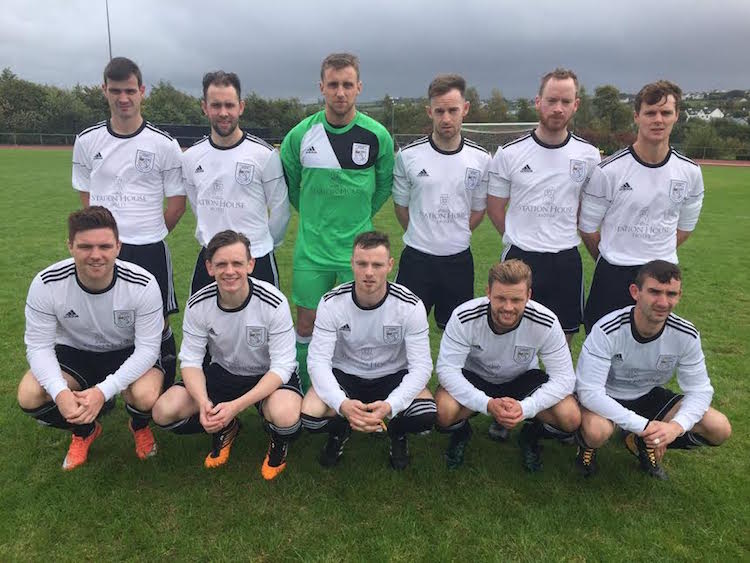 A competent assured performance from Letterkenny Rovers saw them overcome Bonagee 4-0 in the FAI intermediate Cup derby clash and the win for Eamon McConigley’s men ensure they return to the National stages of the competition.

Perfect conditions greeted both sides and it was Rovers who started the brighter on a sultry Sunday afternoon for football on a lush Aura surface.

The opening stages were tentative from both sides as the game failed to settle as befits derby encounters and it was Rovers who had the first chance of note on 19 minutes when the highly impressive Ryan Lonergan and David Shovlin combined to set up Pajo Rafferty but his tame shot was well gathered by Gareth Wade in the Bonagee goal.

Christy Connaghan also shot high over the bar and Lee Toland came close with a free kick in the opening skirmishes before Bonagee almost opened the scoring on 25 minutes only for Chris Moran to see his header from a long Michael Funston throw just go the wrong side of the post.

That gave Tony O’Carrolls men added belief and James Carolan shot just over minutes later as Bonagee threatened an opener but the crucial opening goal fell to Rovers on 30 minutes.

A long ball from Rory Kelly sent Lonergan away and  he was dragged down by Caolan McLaughlin and referee Garvan Taggart had no hesitation in pointing to the spot although Bonagee were claiming that the play should have been called back for an earlier foul on Lonergan.

Rovers then saw Lee Toland’s spotkick well saved by Gareth Wade but the very alert Sean McCarron was on hand and reacted quickest to neatly fire home the rebound.

That opener was crucial and it was Rovers who got the all important second goal just before halftime when Lonergan set up Pajo Rafferty and his persistence paid dividends when beating his markers before putting in a sublime cross which was met well by Kevin McGrath at the back post and he blasted home with his left foot giving Wade no chance.

Any hopes of a Bonagee revival were finished on 52 minutes when the move of the game involving McGrath, Lonergan and McCarron saw McCarron find Rafferty and he netted from close range to make it 3-0 and continue his streak of having scored in every game this season so far.

Rovers then made it 4-0 on 59 minutes when McCarron fired home and Rovers were in no mood to concede anything easy to give Bonagee a sniff and they closed it out well with Lonergan and Shovlin combining well down the right hand side to create a number of openings.

Bonagee never stopped playing and almost got one back as a defender almost inadvertently put the ball into his own net  while Mark Harkin, Chris Moran and Michael Funston also tried their luck from distance just firing wide but in truth Rory Kelly was rarely troubled in the home goal.

A good win for Letterkenny who have found it difficult at times to progress to the National stages although they did reach the final in the Aviva in 2016 but the big games keep coming for Rovers who are back in action next Sunday when travelling to play Derry City Reserves in league action.