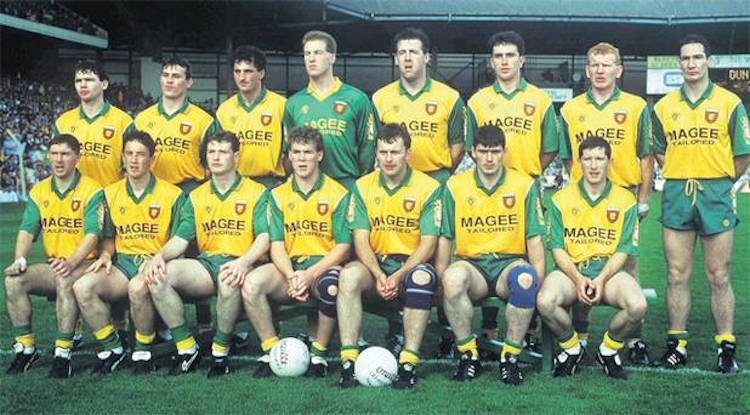 The Abbey Hotel in Donegal town was packed to its capacity on Friday night as the All-Ireland winning Donegal squad from 1992 were honoured at a gala banquet.

This year, the history makers were honoured as the jubilee team at the Ulster and All-Ireland finals.

On Friday night, around 500 people crammed in to honour the men who showed the way for Donegal.

“I am really privileged to captain the first team to ever bring Sam to the hills of Donegal,” said Anthony Molloy, 25 years from when he uttered the immortal line, ‘Sam’s for the hills’.

“For a fella like me to be afforded that privilege of walking up the steps to accept Sam was unbelievable.”

Legendary team manager Brian McEniff added: “We always had belief in that squad of players. This has been a great occasion to remember 1992 and we hope to be in London with the Donegal Association in early December.”

The incoming President of the GAA, John Moran, who admitted that he was ‘a closet Donegal fan’ and Fermanagh’s Peter Quinn, the GAA President from ’92, who presented Molloy with Sam on that fabled September Sunday, were special guests.

Pieta House, Donegal Hospice and the Inishowen Flood Relief Fund were the beneficiaries of Friday’s banquet.

Watch a package from the night, put together by Brendan O’Donnell of Jacksonsmediatv, below…