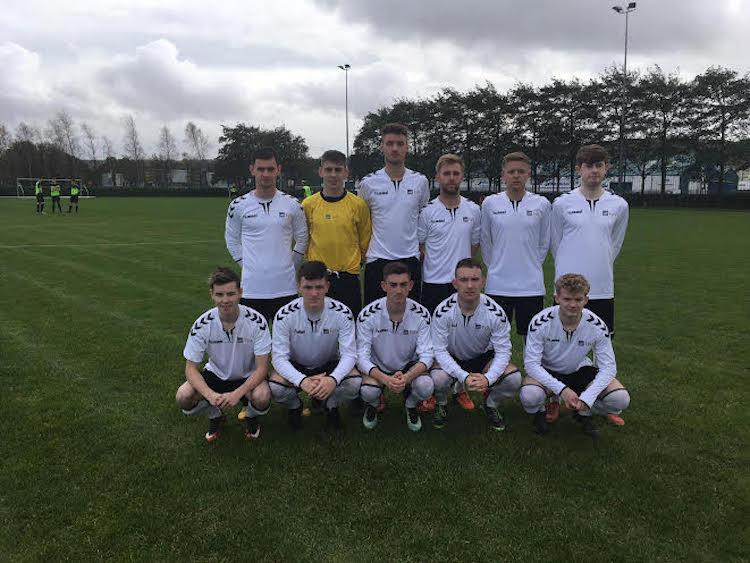 Letterkenny Institute of Technology let a lead slip at the Port Road campus today as IT Blanchardstown netted twice in the second half to defeat the Letterkenny students.

Letterkenny Institute of Technology 1 IT Blanchardstown 3

Dean Larkin’s opener on 37 minutes was swiftly cancelled out by Jamie Hollywood before strikes by Sean Bregozzy and Mikey Scott earned the Dubliners the win,

LyIT had drawn with Dundalk in their opening game and, after absorbing some early pressure, took the lead when Gareth Doherty’s magnificent free kick was headed home by Larkin.

But it was IT Blanchardstown who began to take charge of things.

Georgie Mukete was denied by LyIT ‘keeper Jason McCallion while Callum Carberry’s rebound was over the top.

McCallion saved from Holywood – who appeared as a sub for Drogheda United in their 3-2 win over Finn Harps last night – after he burst into the box and the busy home netminder had to beat away a shot from Scott.

LyIT started to come into it. Odhrán McMacken was just wide from 25 yards and Cody Brogan was inches away from connecting to Larkin’s cross.

After Larkin netted, IT Blanchardstown should have been level but Scott shot wide from a Mukete cross.

They did get the equaliser before the break, though, as Hollywood’s low drive beat McCallion.

Four minutes into the second half, Bregozzy finished after LyIT didn’t deal with a corner and they game was beyond them when Scott found the bottom corner.

Scott could have added another but bent just over the crossbar when put clear, while Mukete failed to convert a Scott cross soon after.

McCallion saved from Emmanuel Phillips and Adrian Delap tested Adam Kmet, but the home side had left themselves with too much to do.