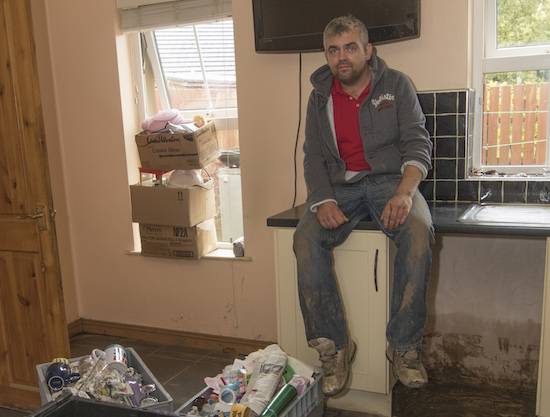 Govt gives €360,000 in flood payments to families, sports clubs and businesses so far

Government agencies have paid out more than €360,000 through its humanitarian assistance schemes since the north Donegal flood in August, Government Chief Whip Joe McHugh has confirmed.

The Donegal TD said almost €180,000 of the funding has been paid by the Department of Employment Affairs and Social Protection to families affected by the floods through emergency payments, money towards furniture and electrical goods and for home repair.

In addition initial payments from the Department of Defence Red Cross scheme to sporting and community groups and small businesses which didn’t have insurance cover now stands at €185,000.

Minister McHugh said that a third funding stream to farmers had also received more than 300 applications and these are now being processed by the Department of Agriculture.

“So far 141 households have received humanitarian payments totalling €178,000, mainly under Stage 1 of the scheme introduced after the floods on August 22 and 23,” said Donegal TD McHugh.

“Around 40 households have received funding under Stage 2 covering items like furniture with another two dozen being processed and there have been a small number of payments so far under Stage 3 covering re-wiring and works like that and that was to be expected as fixing those repairs was always going to take time.

“I have spoken with Cabinet colleague Minister Regina Doherty and she has not set a limit on the amount that can be paid to an individual household under this scheme. Levels of payment depend on the relative severity of damage experienced and the household’s ability to meet these costs ensuring that the funding is appropriately targeted.

“The scheme is demand led and there is a time-lag between the flooding event and actual claims for financial support. It is unclear at this time the total level of funding that will be required to return homes to a habitable condition. However, it is expected that the value of payments under the scheme will increase as we continue to move into Stage 2 and Stage 3 supports.”

The local TD said the Department of Defence scheme for uninsured small businesses and community groups had received 63 applications via the Red Cross.

“Two thirds of claims are for sums greater than €5,000 and so far 32 businesses and five community or sporting groups have received initial €5,000 payments totalling €185,000. My colleague Minister Paul Kehoe has told me the scheme is going well and a number of further assessments will take place in the coming days.”

Minister McHugh added: “Minister Michael Creed at the Department of Agriculture has told me that more than 300 farmers have applied for help under the scheme and they are being processed as a matter or urgency. That scheme is capped at €15,000 per farm under European Union rules.

“Finance Minister Paschal Donohue also included a multi-million euro package for infrastructural repair – mainly in Inishowen but also in other areas – during the recent Budget.”

The Donegal TD said the response from community and charity groups had also been phenomenal.

“On top of all this State aid to communities, more than €70,000 in charitable donations are also being distributed to families,” said McHugh.

“The Irish Red Cross are using that money – raised by people like singer Daniel O’Donnell – to help those in need. I want to again thank all those who did so much to help the people of Inishowen in their time of need.”