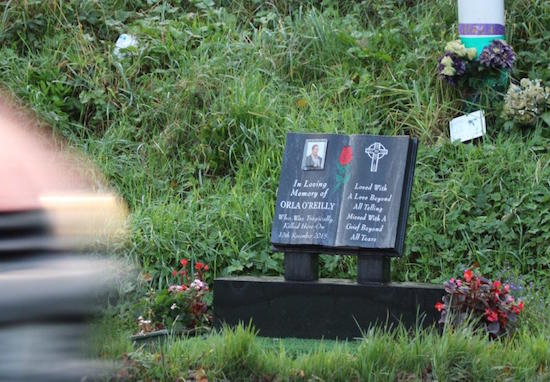 The family of Orla O’Reilly who was killed by a drink-driver says there is simply no excuse for anyone to get behind the wheel while under the influence of drink or drugs.

The 34-year-old youth worker died when a car being driven by Kevin McClintock smashed head-on into the youth worker in Co Donegal killing her instantly.

The inquests into both Mr McCintock and Ms Reilly were held today during which it was found that both died from multiple injuries suffered in a road traffic accident.

The jury also came to a finding that Orla’s death was due to misadventure.

Family solicitor Fiona Baxter said “Personal responsibility for the consequences of driving under the influence and speeding should never be excused.

“A driver who speeds or drives while under the influence of alcohol or drugs and then crashes that car into innocent people bears the responsibility for the death or injuries sustained by their victims and the devastation felt by the loved ones left behind. Speeding and drink driving are personal choices and cannot be excused.”

Orla was due to marry fiancee of two years Jimmy McKinney in October, 2016.

The couple had spoken by phone just moments before McClintock ploughed into Orla on the M13 road at Killyverry, Newtowncunningham on Friday, November 13th.

Orla’s fiancee Jimmy was flanked by Orla’s mum and dad, Helen and Brian, brother Shane and sister Maeve and other family members.

The family spokesperson said that Orla was always a careful driver.

The O’Reilly family solicitor, Fiona Baxter reading a statement on behalf of the family. Pic by Northwest Newspix.

“On Friday the 13th November 2015 our lives were shattered when Orla was killed as she travelled to work. That day as always, Orla drove with due care on the roads. Witnesses state that a black car which was out of control, going around in circles and coming sideways on the wrong side of the road, smashed into Orla’s car killing her.

“From accounts we have been given the driver should not have been behind the wheel on that day. He had got into his car in Letterkenny that day heavily influenced by drink and drove extremely dangerously until causing the death of Orla. The crash scene can only be described as horrendous.”

It added that Orla, who was originally from Cavan, was a dedicated youth worker with Donegal Youth Services in Letterkenny.

The many tributes, books of condolences and messages received following Orla’s death are testament to the love and influence Orla had on so many young people.

A spokesperson for Donegal Youth Services said “Orla was an inspiration to us all and through her work she helped and inspired so many young people.”

Orla and her fiancé Jimmy were happily planning their wedding day which was to be the 7th of October 2016.

Thes spokesperson added “No words can ever describe the grief and devastation we feel at the loss of our beloved Orla at such a young age when she, fiancé Jimmy and all her family had so much to look forward to. Orla had so much to do and so much more to give.

“On the day of the crash Orla, who herself was a strong promoter of road safety, became another victim/ statistic of the deadly carnage on our roads caused by speeding and drunk driving.

“Orla was a strong promoter of road safety. We, as her loved ones, make a plea to all to take care on our roads and remember the devastation left behind when a car is used in this manner.”

Orla’s family said they would like to thank the coroner Dr. Mc Cauley, the jury, the witnesses who gave evidence here today and assistance in the immediate aftermath of the accident.

“Finally we pay tribute to the emergency services and the Gardai who attended at the scene and thereafter carried out a thorough investigation.”

Orla’s heartbroken family say there is no excuse to get behind the wheel drunk was last modified: October 26th, 2017 by Stephen Maguire