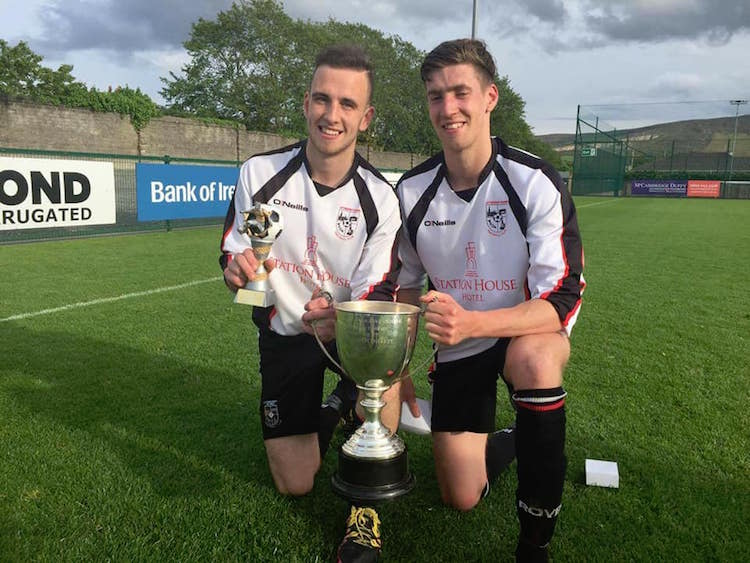 Brian McVeigh says the lessons of last season are firmly in Letterkenny Rovers’ minds as they seek to continue their good start to the season.

Rovers are away to the early Four Lanterns Ulster Senior League leaders, Derry City Reserves, on Sunday, with the Leckview men three points behind the Candystripes.

Letterkenny have played just one league game so far – they were awarded three points after Finn Harps Reserves were unable to field – and while it has been a stop-start campaign thus far, the Cathedral Towners have already booked a spot in the Donegal News USL League Cup semi-finals and have advanced to the national phase of the Intermediate Cup.

“We had a few weeks there with no game, but Eamon doesn’t let us slack off,” McVeigh says.

“So far, so good, but we can’t get complacent. We just have to work hard. We know it’s early days, but we don’t want to end the season with nothing.”

It could be seen as an odd statement at this juncture of the season, but it is at precisely this point last season when Rovers suffered a sequence of results that would haunt them: a 2-2 draw with Swilly, a 1-0 loss to Bonagee, a 2-2 draw at Fanad and a 3-3 stalemate with Harps.

McVeigh says: “This time last year, we started dropping stupid points. Those points we lost around this time last season cost us when it came to the end of the season. That’s why it was so important that we started well this season.

The likes of Sean McCarron, Lee Toland, Conor Tourish, Chris Flanagan and David Shovlin have all worn the Candystrripes in their time and McVeigh believes Sunday will present a stern test for Rovers. On the basis of the evidence already served, City look capable of mounting a test to champions Cockhill and challengers Rovers.

McVeigh says:“It’s a big game for us. Derry is a tough place to go. They can take points off anyone, but we’ll prepare properly and go there looking for a result.

You don’t know really what you’re going to get with Derry. Even if they have a young team out, they’ll always have a wee bit of quality. They could always have a senior player or two as well. You’re always guaranteed a tough game off them, anyway.

“Derry have so much quality. They might be young, but their Under-19s can give anyone a tough game. They love to play football and you can’t take them any way lightly at all.”

McVeigh scored the opener in last season’s 3-0 Knockalla Caravans Cup final win over Glengad United. He made a place in the side his own, having been Cup-tied for the previous term’s run to the Intermediate Cup final at Aviva Stadium.

His brother, Paul, is among those to have left this season as the guard changed somewhat at Leckview during the summer months.

Having played for his native Fanad earlier in that campaign, the midfielder was unable to play for Rovers. Sunday’s 4-0 win over Bonagee has put Rovers into the national hat again.

McVeigh says: “I’d just joined the club the time they got to the final. I was there for the run, but wasn’t togged. It was a good experience, still, to be involved. I stayed with them, trained with them and all of that.

“We’d love a good run in that Cup again. It’s great to be playing those different teams.