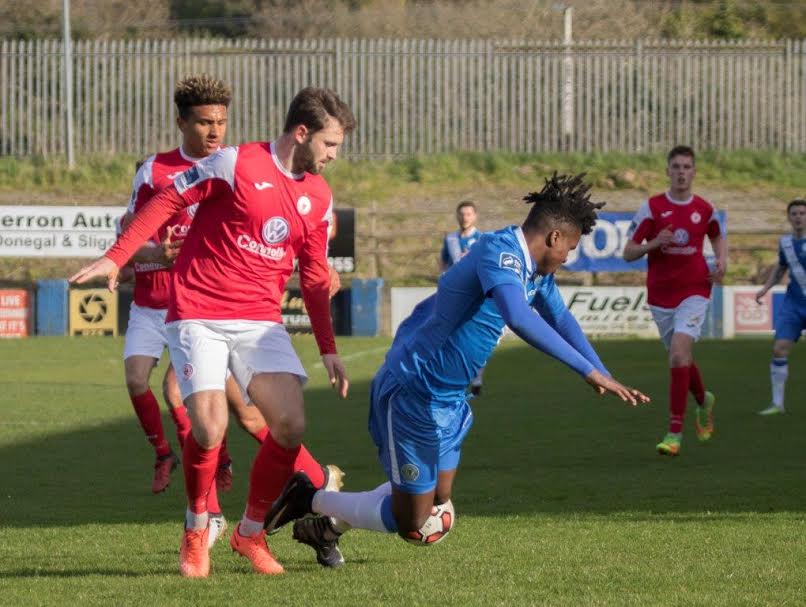 Kyle Callan-McFadden agrees new deal at Sligo: “I want to push us on”

Kyle Callan-McFadden has penned a new one-year contract at Sligo Rovers – and the Ramelton man is already looking forward to the 2018 season.

The towering centre-back had a fine season in the Sligo rearguard and was relieved as the Bit O’Red survived relegation.

Callan-McFadden – who was tipped as a possible signing for champions Cork City – and Rhys McCabe have confirmed that they will be at the Showgrounds next year, with Donegal town’s Jack Keaney and Ballyshannon’s Ed McGinty also under contract for next year.

“I’m delighted to be here for another year. I really want us to push on next season,” Callan-McFadden said.

“I’ve loved it here this year. This league is very under-rated. I’ve really enjoyed my time here so I’m delighted to stay for another year.

“The lads are great. It’s one of the tightest groups I’ve worked with. It shows how tight we were to get us out of this relegation battle. The gaffer came in and he said it was his job to keep us out of the division below and he did.

“We’re a close knit team and we’re really looking forward to next season to do better things.

“We want to go into pre-season and hit the ground running. Hopefully we can end up the table higher. This is about building for next season.”

The 22-year-old signed for Sligo after returning from a spell in America, where he played with Orlando City B.

The former Norwich City man said: “In the first two or three games it took me a while to find my feet. Playing in America, it’s a much slower pace to the game. It’s really in your face here.

“After those first two or three games, I started to find my feet and then I really started to enjoy myself. I think that showed in some of performances as well.”

Lyttle said: “For me Kyle is one of the best centre backs in the league.

“He’s got everything, he puts his body on the line. He can play as well, he’s got a turn of pace and attacks the ball really well.

“More important what he has shown me is huge leadership qualities in this campaign. He grew in confidence and he became a man in a matter of months.”