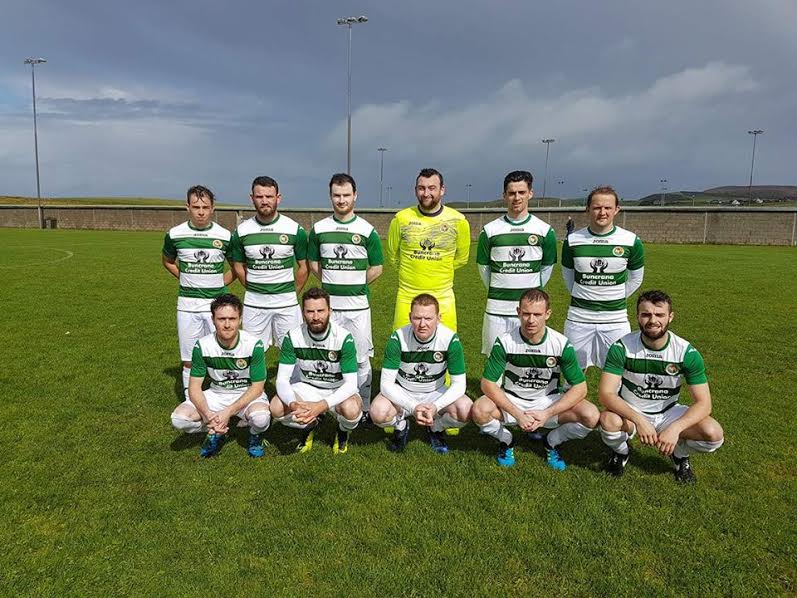 Swilly Rovers and Bonagee United shared the spoils in a 2-2 draw that earned each a first League point of the campaign.

A share of the spoils in a very entertaining game played in glorious sunshine at Swilly Park.

Matty Harkin, who was very impressive for Bonagee throughout, almost put the visitors ahead in the first minute when through on goal, but shot just wide from a good position.

Swilly Rovers went ahead on 8 minutes when Kennedy Ansah’s superbly struck free kick was parried by Gareth Wade, the former Swilly goalkeeper, in the Bonagee goal & the smart thinking Jordan Nugent nipped in to score from close range.

Swilly went two up on 20 minutes when a superb cross from the right from Ciaran McHugh was met by Marty McDaid whose stunning diving header beat the advancing Gareth Wade.

Jordan Nugent almost made it three on 26 minutes when Gareth Wade produced a stunning save to stop the great effort.

Matty Harkin and Dean Larkin both went close for Bonagee just before the break but Swilly keeper Sean Friel was equal to the task.

In the second half, Bonagee shortened the deficit on 55 minutes when Michael Funston freekick was headed home in some style by Jamie Lynah.

On 62 minutes Bonagee were level when Matty Harkin found space in the penalty box to fire home from 10 yards.

Bonagee piled on the pressure and Michael Kusi produced a superb intervention to deny Dean Larkin when it looked as if he was about to score. Swilly had a few half chances on the counter attack but the game ended all square which was a fair result.

After an even opening, Cockhill were first to threaten when a Paul McDermott cross aiming for Garbhan Friel was intercepted by Joe Boyle.

Harps went ahead on 13 minutes when Adam Duffy was released and finished confidently past Lee McCarron.

They went two up on 26 minutes Duffy again sprung the offside trap and squared for Steven Doherty to convert from close range.

Cockhill pulled a goal back in 35 minutes when Boyle was penalised for time wasting and Friel smashed home the resulting free kick.

Cockhill equalised on 42 minutes when Friel released Moran on the left side and he slotted low past Boyle.

The comeback was complete on 45 minutes when Friel converted a penalty after Coyle was tripped in the box.

Cockhill added two quick goals at the beginning of the second half.

Their fourth goal arrived in the first attack of the half when Friel completed his hat trick after a clever pullback from Moran.

A minute later it was 5-2. Moran’s cross from the right eluded everyone and nestled in the far corner.

Harps stuck to their task and got a goal back on 52 minutes when Dylan McCroary slotted past McCarron.

Cockhill restored their three-goal advantage on 59 minutes when Ronan Doherty cut in from the left and passed the ball to the far corner past Boyle.

It was 7-3 on 69 minutes when, after great work from Friel, Malachy McDermott fired home from the edge of the box.

Paul McKinney made it eight for the home team when he slotted past Boyle after James Bradley squared to him.

Lee McCarron denied Harps a consolation with a fine penalty save from McCroary on 90mins.

McCarron was beaten in injury time when a near post header from Zach Gorman found the net.

Letterkenny Rovers came from behind to defeat Derry City Reserves at Templemore and join the Candystripes and Cockhill at the top.

Sean McBride struck late for Derry, but it was too little, too late.