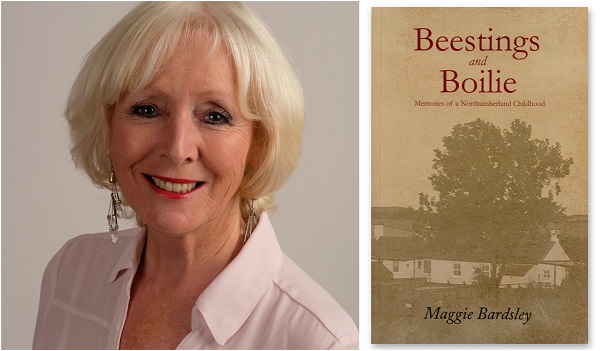 Maggie Bardsley has released her memoir detailing her family’s difficult post World War Two emigration story, leaving behind their home in Donegal in search of a better life in England.

Her memoir, titled ‘Beestings and Boilie – Memories of a Northumberland Childhood’, tells the tale of her family’s journey across the Irish Sea.

Her father was the first to leave – with only enough money to pay for his fare. Her mother and siblings had to wait two long years before joining him.

Before embarking on their trip, her mother had never set foot further than five miles from her home in Malin Head, and was faced with a dismal and arduous journey aboard a cattle ship.

Speaking to Donegal Daily, Maggie says: “My parents were born and brought up in Malin Head, Co Donegal. They married in 1940 and at the latter end of the 1940s emigrated to Northumberland in the north east of England, which is where I was born.

“My memoir recounts, briefly, their life in Malin Head, how my father left his family behind for two years to work on a farm before he had the means to bring them to England to live, how my mother and older siblings had to endure a dreadful journey across the Irish Sea as third-class passengers on a cattle boat, and a heartbreaking choice my mother was forced into at that time.

“The rest of the memoir is set in Northumberland, but Malin Head is referred to frequently in the text.

“In the forty years my mother lived in England she pined to return. Her wish was granted when my father retired.

“The memoir is told through my eyes and describes the adventures and perils of farm life; a tragic accident; a devastating fire and a long barefoot walk across the sands.”

Born Margaret Toland in 1950, Maggie is the sixth of eight children. She left school at sixteen and worked as a laboratory technician for ICI. Three children and seven years later she returned to work in a public library.

At the age of thirty-nine she changed direction and began what was to be a successful career in Information Technology.

Maggie’s writing output has been a mixture of holiday journals, short stories and poetry. ‘Beestings and Boilie’ is her first memoir.

She currently lives near Much Wenlock in Shropshire, but enjoys visiting Malin Head regularly, where her sister and brother still reside.

For more information, you can get in touch with Maggie at mmbardsley55@gmail.com.

To pick up a copy of her moving memoir, you can find it on Amazon.