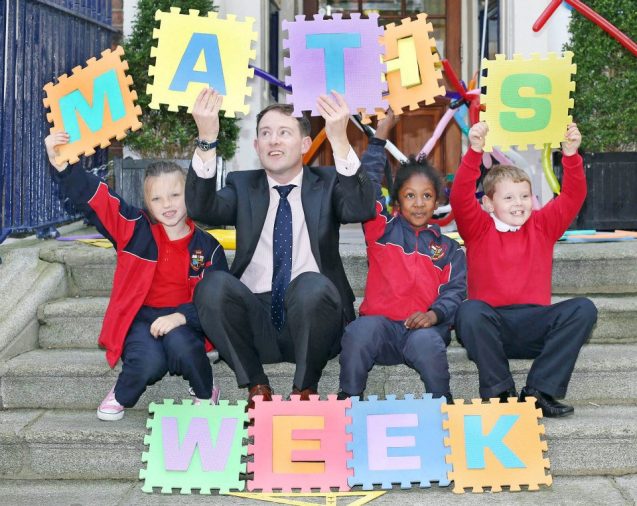 A grand sum of 4,902 school children in Donegal took part in a Maths festival last week when ex-Hurricane Ophelia threatened to stop the fun.

Although ex-Hurricane Ophelia brought two days of events to a halt, that didn’t stop the Maths Week team who battened down the hatches and brought the event online. Over 6,000 people tuned into the Maths Week live stream of activities over the two days of school cancellations.

Launched by Education and Skills Minister, Richard Bruton TD, the 12th annual Maths Week began with Maths in the City at St Stephens Green on 14th October and culminated with a Celebration of Mind at the Botanic Gardens in Dublin on 22ndOctober.

Mid-week Maths Week events stretched from Dublin to Belfast, across to Arranmore and the Aran Islands, to Cork, Waterford and everywhere in between!

One of the many highlights of the week was the presentation of the second annual Maths Week Ireland Award to Dr. Peter Lynch, Professor of Mathematics at University College Dublin in recognition of his long standing promotion of mathematics awareness in Ireland.

Sheila Donegan, Co-Founder, Maths Week said: “It is estimated that over 1.5 million people have engaged with Maths Week over the past twelve years, helping them to have a more positive attitude towards maths. This is supporting interest in STEM related careers among our young people and numeracy in society generally.

“The week is a true partnership of people working together for a common aim – a very important aim – to promote mathematics for all. We are already looking forward to next year’s Maths Week in October 2018. We’ll be aiming to further increase the number of people taking part and to spread our message even further.”