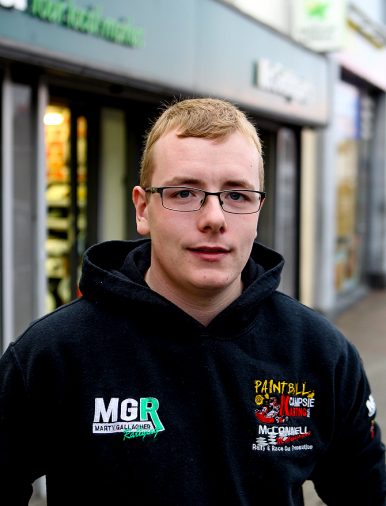 Today at Limerick Institute of Technology a young Donegal man will step up onto the stage to receive his graduation certificate for transport management.

Last week that same Letterkenny’s Martin Gallagher was stepping off the world stage when he competed in his first ever WRC (World Rally Championship) in Wales at the weekend.

We met Martin in between events this week when he returned to Letterkenny to catch up on a bit of sleep, repair the battle scars and replace his racing overalls for a graduation gown.

It was a case of the school of hard knocks in Wales last week as Martin had everything happen to him as he was determined to get to the finish of his first world rally as a learning process for next years season. 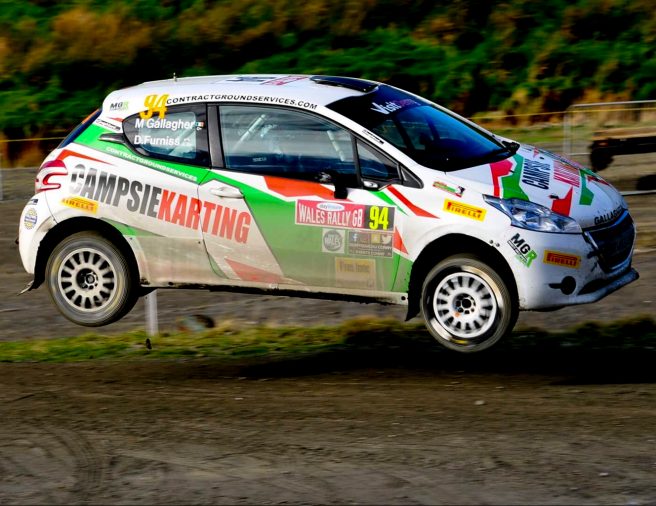 When Martin is not rallying or studying transport management he is behind the wheel of a forty-foot Volvo transporting containers from the port in Dublin around Ireland, before that he was transporting all the letters from Ireland bound for England from An Post’s central hub in Portlaoise.

Martin got a job as soon as he finished college in May this year. He hopes to get a job as a transport manager in the future and feels that driving trucks now will give him a great insight in his future career.

Left hooker!
As with Martin’s career at work, in his rallying he is planning for the bigger picture too, so Martin’s rally car, a 190bhp Peugeot R2 is left-hand drive, which is the side the steering wheel was for on most of his fellow competitors taking part in the WRC in wales at the weekend.

Martin also has a left-hand drive 08 VW golf which is great for the learning process for rallying a “left hooker”, but not so good when you go to a “drive through” at Mc Donald’s and try and order a happy meal from the passenger’s side of the car!

While most of the WRC teams were preparing their notes for the rally in Wales in specially set up recce cars Martin did his recce of the rally in his left-hand drive Volkswagen road car. There were advantages in that the diesel Golf was the same view that he would be seeing when he was competing in his left hand Peugeot and also it was easy on diesel and kept some of the costs down.

The downside was that his road car was too low for the forestry roads and has the battle scars to show after 1800 miles of preparing for the event last weekend.

Martin’s rally got off to a good start and was laying second overall in R2 and had a good lead on the car in third. That was until he took a left-hand corner in his left-hand drive Peugeot 206 in fifth gear when he should have been in second or third!

The car went around on the road and was now travelling down the stage backwards. There were big brutes of trees everywhere along the stage but they managed to miss them all until the car came to a stop in the bog.

They did get back on the road but now they had a puncture but managed to get the car to the end of the stage and change it.

Non starter
The following day their rally went from bad to worse when the Peugeot refuse to start that morning. The Citroen team were near hand in the service area and tried everything like changing the CPU unit the throttle box and everything but it was of no avail.

While the Citroen guys were discussing the problem in French, Martin threw in a few choice words as well to try and help things along. When the crew went over the maximum service time and were effectively out of the rally the car then decided to start at the first turn of the key!

On the World Rally the crew were able to restart the event on the final day and get to the finish and get the much-needed stage miles at WRC level under their belt to prepare for next years season.

All in all Martin really enjoyed his first ever WRC alongside Welsh co-driver Dale Furniss. Normally his navigator is Convoy man Dean O’Sullivan but he was unable to get the time off for the Welsh event. The young Letterkenny man has also competed locally on the Donegal International rally this year and competed in the BRC. 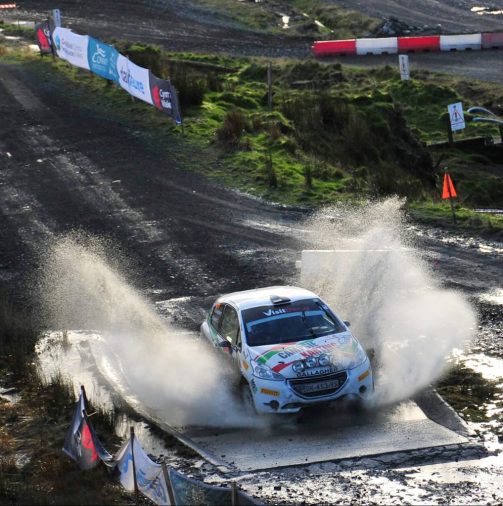 Martin Gallagher on his way through the water on the WRC in Wales this week.

Martin is sponsored by the family run company Campsie Karting and get great support from his father Eamonn and mother Noreen, but are always on the lookout for more needed sponsorship for their coming season.

Goodbye George
At the weekend Letterkenny lost its annual hour of summertime but also lost the sunshine of George Hegarty who passed away after a very short illness. 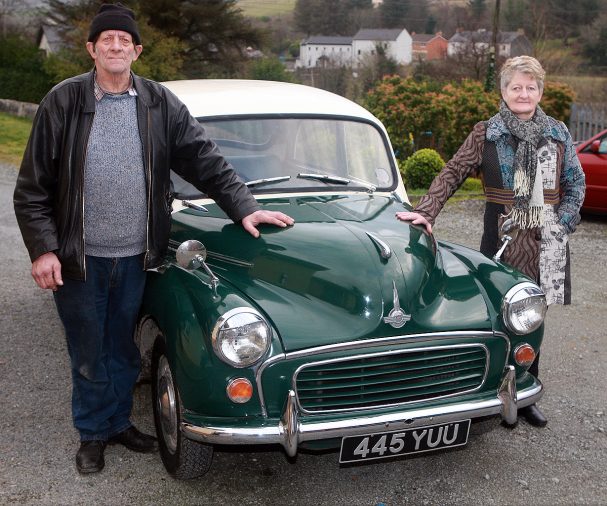 George and Kathleen Hegarty with their Morris Minor. with Newmills in the backgound. Photo Brian McDaid

Sir Alex Issigonis would have been more than welcome at the service of thanksgiving at Conwall Parish Church for George in Letterkenny. The Rev Mervyn T.E. Peoples, who conducted the service made the announcement from the pulpit that there was nearly as many standing outside the church that couldn’t get in than those who managed to get a seat inside.

Alex Issigonis was the man who designed the Morris Minor which was once described as a car that is more than a car, it is a familiar, dependable friend that does everything asked of it, for astonishingly little in return.

George Hegarty and his Morris Minor were one of a kind. Someone of his family said over the weekend at George’s wake that he had so little but gave so much. 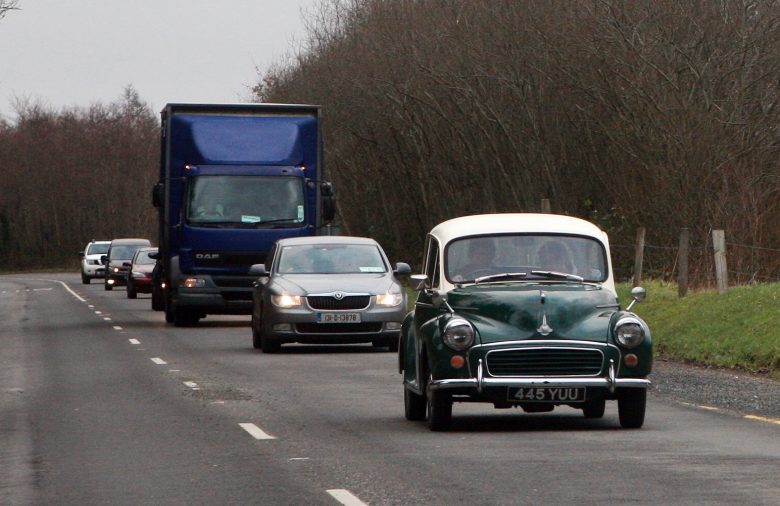 George Hegarty out for a run in his Morris Minor not so long ago. Photo Brian McDaid

It felt as if we had all piled into George’s old Minor on Sunday at Conwal Parish Church and went on one final journey with a man who could leave the designer Sir Alex in his shadow, George could get more into a Morris Minor and could take more out of one than Mr. Issigonis ever designed the car to do.

George was welcomed into a packed church with a fine rendition of Danny Boy where The Rev. Mervyn People’s recalled George’s life, his love of prayer in private and his love of his family. Then he recalled the finer facts on forklifts, filler and furry friends.

The congregation filled the packed church with soft laughter mixed with pain as his family tried their best to be brave on a very difficult day. 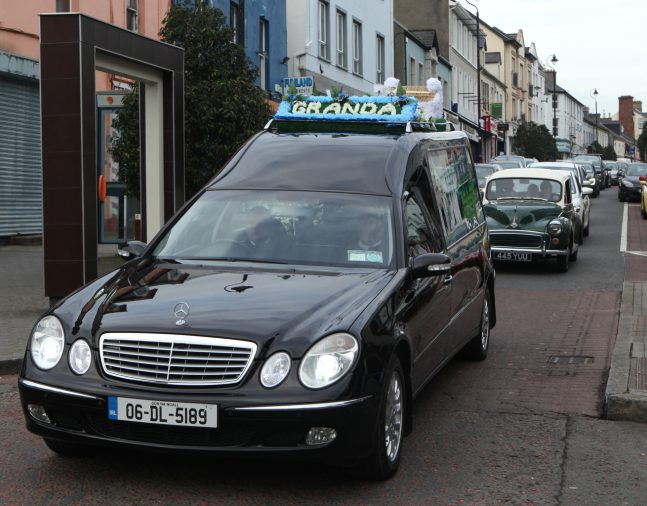 The late George Hegarty on his last trip down Letterkenny on Monday. Photo By Brian McDaid

Lee Hegarty, a lone piper, piped George on his final journey out of the church and his family took George on one final spin down the Main Street in Letterkenny where they remembered George in that familiar way that George greeted everyone he met.