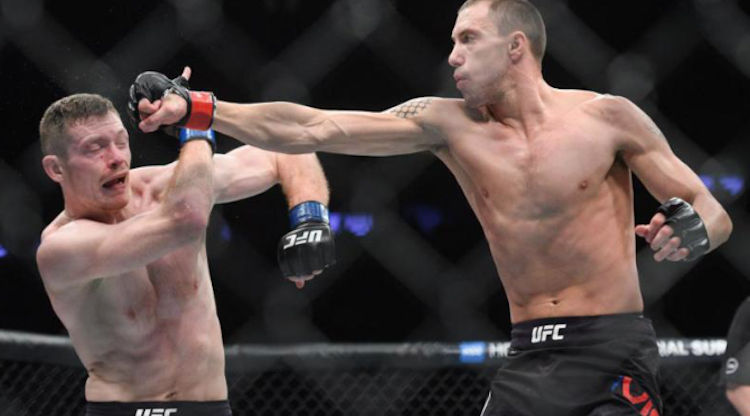 Joe Duffy was stopped by James Vick last night at UFC 217 – but fight fans on Twitter believe the bout was prematurely stopped.

With just ONE second remaining in the second round, referee Todd Anderson moved in to peel Vick from the 29-year-old Donegal man.

Vick (12-1, 8-1 UFC) floored Duffy (17-3, 4-2 UFC) with a cracking right uppercut. With Vick getting to work with some ground-and-pound, Anderson waved it off just before the buzzer.

Many fans believe Duffy should have been allowed continue – what do you think?

James Vick stops Joe Duffy in the final second of the second round! 😮#UFC217 pic.twitter.com/gMLIQXHPrT

@Duffy_MMA unlucky Joe, ref shouldn’t have stopped it, Vick’s landed one punch on the ground…be proud, we are of you!

Duffy stoppage was harsh given it was only seconds left til the bell!Vick gained a fan in me though!!Big Talent and fun to watch #UFC217

Vick win wasn’t fair on Duffy. He took one punch and defended 5 on the floor. Then the bell then round 3…. @joerogan #ufc217

Not a fan of that stoppage. Vick's punches were hitting Duffy's arms and he was intelligently defending himself. Round was almost over. Would have liked to seen more. At the same time, I do believe Vick is the real deal. #UFC217

I still think Vick was gonna win but felt the stoppage was bad.He covered then improved position. What could Duffy have done 2 show hes ok?

To be fair to Duffy, I think he had his guard back up and ref shouldn’t have stopped it that early. Yet I still think Vick would have won it

Great win for Vick. Tough one for Duffy being so close to the bell. Fought well up to that point too.