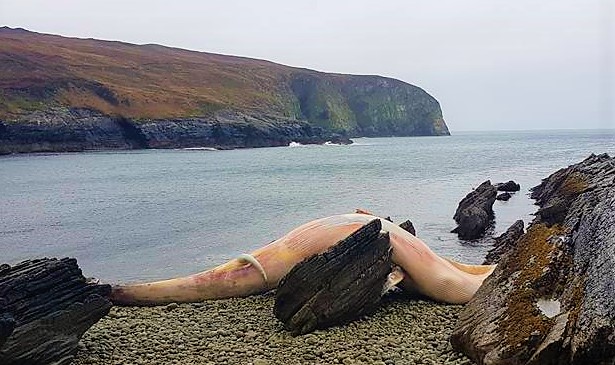 Questions are being raised over a huge beached whale on Arranmore Island which is said to be causing quite a stink.

The 20ft deceased creature is believed to have washed up on Friday last and currently lies across rocks at Beal a’Chraois on the eastern side of the island. 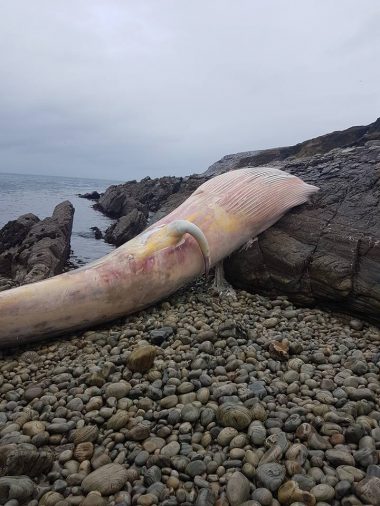 Arranmore RNLI crew members were alerted to the whale when a local resident noticed seabirds flocking around something white in the water.

The crew were called to action during a presentation in the Waterfront Hotel Dungloe. They were being honoured with a €25,000 cheque – the proceeds of a fundraising ball – when they had to leave the celebrations early to identify the issue. 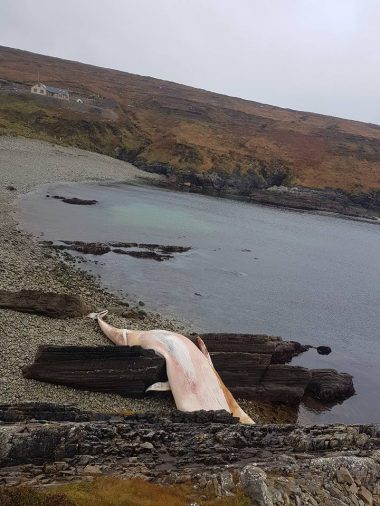 Nora Flanagan of the Arranmore Lifeboat told Donegal Daily the whale is now decaying in a small cove and creating a strong smell.

“We are not quite sure what the plan is with the whale yet. If there is a high tide in the right direction it may take it away. If not, arrangements will have to be made with the council to lift it,” Ms Flanagan said.

Gareth Doherty of the Donegal Irish Whale and Dolphin Group said it is likely to be a fin whale which has been dead for some time.

“These whales should be a slate grey colour. The yellowing shows it has to be dead for at least two weeks,” Gareth told Donegal Daily.

Fin whales are the second largest living mammals on earth, which can grow up to 70ft in length. 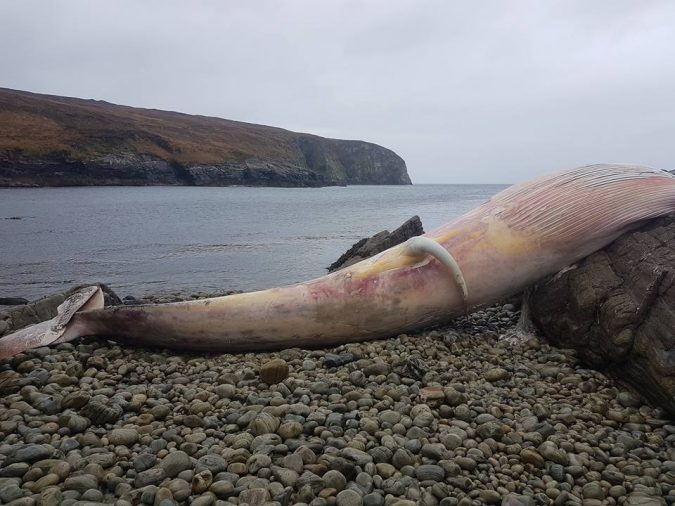 Gareth said: “The animal is in good condition apart from the colouration. It obviously died at sea.

“Without a DNA test it would be hard to identify the species. My best guess is it’s a fin whale, but they are not usually seen in Donegal. Fin whales are mostly seen off Cork, Waterford and Kerry.

“In my memory, Donegal hasn’t had a fin whale stranding in a long time.”

Fin whales usually gather at the Continental Shelf far out in the Atlantic, he said, and this would explain the many weeks it took to wash ashore.

Gareth warned that people should not approach or touch the whale, as some are highly contaminated. 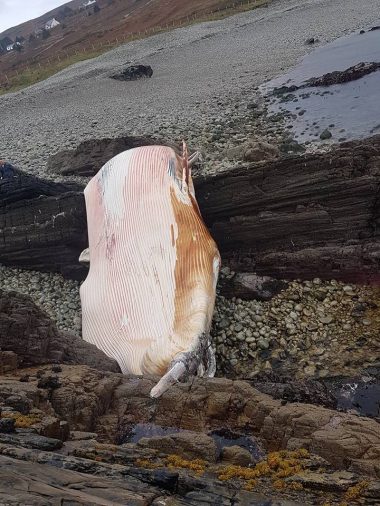 “It could have died of natural causes, been hit by a boat, caught in a net or died of poisoning of some sort. There is no suitable veterinary analysis in Ireland yet for whales, which is something the IWDG is trying to get implemented.”

As for the outcome of the body, Gareth said there are a few possibilities:

“It’s either going to lie and rot or get towed out and sunk. If the body is sent to the seabed other creatures can feed off it. For example, a 70ft long whale is 70 tonnes in weight, which is basically 70 tonnes of meat. The biodiversity then feeds off that,” Gareth said.

This will be an interesting find for the Irish Whale and Dolphin Group to study, as they monitor animals alive, dead and those swimming around the coast for a better understanding of the creatures around the island.