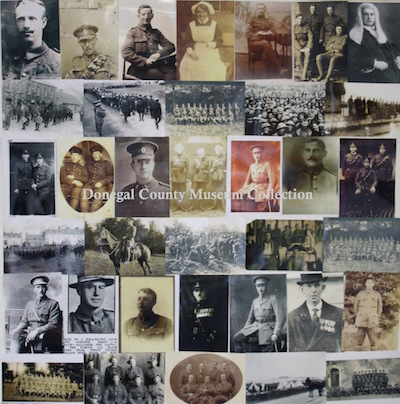 Donegal County Museum has been undertaking research on all those from Donegal involved in World War I for a number of years.

The Museum has previously organised exhibitions and events examining the story of Donegal’s role in the War.

Now the Museum is updating and reprinting the County Donegal Book of Honour, The Great War 1914-1918. To assist the Museum in updating the Book of Honour the public are invited to consult the draft version of the Book to check the details provided and advise the Museum of any new names to be added.

The County Donegal Book of Honour, The Great War 1914-1918 contains the names of all those from Donegal who died during World War I.

In the years since the book was first published more information has become available on the men and women who died, including those who enlisted in countries such as Canada, Australia and the USA.

The Museum plans to launch the updated and reprinted Book of Honour in November 2018 to commemorate the centenary of the end of World War I and as a tribute to all those from Donegal who died.

In updating the County Donegal Book of Honour: The Great War 1914-1918, the Museum is asking the public to consult the draft version of the Book which is available on www.donegalcoco.ie or by appointment in Donegal County Museum.

If you have any updated or new information or wish to amend any information, please fill in the details on the Book of Honour form (available on the Council website) and post or email it to County Donegal Book of Honour, Donegal County Museum, High Road, Letterkenny Co Donegal; or email to donegalbookofhonour@donegalcoco.ie by the 31st December 2017.

Have your say on the “County Donegal Book of Honour, The Great War 1914-1918” was last modified: November 7th, 2017 by Stephen Maguire
Facebook0Tweet0LinkedIn0Print0
Tags:
Book of HonourDonegal County MuseumWorld War I