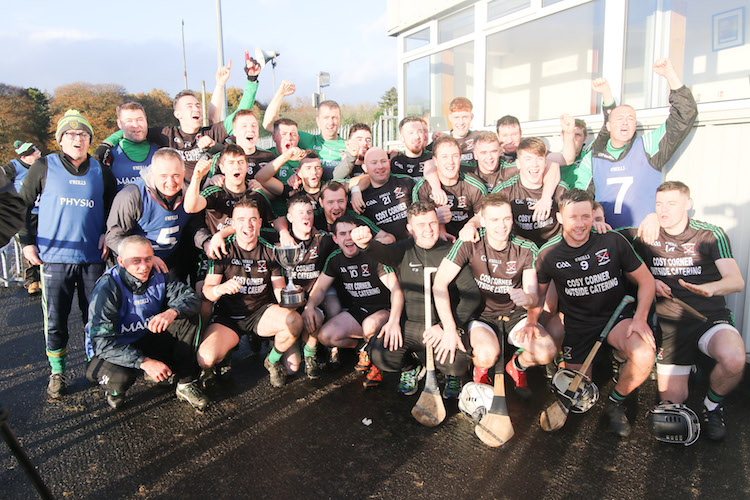 Listen: ‘There wasn’t a hope in hell we were going to lose’ – Kevin Campbell

Kevin Campbell says Setanta would have faced down even the Irish Army in Sunday’s Ulster JHC final if it had come to it.

Setanta tasted their first ever slice of Ulster final glory with a win over Na Magha at Sean MacCumhaill Park.

Captain Campbell landed 11 priceless frees while Declan Coulter hit 1-6 as Setanta finally got their hands on the provincial prize.

“It wouldn’t have mattered if we were playing the pick of Ulster, Tipperary, if the Irish Army had been out there, we were going home with that Cup,” Campbell said.

“We were’t leaving today without that cup. There wasn’t a hope in hell we were going to lose.”

Campbell lost Ulster finals to Glen Rovers of Armoy in 2007 and to Lisbellaw in 2008, but Setanta made amends on Sunday.

Campbell said: “It’s days like this you dream of as a young boy, when you’re pucking around with your friends. It’s great to get over the line.

“It would have been a shame if the likes of Danny Cullen, Richie Kee and Bernard Lafferty didn’t get an Ulster title.

“It wasn’t good enough with our history that we didn’t have an Ulster title. I suppose this is a bit of redemption.”

Campbell referenced ex-players like Anthony McDaid, Warren Scanlon and Damien Browne, who were in attendance as he outlined just what the day meant.

Setanta burst from the blocks with all the energy and hunger of a side that wasn’t going to let it slip this time.

Campbell said: “We came out very well. We went nine up and maybe a bit of complacency set up. We got in at half-time, we called boys out and there were some home truths.

Listen: ‘There wasn’t a hope in hell we were going to lose’ – Kevin Campbell was last modified: November 7th, 2017 by Chris McNulty