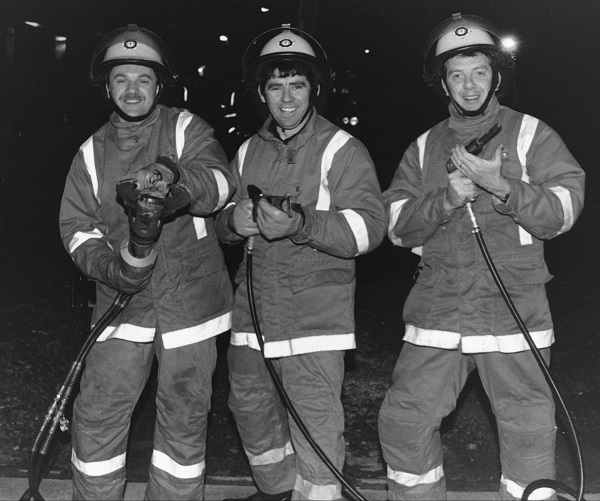 I’m the “old” in the heading this week. For most that’s a subject that we try to avoid.

But if I can borrow your time, as the fire service did mine you might see the benefit of my journey as I wait with anticipation with my fingers crossed that the baton will be successfully handed over to the new kids on the block. 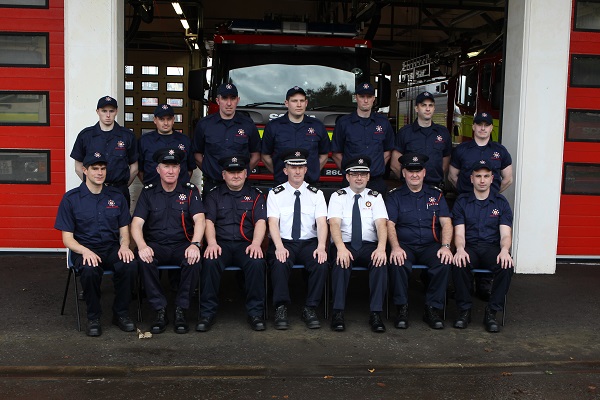 Blues
If you live in Letterkenny you might have noticed a lot more fire engines heading around Letterkenny this last few weeks with their blue lights flashing. Don’t be alarmed, they are only training.

All going well at the end of this week, Co. Donegal will have nine new fire-fighters who will soon start as retained firemen in their native towns. Over the last three weeks these men have undergone their basic training which will introduce them to the fire service. If they are successful in passing the three-week training course they will become firemen and over the coming years they will undergo specialized training in all aspects of the job of a retained firefighter.

Delta-Lima 11
32 years ago I went through my fire service training. Then sat at home waiting for the siren to blow on the roof of the old fire station on the High Rd. for my first fire call. The three new faces on Delta-Lima 11 (Letterkenny’s fire engine call sign) in 1985 were Eddie Curran, Eamon “Sam” O’Donnell and myself.

At the time we always felt we had big shoes to fill as years of experience was making way for the new boys. Eddie Curran replaced his father Bobby, who was the station officer. Eamon “Sam” O’Donnell replaced the Sub Station Officer, Willie Peoples and I replaced my next door neighbour from Wolfe Tone Place, Jim Tease, the driver of the fire engine who retired the year before, all of whom were there from the start of the fire service proper in Letterkenny. 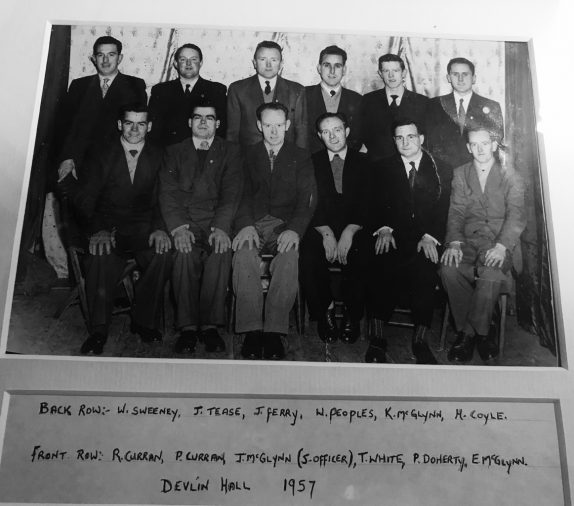 Know the drill
For anyone that had worked as a member of the retained fire service in Co. Donegal or ever had a member of their family in the service they will all well know how their whole life rotates around the call of the siren or the rattle of the bleep. Fire calls are never 9 to 5 , never planned.

An evening out or a planned day away could come to an abrupt end with the sound of the siren. Family and friends knew the drill to bail out of a car as quick as possible to let the one on call away to attend the fire call. With the bleep and siren the adrenaline soon kicked in and you focused on getting to the station as quick as possible, get your fire gear on and get to the call. 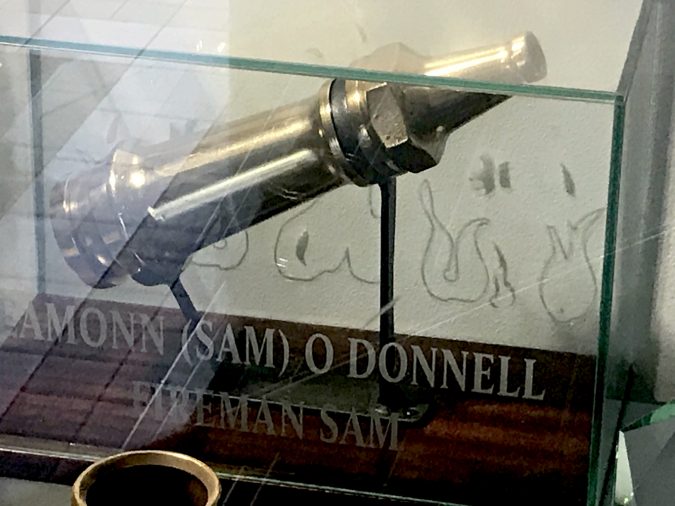 A old original brass fire branch and nozzle which were made into a memorial in memory of Letterkenny’s Fireman Eamon Sam O’ Donnell. Photo Brian McDaid

Easy singles
One of the first big fires that us new recruits attended was a house fire out in the country. When we got the fire under control we had to stay and monitor the scene for hours after. The fire call was on a bank holiday and everything in the nearest town was closed. An elderly lady who once had tea rooms in the town offered to make all of the firemen something to eat. We were all welcomed into the old tea rooms and served with the finest of china cups and saucers.

Everything was going fine until we tucked into the freshly made sandwiches only to find that in the rush to get the tea ready the kind lady forgot to take the plastic wrapping off the easy singles cheese slices. We all managed to pocket the Cheese slices and eat the sandwiches without causing to much concern to the kind offer from the lady with the tea rooms.

Over the years Letterkenny Fire Brigade attended its fair share of difficult fires and car accidents, and rather than dwelling on the harder times in them years. Events like the small mishaps like the easy singles became happy memories. 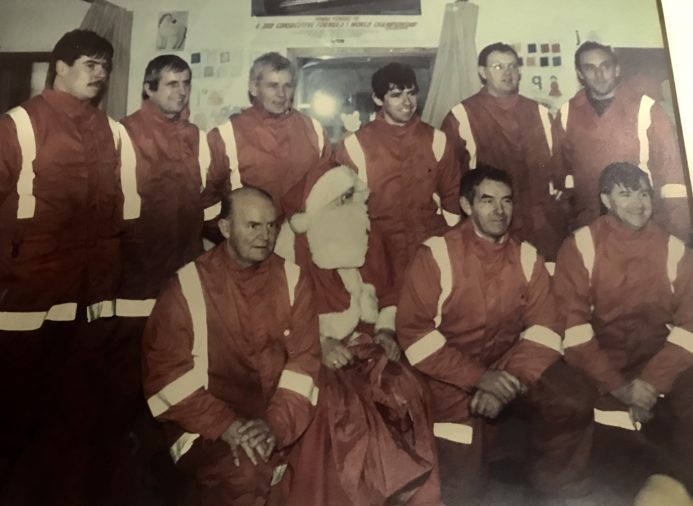 Fireman Sam
In November 1987 a new children’s program started on TV called Fireman Sam. It was to take the world by storm. This animated children’s program follows the adventures of the title hero and his colleagues as they protect the citizens of the Welsh town of Pontypandy. 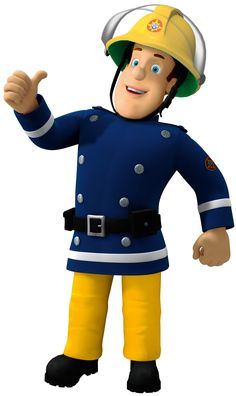 Whenever the alarm sounds, brave Sam and his fellow fireman can be counted on to jump into a fire engine, to battle blazes, mount rescue missions, or provide medical attention to those in need. The tv program not only taught valuable lessons on fire safety to young viewers but reinforced the importance of staying calm during an emergency.

Letterkenny was ahead of its time in the 80s as they had a Fireman Sam of their own in Eamon “Sam” O’Donnell, years before it was ever an idea for a TV program. Our Sam took great joy in introducing himself as Fireman Sam when we were out on fire calls or giving fire safety talks at the station. But unfortunately, unlike the TV programme our Fireman Sam’s story did not have a happy ending, well not yet!

At the end of this week fingers crossed Letterkenny’s two latest recruits, Stephen Kelly and Ronan O’Donnell will hopefully come through their three-week basic training successfully to replace the last two members of Letterkenny Fire Brigade who recently retired, Michael Molloy, and myself.

Big Shoes
One of the new hopeful recruits, Ronan O’Donnell’s late father Eamon “Sam” O’Donnell would have been 57 past in July this year had he not got the call so young from this life at the turn of this century. He would have so much enjoyed the couple of years together with his son Ronan as fellow firefighters for the Letterkenny Fire Brigade.

Life is not like that unfortunately and like the fire service we don’t know when we will get our call from this life. Sam was just in his early 40s and a member of the Letterkenny Fire Service when he passed away, that was also the case with Eddie Curran who also started in on the same day in 1985 and who also passed away earlier this year also a very young man in his late 40s.

In my own mind I would like to think that Sam’s son Ronan (if successful) is not only taking over the baton in the fire service for his late father “Sam” but along with the other new Letterkenny recruit, David Kelly they are also representing us all as the new kids on the block to give fire cover night and day in the unofficial capital of Co. Donegal, Letterkenny.

Here’s wishing all the new recruits all the best this week as they sit their final exams before they take up the roles as firefighters.