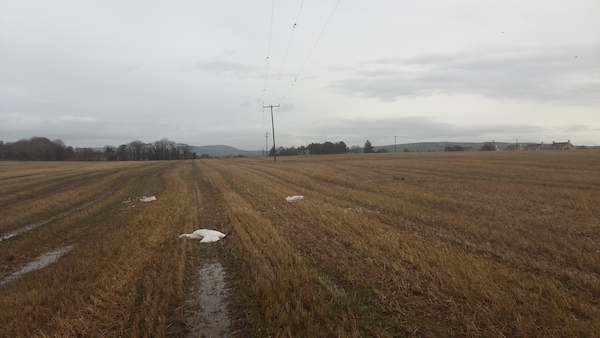 These are the shocking scenes after 15 beautiful swans were electrocuted after they crashed into overhead wires in Carrigans.

The carcasses of the Whooper Swans were found underneath electricity lines close to the village.

BirdWatch Ireland has expressed its concerns at the deaths of the birds.

A member of the public out walking found the birds yesterday.

They confirmed that the swans had collided with the wires in flight and that the cause of the birds’ deaths was electrocution.

A high proportion of the swans that were killed were juvenile birds, just a few months old. 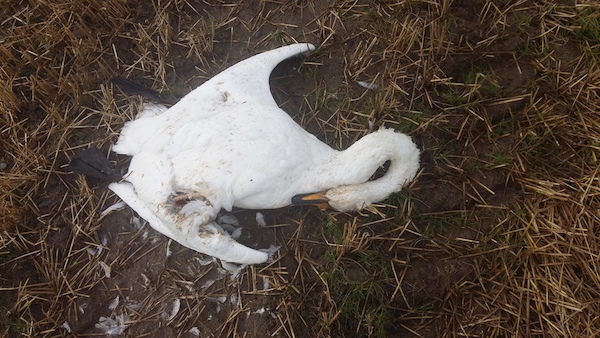 It appears that the deaths were the result of multiple separate collisions with the electricity wires over a period of several weeks.

Some of the birds were freshly dead, while others showed varying levels of decomposition, indicating that they had died on various different occasions.

BirdWatch Ireland is very worried that Whooper Swans will continue to be electrocuted at this site in the days and weeks to come unless urgent action is taken.

It has contacted the ESB to inform it of the problem and to recommend that immediate measures be put in place to prevent further collisions.

The wires in question are fitted with “deflectors” which are supposed to make them more visible to flying birds, but evidently these do not appear to be working satisfactorily in this case.

Indeed, several of these deflector devices have been knocked off the wires due to the swan collisions, further reducing the visibility of the wires.

Niall Hatch of BirdWatch Ireland said: “It is very concerning that these migratory Whooper Swans have been electrocuted in Carrigans, especially in such large numbers.

“Ireland hosts internationally important numbers of Whooper Swans each autumn and winter, and it has a special responsibility to conserve and protect them. We sincerely hope that measures can be put in place to prevent further swan deaths as soon as possible.” 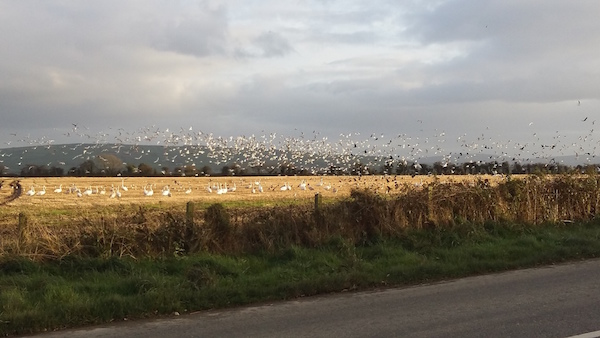 Some of the many species of birds in fields at Carrigans.