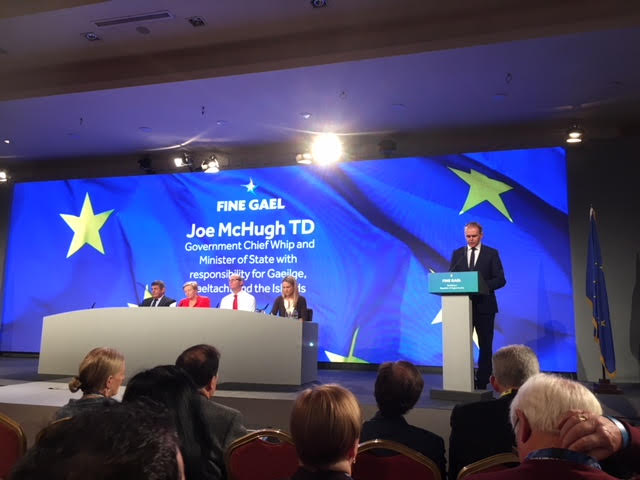 TD on Brexit: “We cannot go back to the dark days of death and destruction”

He says that given Ireland’s unique set of circumstances, the Common Travel Area must not be threatened by Brexit.

“One of the definitions and examples for a ‘border’ given by the Oxford English dictionary is as follows – ‘The boundary and adjoining districts between Northern Ireland and the Republic of Ireland’,” he said.

“We all accept on this island now that the boundary exists.

“But the border before our fragile peace process came about was something very different from a ‘boundary’.

“Because along that boundary during the so-called Troubles there existed checkpoints, road blocks, concrete bollards and in some cases craters. Everything was done to prevent easy travel across the boundary.

“And when the mass killings stopped on our island and a peace agreement was reached more than 300 crossings between north and south were opened up and border communities began to breathe again.

“Now thanks to the peace process the common travel area – first introduced in 1922 – allows for 110 million border crossings each year.

“Donegal accounted for the largest number of cross-Border commuters, with 5,600 commuters each day, 76pc of whom travelled to Derry.

“Data published in a joint report by Derry City and Strabane District Council and Donegal County Council show that there are more than 326,000 journeys made per week across the Border crossings at Derry/Bridgend, Muff village to Derry and Strabane and Lifford.

“So how did this all come about? In May 1998 the people of this country – north and south – ratified the Good Friday Agreement. Let me remind you of the outcome of our peace deal – 94.4 per cent of people in the Republic and 71.1 per cent of people in Northern Ireland voted YES to peace. In the years that followed, dioceses, parishes, farms, families and businesses became whole again.

“Crossing the border no longer involved a two hour wait at Bridgend or Aughnacloy. Just going to Dublin from Donegal became a whole lot easier. It was liberating. In recent years people from Leinster and Munster have found just how great it is to come to Donegal on holiday.”

Minister McHugh then explains how any changes to the border could lead to friction and could impact the thousands of people that cross the border each day for work.

“Now another vote – this time by the people of Britain – has effectively said that the ideals and commitments of the Good Friday Agreement should play second fiddle to Brexit.

“We cannot allow this to happen. I respect the UK vote on Brexit. That is democracy. But what about the democratic will of the people of this island, north and south who voted for a frictionless border, a boundary without checkpoints, delays and all the hassle that came with it?

“In Letterkenny, Co Donegal – finance company Pramerica – employs hundreds of people from the North. There are dozens of other examples where real free movement of people and goods has changed the way we live along the border, connecting people in ways that weren’t even imagined before Partition.

“I know my colleague Foreign Affairs Minister Simon Coveney is working tirelessly at EU level to ensure what we have, we hold.

“Brexit cannot be allowed to get one over on the Good Friday Agreement. We cannot allow anyone to take us back to the dark days of death and destruction.

“There’s a saying in Irish – and many other languages around the world – that we’re better together.

“Over the past 20 years since the foundation of the peace process we have found that this island and our neighbours have worked incredibly well together.

“It’s our duty in this jurisdiction to make sure that continues.”