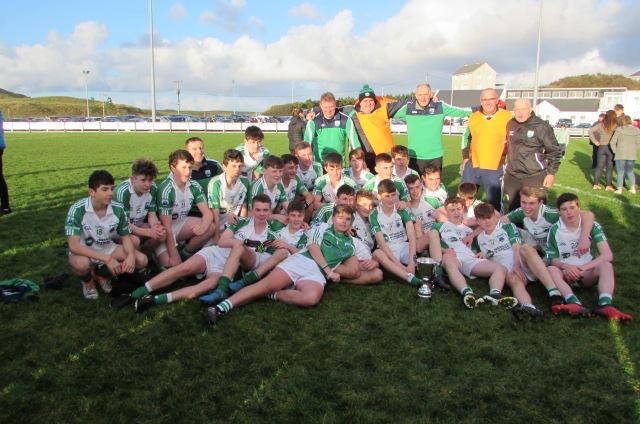 Gaoth Dobhair bow out of Ulster U16 race

Derrygonnelly Harps qualified for a first ever Ulster Club Semi Final at Under-16 level with a commanding performance that seen them dispatch Donegal champions, Gaoth Dobhair, at a cold but dry Gardrum Park in Dromore on Saturday afternoon.

For Derrygonnelly Harps it is the fourth time of trying with first round defeats in 2009, 2014 and 2016 but an overall super performance from the Fermanagh side rightfully puts them into the last four of the competition.
Gaoth Dobhair came as surprising Donegal champions after dethroning St Eunans Letterkenny in the Donegal County Final just six days previously on a scoreline of 0-12 to 2-5. The Gweedore side came into this game in a hugely confident frame of mind with a number of talented players with at least two set to go and join soccer club Derry City FC in the next few days.
Derrygonnelly were first to raise a white flag in a low scoring encounter with a Rian McGovern score putting his side one ahead. Gaoth Dobhair responded with a fine score of their own as Eamon Gallagher took in a great ball from Kyle Duggan before finding his range to level the sides after 13 minutes.

Derrygonnelly would lose Connor McGovern early on to injury and his replacement, Eoin Magee, immediately made an impact with a well struck score when he angled his shot over the bar after a neat build up involving Rhys Campbell and Rian McGovern to leave Derrygonnelly ahead by one mid-way through the opening half.
The game was extremely cagey throughout with Gaoth Dobhair constantly being faced by a determined Derrygonnelly defence who harassed, blocked and fought for every ball like their body was on the line.

The Donegal champions would make it two apiece on 22 minutes as Kyle Duggan pointed with a well struck score after good link up play involving Rory Gallagher and Lochlainn O’Dea.

Gaoth Dobhair would then lose wing half back Owen Burke to an ankle injury which was a major loss to the Gweedore side, with his replacement Liam McFadden coming on for a straight swap in defence.
Derrygonnelly full back Leigh Green whos effort and determination was second to none then got up field to point but once again Gaoth Dobhair would level the game on 27 minutes with a free from Eamon Gallagher to make it all level.

The game itself seen both teams go in at the break at 0-3 apiece with both defences hugely on top in a game that would not have been loved by the purists of the GAA world.

The second half saw Rian McGovern once again nudge his side ahead, before Gaoth Dobhair responded with a fine score from Kyle Duggan to leave it 0-4 apiece with 22 minutes remaining.

The game was becoming a bit more open but the Donegal side will look back on a number of wides and two glorious goal chances that both were missed with the help of some fine goalkeeping by Derrygonnelly custodian Lee Skuce who put in a monumental effort throughout.

Rian McGovern was having an outstanding game and his free from a difficult angle seen the midfielder point with the outside of his boot as Derrygonnelly took the lead for a fifth time and this time it would be a lead that the Harps would not relinquish.
With time ticking down Gaoth Dobhair were guilty of bad shot selection while also full credit must go to a Derrygonnelly defence that had Trojan efforts from the likes of Leigh Green, Aaron Jones and Darragh Burke who played deep to great effect for his side.
On 56 minutes, Gareth McGovern went on a lung busting 35 yard run with the ball before pointing and just moments later Cian Corrigan split the posts with Michael Doherty and Rowan Turk trying to block his shot in vain to leave it 0-7 to 0-4 in favour of Derrygonnelly with just one minute of normal time remaining.

The three minutes of injury time seen Derrygonnelly’s Conor Burns point to leave it double scores, and although Gaoth Dobhair pushed forward for a late goal they were once again thwarted with a thunderous low save coming from Lee Skuce as Derrygonnelly rejoiced with the full time whistle at the end.

Gaoth Dobhair will be disappointed to have only scored 0-4, they had a number of wides that really should have been scores and will know that days in an Ulster Club Championship are hard to come by at any level.

Full credit must go to Derrygonnelly Harps for their performance and for taking their chances when presented, they will know 8 points may not win a Semi Final but they now have the basis to move on and improve on that.
It was another hugely impressive performance by the Fermanagh champions who came through Fermanagh with a splendid win over Teemore Shamrocks in the County Final and although this game was won without their talented attacker Micheal Glynn, the future really does look extremely promising for the Harps.

Gaoth Dobhair bow out of Ulster U16 race was last modified: November 13th, 2017 by Chris McNulty