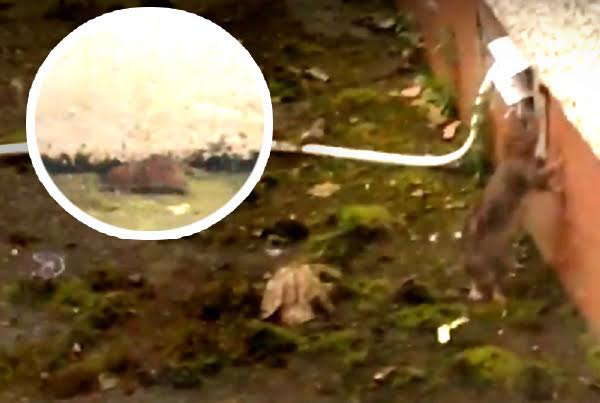 A distraught mum has revealed how her family have to sleep in the one bedroom because their house has become over-run by rats.

Denise Gibson says she is at her wit’s end after rats ate their way into her house through her attic.

The mum-of-two shares her house at Fr Arnold Terrace in Manorcunningham with partner Ross and two girls Lilly, 7, and Ella, 5.

Denise says that the situation has got so bad that the two little girls will not sleep in their bedroom.

“They are terrified. The girls aren’t getting to sleep at all and now they have taken to coming into our bedroom.

“We can hear the rats scuttling around the house. We just don’t know what to do. We’re terrified,” she said.

WATCH: Footage of the rats in the family’s backyard:

The problem with the rats has been ongoing since Denise and her family moved into the house just over four years ago.

She thinks the rats are coming from a nearby wooded area.

Denise says she has contacted Donegal County Council on several occasions and that they have sent out a pest control team.

“It gets better for a couple of weeks but it starts over again after that. It’s as bad as ever after that,” she said.

Denise said she wants to move but wants to stay in the Manorcunningham area but insists the rats are not an excuse just to get out of the house she is living in.

“This is a good house and I have good neighbours but they are all suffering with the rats the same as me.

“The council were advertising a small two bedroom apartment locally and I would move into that rather than have to stay here with the rats,” she said.

Another fall-out from her unwelcome guests is that friends and family will not visit her.

“I had a friend visit me a while back and she looked out into the back garden and told me there was a lovely squirrel in my back yard.

“When we looked closer, it wasn’t a squirrel but another huge rat,” she revealed.

A spokesperson for Donegal County Council said they are aware of the issue and are taking ongoing measures to address the issues faced by residents.

She said “Donegal County Council acknowledges that there was an issue in this area with vermin and the Council has carried out substantial works to address this issue and continues to monitor this area on an ongoing basis.”

Family forced to share bedroom after house is over-run by rats was last modified: November 17th, 2017 by Stephen