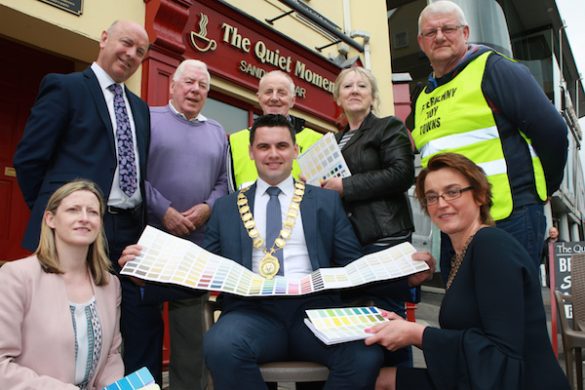 Donegal was very well represented in the final of the SuperValu Tidy Towns competition, with towns from across the county being commended for their hard work.

In the North West and West Region, 83 towns and villages competed to be named Ireland’s tidiest town, an accolade awarded to Westport in Mayo.

In the county awards, Letterkenny was titled the County Winner! Glenties was given a Highly Commended award, and Buncrana was also Commended. Kerrykeel achieved the Endeavour award for a remarkable improvement in score since 2016.

Carrigart was also given the Waste Prevention Award (Highly Commended) sponsored by the Environmental Protection Agency, and was the joint winner of the Gaeltacht Award Winner sponsored by Department of Culture, Heritage and the Gaeltacht, sharing the prize with Béal an Mhuirthead in Mayo.

The Minister for Rural and Community Development, Michael Ring TD, presented the awards to the towns at a prize-giving ceremony last night.

Minister Ring also announced a grant scheme for Tidy Towns committees that will enable each committee to apply for a grant of between €1000 and €4000 in recognition of the competition’s 60th anniversary next year.

Minister Ring said: “It is fantastic to have the opportunity this evening to meet TidyTowns groups from across the North West and Western region.

“These awards are just a small recognition for the efforts of so many volunteers who take pride in their home town and work tirelessly to make it a better place now and for future generations. This selfless effort and the generosity displayed by these volunteers makes a huge difference in our communities.

“We also recognise all the other TidyTowns groups, not here today, who are also committed to improving their community’s year on year but have yet to achieve formal recognition in the competition.

“I must make special mention of Westport, the overall regional winners and national winners of the Tidiest Large Town. Everyone in the town is proud of what they have achieved. Congratulations to them as well as all of today’s other prize-winners.

“2018 sees the 60th Anniversary of Tidy Towns and I am delighted to announce a €1.4 million grant scheme from my Department to Tidy Towns groups around the country.

“The Tidy Towns competition sponsored by SuperValu has made our country a better place to live in and to visit. The work is carried out on a voluntary basis and we all benefit from it. This investment by the Government will further enhance our towns and villages and represents great value for money.”

The Minister also thanked TidyTowns’ main sponsor SuperValu: “For 26 years SuperValu has been involved in this competition at local and national level and they have helped it to flourish and grow and continue to demonstrate a real commitment to supporting local communities. They have worked closely with Department officials to help make it the success it is today.”

Richard Lennon, SuperValu Regional Manager said: “At SuperValu we believe in building vibrant local communities and the SuperValu TidyTowns competition goes to the heart of what community is all about. The incredible dedication shown by the volunteers involved is truly admirable and continues to amaze us year after year.

“Their relentless commitment to working to build better local communities is what makes this competition the success it is today. As Ireland’s leading grocery retailer, with 219 stores across Ireland and retailers embedded in communities around the country, SuperValu is extremely proud to have sponsored TidyTowns for the past 26 years, one of the longest running sponsorships in Ireland.

“I am delighted to recognise the dedication of TidyTowns committees in the North West and West who are at the heart of their local communities, working tirelessly behind the scenes throughout the year to enhance their locality.”

Interest in the TidyTowns competition sponsored by SuperValu has been stronger than ever in recent years and with a record 870 communities entering the competition in 2017.