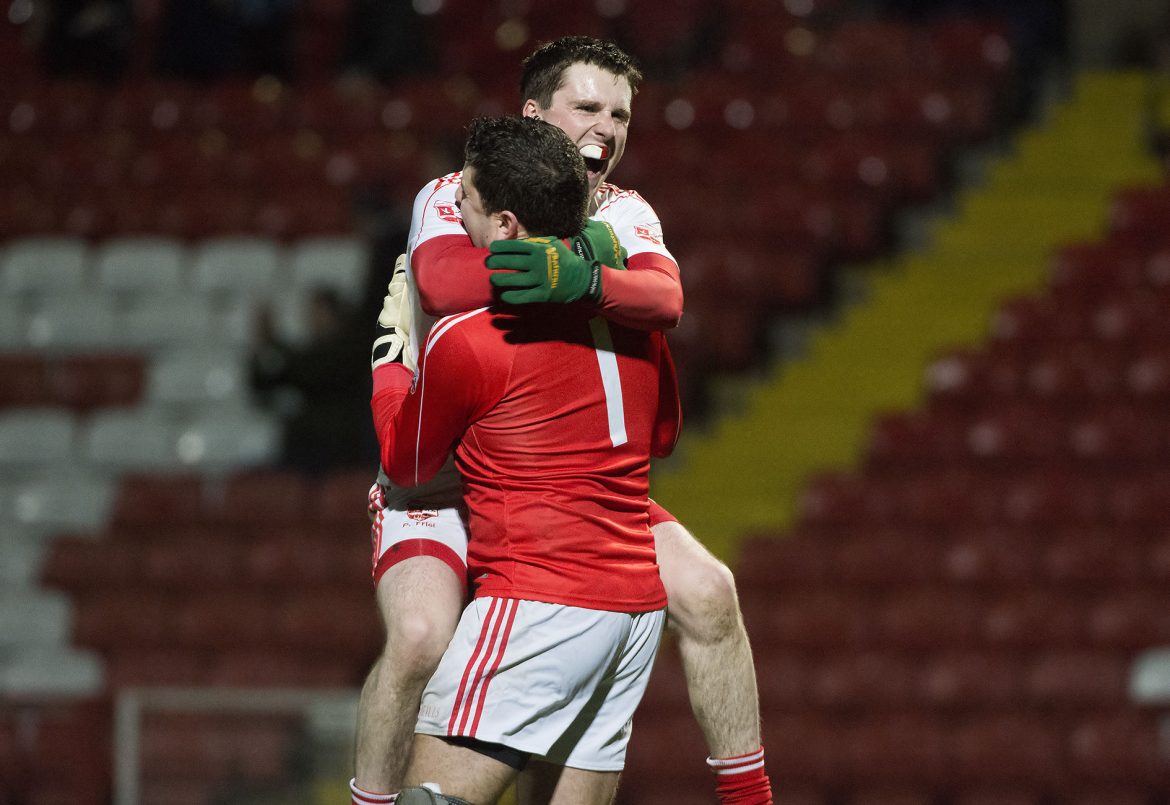 NAOMH COLMCILLE’S Daniel Clarke struck an injury time winner to send his team through to the final of the Ulster JFC on a dramatic night at Celtic Park in Derry.

It had been a worrying third quarter for the side from Newtowncunningham, who hadn’t scored since the 39th minute but in the third of four minutes of injury time, Clarke maintained his composure to slot over an awkward free on the left foot to see off Tattyreagh.

The Tyrone team had a chance just a  minute beforehand to slot over what would’ve been the lead point, only for James Darcy to fluff his effort short from an easier free than Clarke’s.

But in the end, Naomh Colmcille, who hadn’t trailed all evening against a team who were comfortable favourites with some bookmakers offering odds as low as 1/7, did enough to seal a spot in the final this coming Saturday against Fermanagh’s Belnaleck Art McMurroughs at Healy Park in Omagh.

It was a special evening for the club from right on the border, with Naomh Colmcille manager Ryan McKinley’s words to do it for the late club chairman James Dowds, who sadly passed away last week, ringing in the players’ ears as they took to the pitch.

Two excellent goals – one in each half – from Willie Gillespie and Ryan McErlean did the trick.

A competent start was essential and Naomh Colmcille defended well and used the long ball to good effect when required. After 12 minutes, they had forged a 0-3 to 0-1 lead, with Clarke, McErlean and Gillespie all finding their range.

There was certainly a sigh of relief, though, on 14 minutes when Tattyreagh’s Darcy played in Gareth Mimnagh and with the corner-forward, having manufactured space after cutting inside on his right, skewed his shot over the bar.

Tattyreagh soon levelled through a point from Johnny Harkin and then threatened the Naomh Colmcille goal again. Michael Lynch, who suffered an injury with broken bone in his hand in the quarter-final win over Ballymachugh, but bravely played tonight without a cast, made a heroic block at the feet of Harkin. From the follow-up, Naomh Colmcille goalkeeper John Roulstone saved excellently from Darcy.

If there was a stage in the first half that Naomh Colmcille looked to be struggling then that was it. But on 20 minutes they grabbed control courtesy of a fine individual goal from Gillespie, who picked up possession on the left flank before cutting inside and unleashing an unstoppable drive into the top corner of Niall Keyes’ goal.

When McErlean added another fine point, Naomh Colmcille were 1-4 to 0-4 in front and went in at half-time two to the good, 1-5 to 0-6 ahead with Gillespie adding another score and Darcy’s brace making up the Tyrone side’s interval total.

Both sides traded a point at the start of the second half, with Lynch pointing from a free and Darcy doing the same at the other end.

A second Naomh Colmcille goal really stoked the fire of belief and it was a bullet from McErlean on 39 minutes that Keyes just couldn’t keep out. That made it Naomh Colmcille 2-6 to Tattyreagh’s 0-7.

However, that was the start of a lean spell for Naomh Colmcille as the pre-match favourites threw the kitchen sink in a last ditch effort to keep their provincial aspirations alive.

Substitute Robert Porter scored a point and then, on 41 minutes, Tattyreagh mustered a goal to reignite their hopes. A fine ball into the square from Darcy was collected by Brendan Armstrong and he rounded Roulstone in a flash to score from close range. It was a one-point game, with Naomh Colmcille’s 2-7 to 1-8 lead looking precarious.

Tattyreagh dominated but could only find one more point, with Armstrong the scorer to level things up. Their case wasn’t helped by a black card for experienced centre-fielder Sean Gormley, although Naomh Colmcille substitute Michael Friel somehow avoided the same punishment for a similar and seemingly more obvious offence.

Darcy, in injury time, passed up on his chance to edge his team in front and Tattyreagh full-back John Gilmurray picked up a second yellow and subsequent red in injury time in the incident that lead to Clarke firing over the winner.