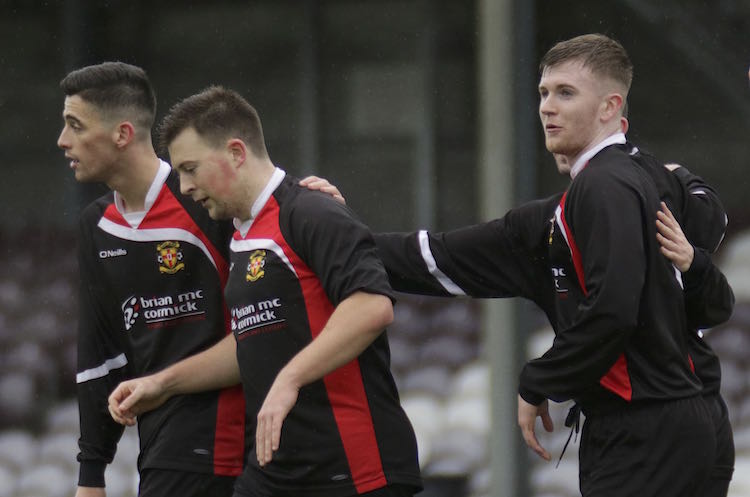 Goals in either half by Tony McNamee and Pajo Rafferty gave the Ulster Senior League their first win at the FAI Intermediate Inter-League Tournament in Galway.

It was hard-earned, but Anthony Gorman’s men got to winning ways, even if they had to endure some nervy moments.

The lead goal arrived when, after a neat passage on the edge of the Connacht box between Rafferty and Mark Moran, the latter’s first-time pass invited a shot from McNamee. The Fanad United attacker picked his sport perfectly in the bottom corner to put his men in front.

The USL were made pay for some squandered chances when former Finn Harps man Barry O’Mahoney clipped in an equaliser, but Rafferty’s goal, three minutes into the second half, saw the USL regain the driver’s seat.

Rafferty seized the moment when the ball broke into his path and the Letterkenny Rovers frontman coolly slotted home.

In a unique twist to this one, the Gorman brothers from Letterkenny were in opposing dugouts with Gareth Gorman taking charge of the Connacht FA side, pitting his wits against older brother Anthony.

Just four minutes after McNamee’s opener, the width of a post denied the USL a second. Laurence Toland did well on the left-hand side to create an opening before threading through for Pajo Rafferty. After eyeing up the target, Rafferty saw a deft shot rebound back off the inside of the post to safety.

The USL XI contained just two survivors – defenders Peter Doherty and Lee Toland – from the side that began last night’s 2-1 defeat to Leinster at Mervue.

Sean McCarron missed out due to the ankle injury that enforced his early departure last night while former FAI Intermediate Player of the Year Malachy McDermott failed a late fitness test.

The USL could, and should, have doubled their advantage on the half-hour. Rafferty fed Moran, who was denied by Forde while the ball fell awkwardly for Oisin McMenamin who was unable to get his shot on target.

It wasn’t all one-way traffic, however and Connacht got a deserved equaliser on the stroke of half-time as O’Mahoney fired off the underside of the bar and beyond Rory Kelly, the USL goalkeeper.

Rafferty restored the USL advantage early in the second half, but the game stayed in the melting pot to the finish and Kelly did well to save from Ronan Caldwell in added time.

USL hold on for win over Connacht FA at Inter-League Tournament was last modified: November 18th, 2017 by Chris McNulty