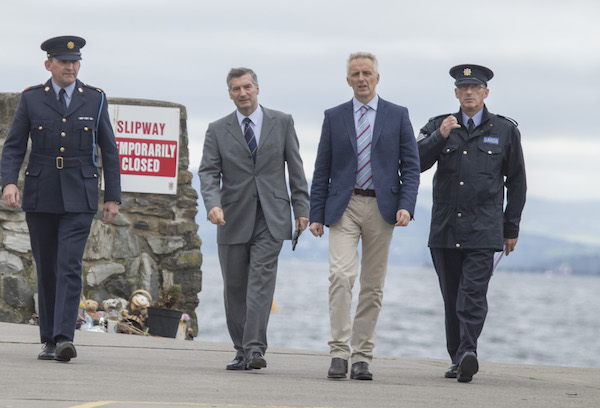 The jury at the inquest into the deaths of five people in the Buncrana Pier tragedy has found they died as a result of drowning.

The jury of five men and four women took more than half an hour to return findings of death by misadventure.

The jury also issued one recommendation at the suggestion of a number from coroner Dr Denis McCauley.

The jury recommended that Water Safety Ireland take a prominent role in advising and working with all interested parties to introduce best international practice for safety on slipways and piers.

The jury foreman added that they hoped this could be introduced as quickly as possible in light of the Buncrana tragedy.

Coroner Dr Denis McCauley paid tribute to all involved in the incident including the RNLI, Gardai, Fire Service and all emergency services.

He said that all at the inquest and himself as a father cannot even imagine what Louis James and members of the McGrotty family were going through.

“Each death will be felt differently but it is still eternally tragic and I’d like to extend my condolences to all families,” he said.

Garda Inspector David Murphy said that the impact of the events of March 20th, 2016 has been felt in Derry but also in Buncrana, Donegal, across the country and even further afield.

He paid tribute to the members of the emergency services who volunteered alongside their everyday jobs such as delivering oil or making gates.

He paid particular tribute to Davitt Walsh who managed to rescue a child from the sinking jeep.

He said “His was such a courageous act. He is an ordinary man who did an extraordinary thing which he should be commended for.”

Earlier pathologist Dr Katrina Dillon had given her medical evidence and said all five people had died as a result of drowning.

* The finding of ‘misadventure’ meant jurors thought risks were associated on the day or were taken which may have increased the risk of the event happening.