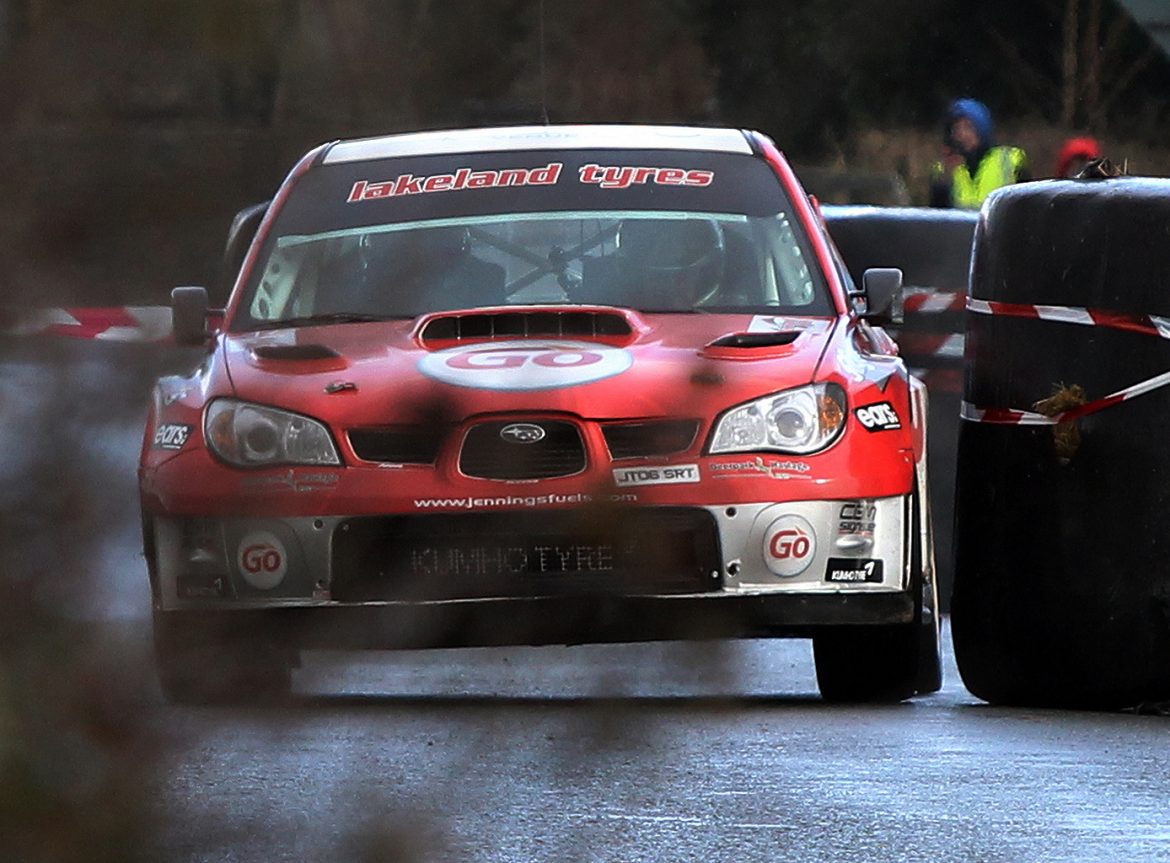 Recently the Galway Motor Club announced they wouldn’t be running their iconic season opener in 2018.

The Galway International Rally is an event that brought so many great memories to drivers and spectators alike over its 45 years history.

In February this year the amber fuel light was flashing for the club but they decided to nurse the event onto the start ramp even though the insurance cost was going through the roof. They say they will be back next year. But things will not be the same. 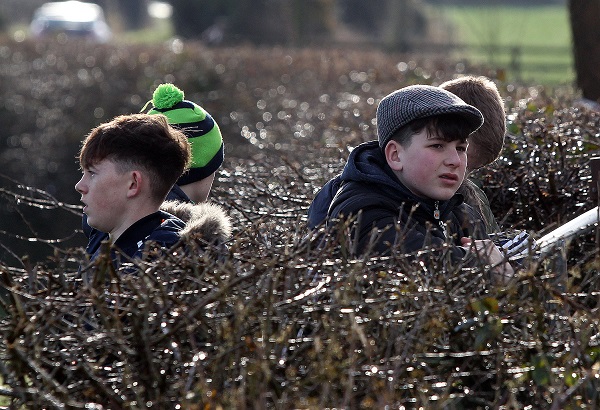 The next generation of Rally fans waiting for the heroes to arrive on what could be the last Galway Rally as we know it. Photo Brian McDaid

The Galway International is now getting very like many iconic shop fronts in the towns along the N17. The name is still above the door but support has gone and very little life if any is left inside. The Motors clubs have done their level best to keep things going through these bad times. But the support is not there, be it from the governing body or the public.

The Galway Story
Everyone who has any interest in rallying has “A Galway story” in them, be it driver or spectator. It was always the start of the rallying season, it’s the most unlikely place to end up.

Pelted with rain, hail or even snow but we all have done it at one time or another.

Study Hall
It was St. Eunan’s College of all places that brought memories flooding back this week. I was covering their Senior School Prize Giving. The special guest on the night was the Bishop of Raphoe Alan Mc Guckian and while presenting the sporting achievement awards he quoted Eric Liddell:

“I believe God made me for a purpose, but he also made me fast” 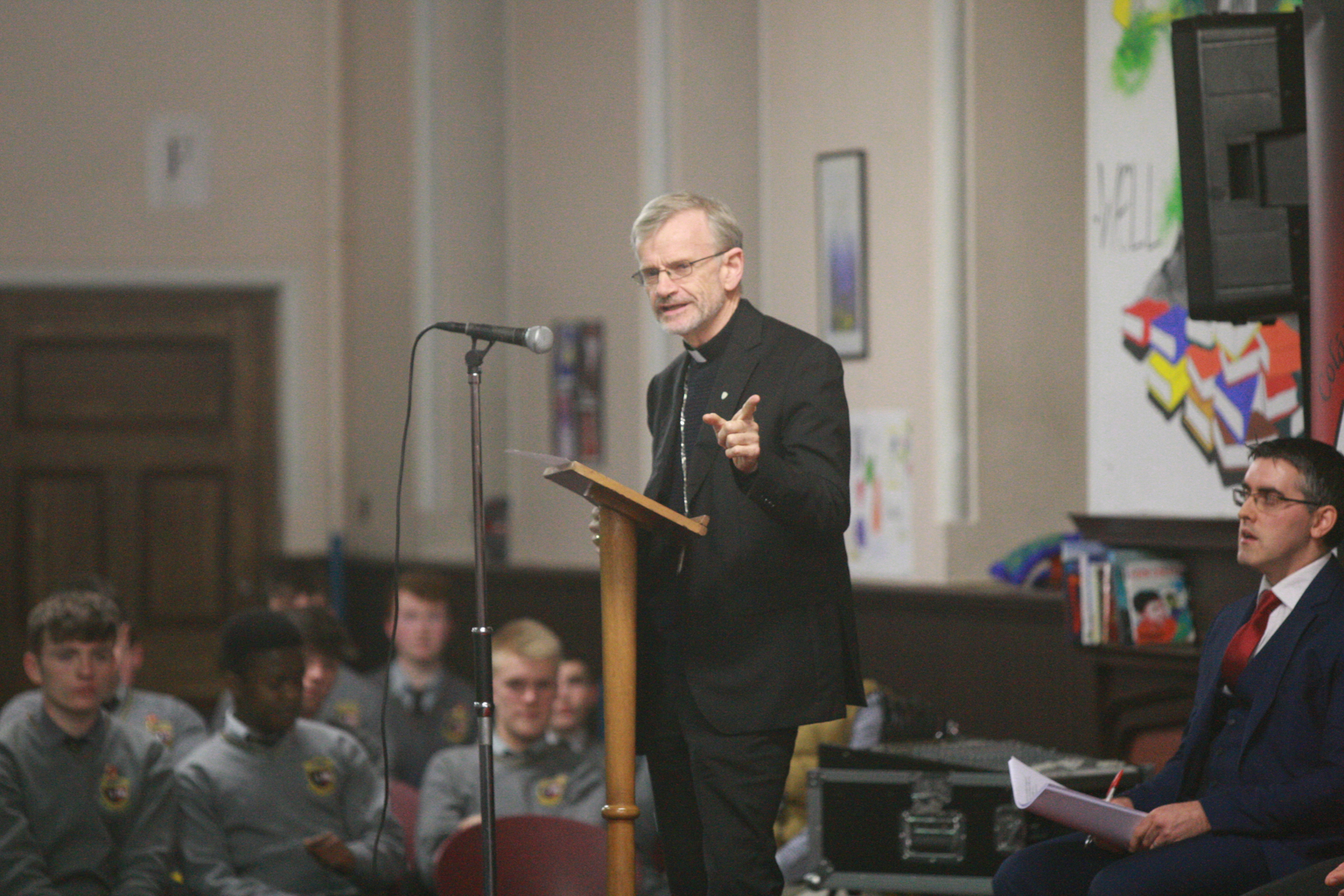 Special guest at St. Eunan’s College Prize Giving Bishop of Raphoe Alan Mc Guckian who recalled a quote from Eric Liddel from Chariots of Fire, ÒI believe God made me for a purpose, but he also made me fastÓ Photo Brian McDaid.

The presentations were made in the old study hall, a place I once did a lot of daydreaming in and did very little work. The view of him addressing the scholars in the hall brought me straight back to the seventies when I sat where they sat thinking of speed of a different kind.

The last navigator to win this year’s Galway, Rory Kennedy, also sat once in this study hall as a boy, and for him his dreams came through when he was asked to get special permission to leave the study hall in the summer of 1979 while sitting his Leaving Certificate exam to study a different paper to navigate James Cullen on his first Donegal International Rally! 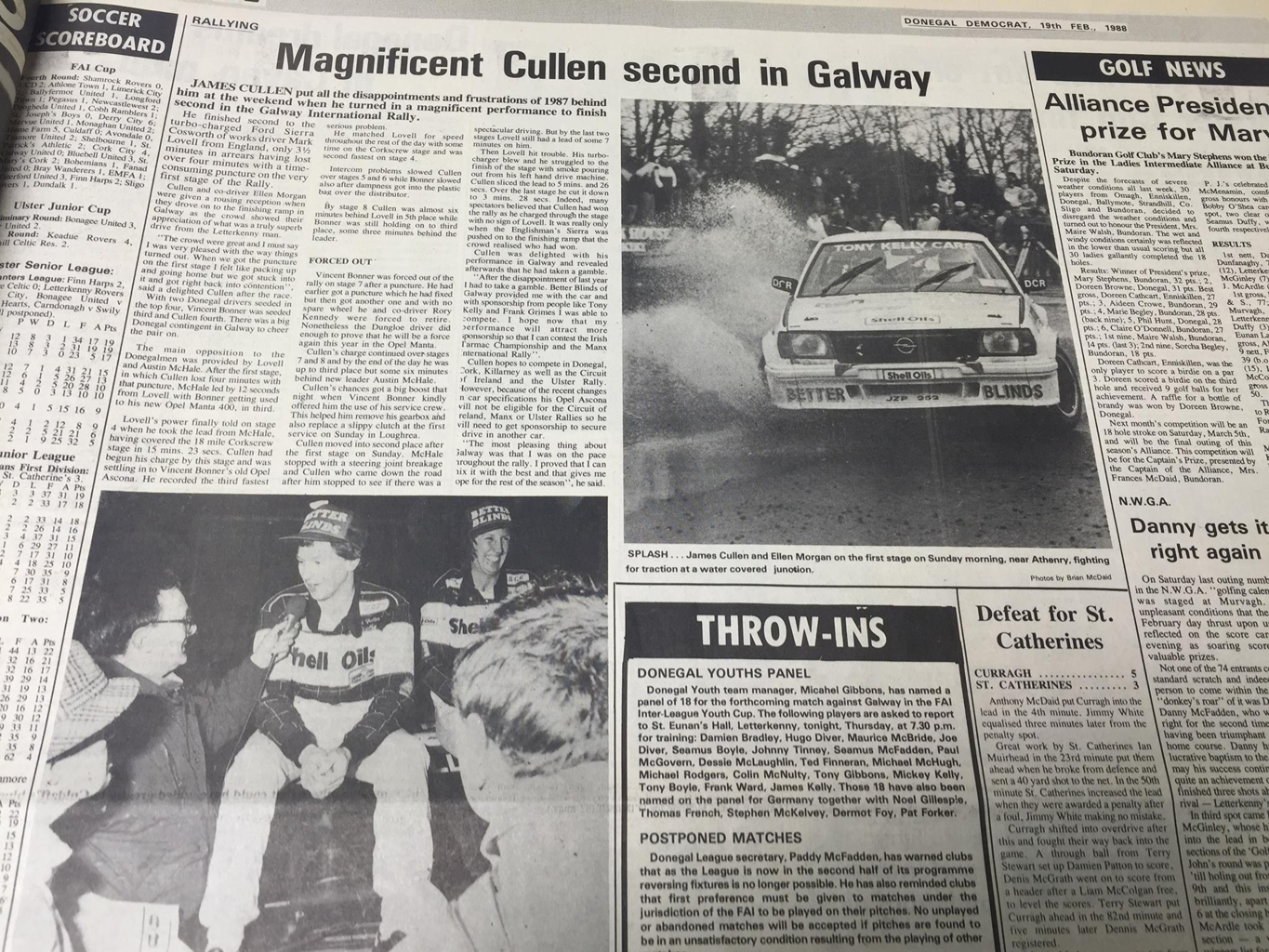 My report on James Cullen on his way to second over all 1988 Galway Rally.

Famous Five!
My Galway story is like an Enid Blyton’s adventure gone wrong. For the purpose of this story I’ll use our CB handles instead of our names which was the in thing in them days before social media in the late 70s and early 80s.

The red Mk2 was a Red Roscommon Registered Ford Escort Mk2 which took us on our big trip. Our adventure started over a plate of chip in a café in Letterkenny on a wet Saturday afternoon. The Rubber Band came up with the bright idea that we all should head down to the Galway Rally! He was a year or two older than the rest of us and had his own car, a red ford escort. 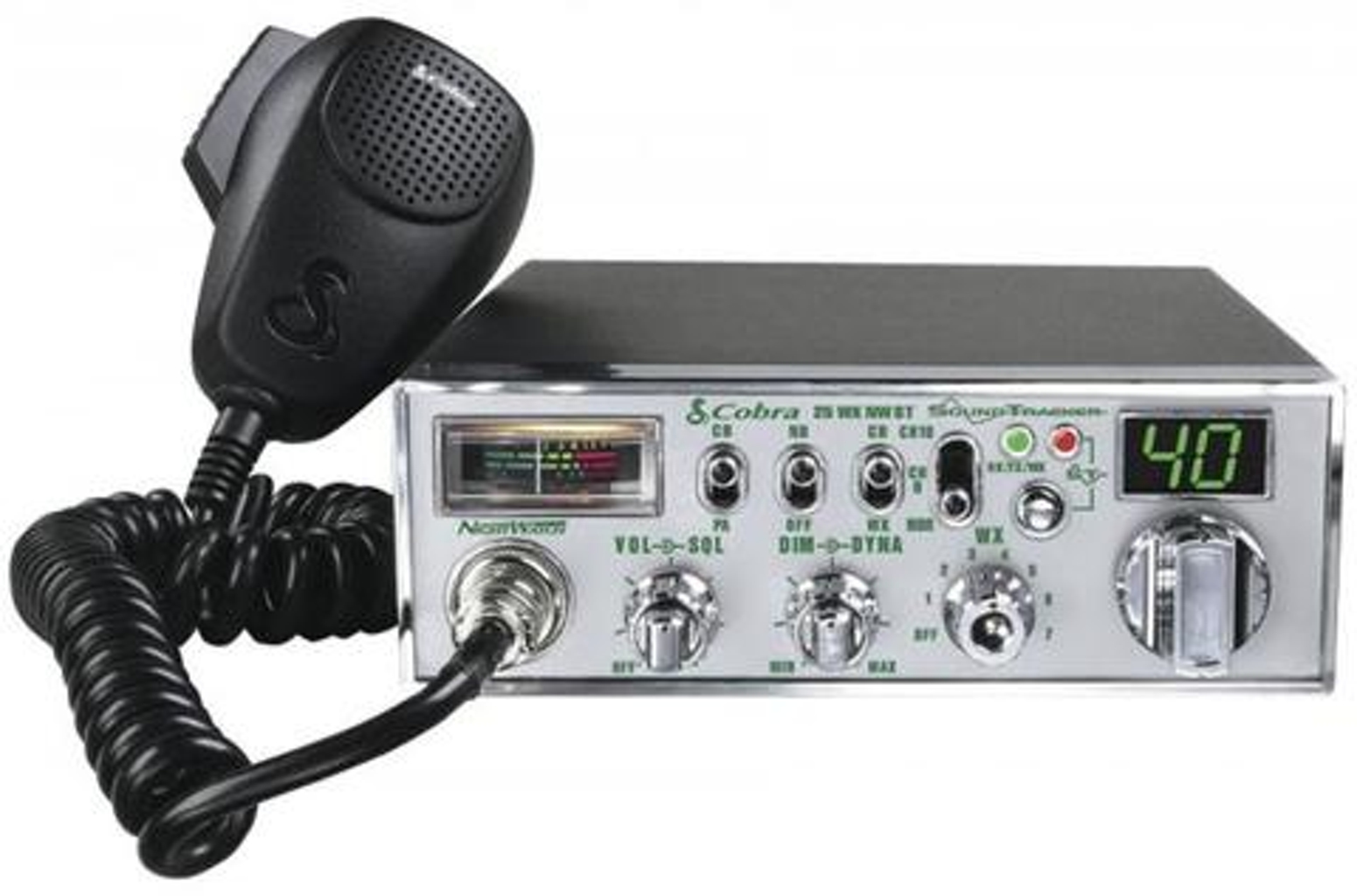 The Old 40 channel CB Radio the in thing before social media.

Road trip
Our famous five set off on a Saturday evening with not one of us ever being away from home on our own before. We were between 15 and 17 years old and all big motorsport fans. “Oh how we laughed” as they say in all good Famous Five stories when we got lost for the first time on the other side of Sligo.

The Jam (who was a ringer for Fergal Sharkey from the Undertones) had an aunt in Galway and he had assured us that he knew the way. That was the last time we were going to listen to him!

Warm Welcome
When we eventually got to Galway it was late on Saturday night. We got a really warm welcome when we arrived at Eyre Square, or so we thought! Those that were tooting their car horns at us were actually letting us know that we were heading the wrong way up a one-way street.

Something that none of us ever had seen before. Then thinking we could do as we do at a Donegal rally we thought we would take a walk in around the rally cars in Parc Férme behind leisure land in Salthill. Two security guards with two very hungry Alsatians soon put that notion out of our heads

Session!
As far as I know that trip to Galway was the first time that any of the four of us ever had a drink. We had a whip round and picked up the courage to go to an off-licence to buy our drink for the night. After figuring how to get the caps off the bottles without an opener we stood in the car park in Salthill in the dark with a bottle each saying to each other, “you go first” Nah “you go” Then the four of us all took a mouthful and waited to see what happened. Nothing happened. Then Rubber Band downed the full stumpy bottle of Heineken.

And before it got as far as his tummy it came straight back up again! serious stuff! Believing we were now all full we headed off to get something to eat to settle our stomachs.

We had no accommodation for the night as we had very little money with us so we parked up the red escort and the four of us slept in the car. Well we tried to sleep anyway through a freezing February night of farts and feet.

The following morning we were awakened to the sound of rally cars firing up in Parc Férme. It was a case of follow the leader as we hadn’t a clue where the rally was on. We ended up in Portumna which we were pronouncing as Port-numa and managed to see just one stage of the Galway International Rally.

Ger Buckley won the rally that year in the pouring rain with Jimmy McRea in his new Opel Ascona on his heels.

Bertie Fisher was out on the wide track ex-works Monte Carlo Mk 2 Ford Escort, a bit like our own Red Escort but with two less doors. We headed back to Donegal happy with the first of many Galway Internationals under our belt. We still had two small bottles of Heineken left from the one six-pack we bought for our big night out on the tiles so we chucked the bottles out the window in case there might be the slightest smell of drink in the car.

This year I went down to cover the Galway rally for this motoring column known it might have been the last Galway Rally as we know it. Letterkenny’s Rory Kennedy and Gary Jennings won the event.

This is the deepest cut into rallying in Ireland so far. The loss of this rally will have a big knock on effect on rallying in 2018.

The high cost of insurance and claim culture that has developed are the big factors that have brought the Galway rally to and end for next year anyway.

Snow
As per usual in Donegal we will wake up some morning soon and the place will be covered in snow! The morning rush hour will lose the word “rush” from it as we lose our temper with everyone around us as towns and villages and wee braes come to a standstill.

Driving in Donegal has bottlenecks all over the county with high volumes of traffic all going the same way at the same time. The slightest blockage in any of these arteries at peak pressure times and the flow of traffic comes to a complete stop.

So if we add in a winters morning to the mix what do we end up with.

A recent survey suggested that the most of us don’t have a clue what to do when road conditions become treacherous other than to lay the blame with the poor gritter who has to go out before everyone else in the worst of conditions and try and get a dusting of grit and salt down to try in make it a bit better for those that follow him on the road. 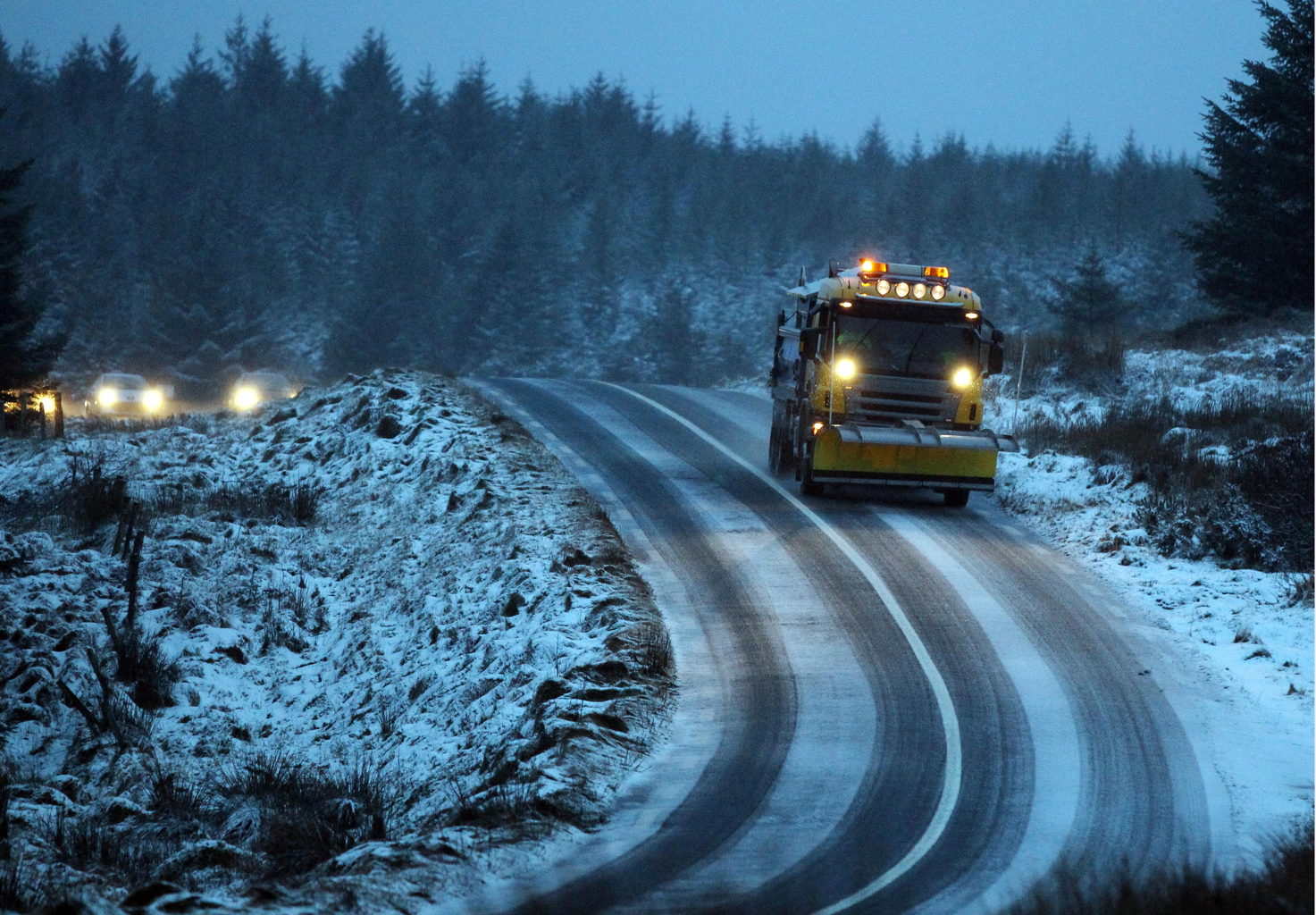 A council gritters deals with ice and snow on the Meanaroy mountain pass at the start of this year. Photo Brian McDaid

Good tyres are a must, a massive sprinkling of common sense will go along way when the snow and slippery roads arrive. Only yourself will know how much you are in control behind the wheel when road conditions get poor.

A good tip is to think of all of your journeys in bad weather as the longest trip you’ll take like a trip to Dublin or somewhere. When you have a long journey ahead, you check tyres, make sure all your fluid levels are right like engine oil and window washers.

You are also aware of imminent bad weather, by doing this you reduce so many possible risks. In bad weather just think “long journeys” do the checks watch the weather and most important consider the importance of the journey. There are no heroes in the snow.