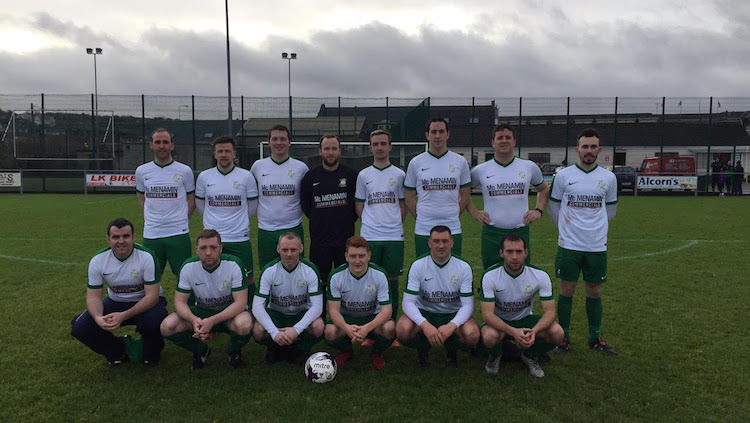 Aidan McLaughlin’s deadly treble fired Bonagee United into the next round of the Ulster Junior Cup.

McLaughlin, back in Bonagee’s Donegal League outfit this year after many years in the Ulster Senior League, broke the deadlock in the second minutes, but Bonagee didn’t put this one to bed until the final 25 minutes.

McLaughlin was the difference between the sides, his penalty box prowess undoing Convoy, who had Joe McGill sent off for a handball infringement that resulted in McLaughlin’s second goal,

Conor Parke was central to the opener and McLaughlin applied the finish past Lee Boyd at the far post.

Bonagee probed and Eamonn Cannon was denied by Boyd soon after as they sought about killing the tie off.

But Convoy had their moments in the first half.

Anthony Bogle broke in on goal, but was thwarted by John Carr before Shaun McGinley cleared the lines for the hosts.

Darren Harvey’s attempt to get the visitors back on terms was always rising after his free kick broke off the Convoy wall.

In the dying minutes of the first half, McGill had the ball in the net, but the effort was chalked off as the Convoy midfielder was deemed to have strayed offside.

Bonagee doubled the lead on 68 minutes. Paddy O’Loan brilliantly rose to nod in from a corner and his delicate header from 12 yards looked destined for the net until it was blocked, seemingly by the hand of McGill, who was given a red card for his troubles.

McLaughlin stepped up and beat Ciaran Bonner, who replaced Boyd at half-time, with the penalty.

McLaughlin completed his hat-trick seven minutes later, heading in from a delicious Drew Connolly cross from the left.

Shane Kelly might have added a fourth, but hesitated a fraction too long, while sub Noel O’Donnell saw a powerful effort beaten away.

These teams meet again on Friday evening in the League at Orchard Park.