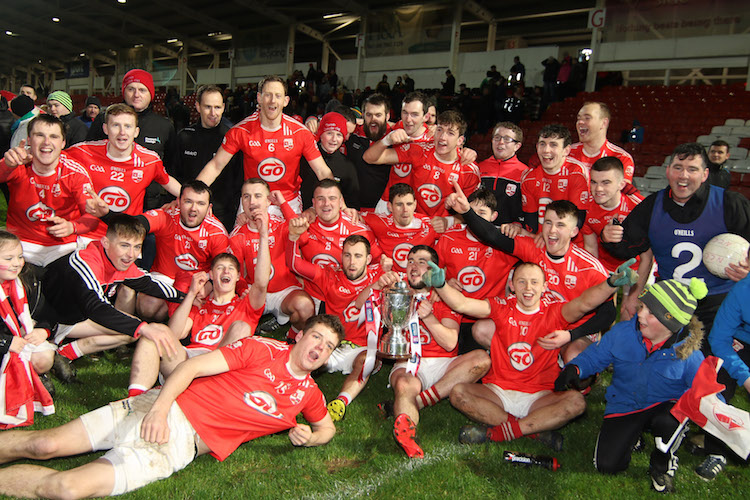 Ryan McKinley has urged Donegal manager Declan Bonner to give some of Naomh Colmcille’s leading lights a go at trying to make it onto the county squad.

McKinley was speaking in the wake of Naomh Colmcille’s historic Ulster Junior final win over Belnaleck on Saturday night at Celtic Park.

Michael Lynch and Daniel Clarke were members of the Ulster-winning Donegal U21 squad this year.

“I’d like to think that the likes of Michael, Daniel and Alex (Devenney) might get a shout with the Donegal team,” McKinley said.

“When you go through the rest of the junior champions, Fermanagh had four inter-county players on tonight, Monaghan had three, Tyrone had two, Antrim had three.

“The Donegal team had none. It’s about time they started looking down the leagues for players. The talent is definitely there.”

Naomh Colmcille’s big men all stood up on Saturday evening and each had their own key moments in a game that will go down in the annals of Pairc Colmcille.

McKinley said: “Our main players stood up: Matthew Crossan, William Lynch, Michael Lynch, Alex Devenney. Our defence was brilliant, I couldn’t fault any of them.

“From 1 to 30, the dedication we’ve had all year has been fantastic.”

On December 9, McKinley takes his men to Edinburgh to meet Dunedin Connollys in an All-Ireland Junior quarter-final.

He said: “We’re Ulster Champions on merit.  Hopefully we can push on now and win the All-Ireland.”